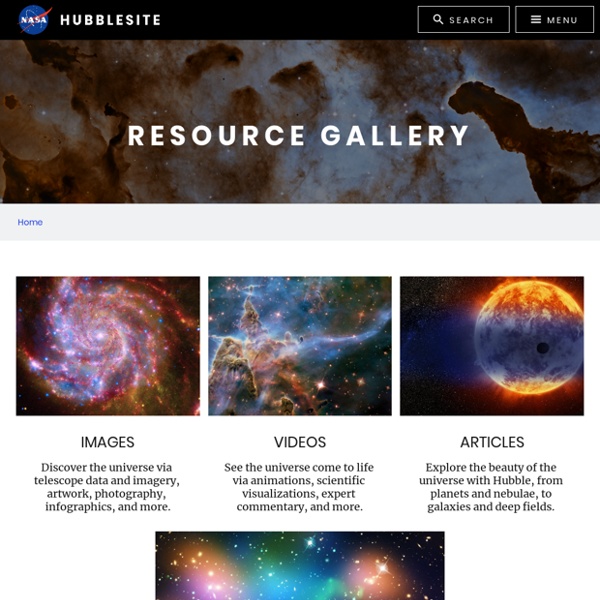 Hubble data predicts Milky Way galactic collision When Galaxies Collide! It sounds like an early science fiction novel. However, analysis of Hubble measurements shows that our own Milky Way galaxy is moving toward a head-on collision with our nearest neighbor, the Andromeda galaxy (also known as M31). The collision will start in about four billion years, and over the following three billion years the two spiral galaxies will coalesce into a large elliptical galaxy. 10 Psychological Experiments That Went Horribly Wrong Psychology as we know it is a relatively young science, but since its inception it has helped us to gain a greater understanding of ourselves and our interactions with the world. Many psychological experiments have been valid and ethical, allowing researchers to make new treatments and therapies available, and giving other insights into our motivations and actions. Sadly, others have ended up backfiring horribly — ruining lives and shaming the profession.

SCHOPENHAUER'S 38 STRATAGEMS, OR 38 WAYS TO WIN AN ARGUMENT Arthur Schopenhauer (1788-1860), was a brilliant German philosopher. These 38 Stratagems are excerpts from "The Art of Controversy", first translated into English and published in 1896. Carry your opponent's proposition beyond its natural limits; exaggerate it. Kevin Kirkpatrick Special makeup effets artist Kevin Kirkpatrick made these prosthetic models of Beavis and Butt-Head to show what the cartoon legends would look like in real life. via (buzzfeed) Total Solar Eclipse 2012 photos, near Mount Carbine, Queensland, Australia November 14, Queensland, Australia Homepage Astrophotos Australia 2012 photos Purchase Photos! Total Solar Eclipse of November 14, 2012, as seen from a hilltop about 20 miles west of the Outback town of Mount Carbine, Queensland, along the Mulligan Highway (Peninsula Development Road), a road only paved in recent years. Heading inland to get away from coastal showers and clouds which were promising to interfere with the viewing, we drove some 150 miles into the outback to find a good spot the day before and settled upon a remote hillside, up along a dirt track that pulled away from the main road.

Y-chromosomal Adam In human genetics, Y-chromosomal Adam (Y-MRCA) is a hypothetical name given to the most recent common ancestor (MRCA) from whom all currently living people are descended patrilineally (tracing back only along the paternal or male lines of their family tree). However, the title is not permanently fixed on a single individual (see below). Y-chromosomal Adam is named after the biblical Adam, but the bearer of the chromosome was not the only human male alive during his time.[1] His other male contemporaries could also have descendants alive today, but not, by definition, solely through patrilineal descent. Analogous to Y-chromosomal Adam, Mitochondrial Eve is the woman from whom all living humans are descended matrilineally, who lived about 140,000 to 200,000 years ago in Africa. The estimate is based on inherited mtDNA though mothers.

Solar System, Solar System Information Our Cosmic Neighborhood From our small world we have gazed upon the cosmic ocean for thousands of years. Ancient astronomers observed points of light that appeared to move among the stars. Hack a Dudley combination lock in 10 minutes « James's Place Don’t believe me? Well okay, it’ll probably take longer than that the first couple of times. But it really isn’t difficult to get the combination for a Dudley you’ve never seen before. At first it seems like an impossible task. Pictures of Clouds and Sunsets - What a Wonderful World Long’s Peak – Sunset Pictures of Clouds and Sunsets credit: David Evenson These pictures of clouds, nature and landscape are really inspirational. Clouds are created when rising air, through expansion, cools to the point where some of the water vapor molecules “clump together” faster than they are torn apart by their thermal energy. Some of that (invisible) water vapor condenses to form (visible) cloud droplets or ice crystals.

Hubble zooms in on a space oddity A strange, glowing green cloud of gas that has mystified astronomers since its discovery in 2007 has been studied by Hubble. The cloud of gas is lit up by the bright light of a nearby quasar, and shows signs of ongoing star formation. One of the strangest space objects ever seen is being scrutinised by the penetrating vision of the NASA/ESA Hubble Space Telescope. A mysterious, glowing green blob of gas is floating in space near a spiral galaxy. Hubble uncovered delicate filaments of gas and a pocket of young star clusters in the giant object, which is the size of the Milky Way. The Hubble revelations are the latest finds in an ongoing probe of Hanny’s Voorwerp (Hanny’s Object in Dutch).

Hubble Telescope Reveals Deepest View of Universe Ever The Hubble Space Telescope has captured the farthest-ever view into the universe, a photo that reveals thousands of galaxies billions of light-years away. The picture, called eXtreme Deep Field, or XDF, combines 10 years of Hubble telescope views of one patch of sky. Only the accumulated light gathered over so many observation sessions can reveal such distant objects, some of which are one ten-billionth the brightness that the human eye can see. The photo is a sequel to the original "Hubble Ultra Deep Field," a picture the Hubble Space Telescope took in 2003 and 2004 that collected light over many hours to reveal thousands of distant galaxies in what was the deepest view of the universe so far. The XDF goes even farther, peering back 13.2 billion years into the universe's past.