This One Leadership Quality Will Make or Break You 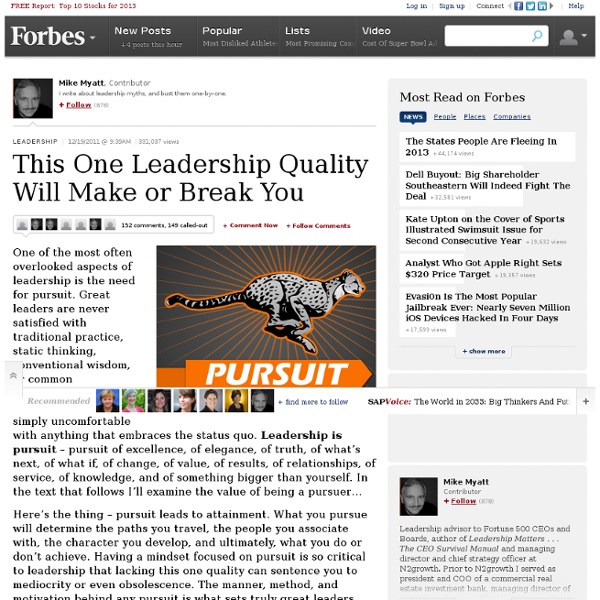 #gamedev Lead Quick Start Guide Congratulations! You’re a lead. Now what? In general, whatever skills you’ve demonstrated that got you to this point aren’t the same things you’ll be doing from here on out (or at least not as much.) Not everyone is suited to a lead role or would be happy in one. Trust I believe you have every chance to excel as a lead; Otherwise, you wouldn’t be one. What follows is a entry-level description of my expectations for a #gamedev lead. I expect you to read this. Do not skim. Is there anything here that you don’t feel is completely clear? Congratulations! There is no one thing that has more of an impact on the quality of the game, the cost of development, the engagement and happiness of the gamedevs and the future of the studio than leadership. I expect your process to reflect you. I asked some gamedevs recently to list the most common reasons why gamedev sucks: All of these problems are leadership problems. You must be wary of any process that purports to address these issues.

How to Focus | strategic learning The Ten Most Annoying Management Terms Of 2011 We are nearly at the end of 2011 and another year of mayhem behind. We will be judging our 2011 Non-Predictions and trying to dream up some new ones for 2012 in the next fortnight or so but this week we have been able to get some long needed admin done. With it came a realisation that even if the financial industry is suffering the creative management community has been in full swing dreaming up new terms and phrases to camouflage the blindingly obvious. The evolution of ‘management speak’ means some phrases die and some survive and flourish. TMM really don't know what determines the success of one term or phrase over another other than, as with the arts, adoption and patronage by the most respected in the field. TMM hope that this year’s rash of newcomers all die off naturally but we would like to help with a shove into their deserved obscurity. So here are TMM's top ten annoying phrases of 2011 (even if some are older) that we would like to see the back of. Happy New Year

10 Things Employers & Recruiters Want from You Every job hunter has the same question: What do employers look for, and how can I best show I’ve got “it?” A few days ago, I attended a panel discussion for career coaches led by three of the leading recruiters in Greater Boston. Each recruiter had the assignment of explaining their view of today’s hiring environment, what employers are looking for, and then to give a few tips for candidates. The recruiters deal with different specialties, including: Human Resources, Medical Devices, Information Technologies (IT), and Marketing. Nonetheless they agreed on one thing: Five years ago, if an employer listed a job with 8-10 bullet points of “requirements,” a candidate might have been hired if he/she only had 3-4 of them. It comes as no surprise they all report both recruiters and companies are being inundated by resumes, as more people are chasing fewer and fewer jobs. What Employers Want To Hear: Things Recruiters Want To Hear: I offer an initial free consultation to any job hunter.

Tuning People, Processes, and Projects to Power Results » Blog Archive » Managing in Mayberry: An examination of three distinct leadership styles ©2001, 2010 Don Gray and Dan Starr Near the Blue Ridge Mountains in North Carolina, not far from where you think it should be, there really is a town called Mayberry. Although the main highway bypassed the town years ago, the namesake for the popular 1960s television series is still a bustling community, and a fair amount of traffic enters Mayberry’s downtown from the north on the US Highway 52 business spur every morning. In town for a week of consulting work, we were able to observe the recent road construction along that route and watched a trio of local citizens demonstrate their own unique management styles. When road work just north of town closed Business 52, all the traffic entering town from the north had to take the 52 bypass around to the west side of town and enter the downtown on Key Street. Figure 1 Three Approaches to Managing Being a take-charge guy, the officer on duty (we’ll call him Barney) arrived at the scene Monday and quickly sized up the situation. Micromanagement

Positive Intelligence | leadership 3.0 How I Stopped Romanticizing Leadership And Learned To Be A Manager by Linda Hill & Kent Lineback | 9:40 AM December 14, 2011 One of Kent’s friends — we’ll call him Roy — is a master craftsman who owns a small business that makes custom wood furniture. After making some cutbacks in 2009, his little company still employs three fine woodworkers, an office supervisor/customer service rep, and an apprentice. What makes Roy unusual is that when he founded his firm a dozen years ago, he realized he knew nothing about business. What he’s learned in the past few years is that, as he says, “I’m a leader, not a manager. Management vs. leadership — it’s a distinction we all hear over and over these days. Some years ago, management was the more inclusive term and included leadership — along with motivating, planning, communicating, organizing and the like — as one of many functions necessary to make groups of people productive. Most writers about leadership then and now explicitly note the continuing importance of management.

Why You Didn’t Get An Interview Crying in your beer This is a bummer of a job market for librarians, and if you’re fresh out of library school you are probably crying in your beer, wondering why you didn’t get a degree in something practical and career-oriented, like medieval cookery. But a few months back a newish librarian asked me in frustration why she was having a hard time getting interviews — let alone job offers — and we chatted back and forth on Facebook. Let me attempt to sum up what I shared. The job market sucks. Employers seek a known quantity. Your c.v. and cover letter need work. This question is important not only for what you say, but how you say it. Take your c.v. and cover letter to a mentor or friend and make sure they really sing to the position you are applying for–and that they are typo-free. Probably the most frequent issue I see in cover letters is a failure to address the responsibilities of the position. You are not the main event. May I offer one key tip? Plus, see above, TJMS.

The Magic of Doing One Thing at a Time - Tony Schwartz by Tony Schwartz | 8:53 AM March 14, 2012 Why is it that between 25% and 50% of people report feeling overwhelmed or burned out at work? It’s not just the number of hours we’re working, but also the fact that we spend too many continuous hours juggling too many things at the same time. What we’ve lost, above all, are stopping points, finish lines and boundaries. Technology has blurred them beyond recognition. Tell the truth: Do you answer email during conference calls (and sometimes even during calls with one other person)? The biggest cost — assuming you don’t crash — is to your productivity. But most insidiously, it’s because if you’re always doing something, you’re relentlessly burning down your available reservoir of energy over the course of every day, so you have less available with every passing hour. I know this from my own experience. If you’re a manager, here are three policies worth promoting: 1. 2. 3. It’s also up to individuals to set their own boundaries. 1. 2. 3.

5 Habits of Highly Effective Communicators 1.9K Flares Filament.io 1.9K Flares × Have you ever walked away from talking with someone that you’ve just met and thought to yourself “Wow, this was one of the best conversations I’ve ever had!”? I’ve recently had one of those and at first I quite selfishly concluded “Wow, I’m a great communicator”. But then I realized, hang on a second, I think this other person was the reason I felt so good about this talk, how did he do that? I started to think about a few of the things this person did, that made me feel so comfortable and open to speak with him. So what I’ve come up with are 5 of the most effective habits famous communicators have used for hundreds of years. Let’s dig in: 1. The word conversation generally brings to mind talking—at least for me. You might have heard of active listening before. Stephen Covey’s book The 7 Habits of Highly Effective People is also a great one to read for tips on improving your listening skills (and, in fact, how you build relationships in general). 2.

Positive Intelligence Artwork: Yue Minjun, Laughing Painter, 2003, oil on canvas, 70 x 50 cm In July 2010 Burt’s Bees, a personal-care products company, was undergoing enormous change as it began a global expansion into 19 new countries. In this kind of high-pressure situation, many leaders pester their deputies with frequent meetings or flood their in-boxes with urgent demands. In doing so, managers jack up everyone’s anxiety level, which activates the portion of the brain that processes threats—the amygdala—and steals resources from the prefrontal cortex, which is responsible for effective problem solving. Burt’s Bees’s then-CEO, John Replogle, took a different tack. That outcome shouldn’t surprise us. In fact, it works the other way around: People who cultivate a positive mind-set perform better in the face of challenge. Another common misconception is that our genetics, our environment, or a combination of the two determines how happy we are. Develop New Habits