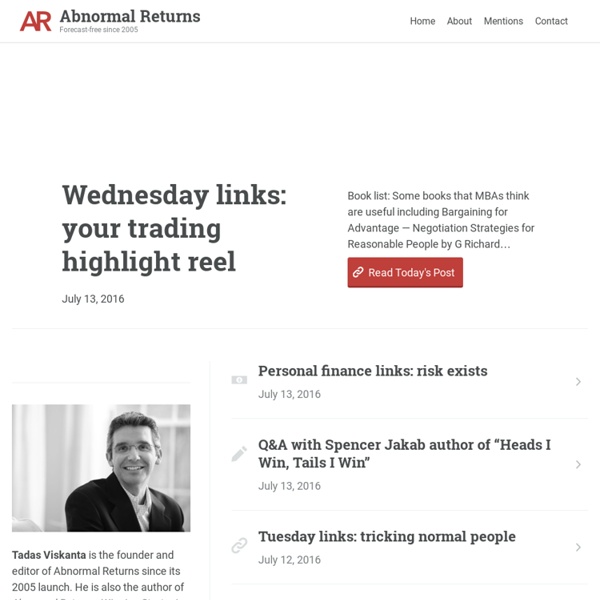 Posted by: abnormalreturns, April 24th, 2014 at 12:51 pm Quote of the day Scott Krisiloff, “If we are leaving the 20th century behind, then maybe we have to leave behind our concept of fair returns on investment. Dividends are one signal telling us to lower our expectations.” (Avondale Asset) Chart of the day

Related:  Blogs and Podcasts About Investing

My 30-year Forecast - Bogleheads 555 wrote: Rodc wrote: 555 wrote:Rodc, kv968, why are you pretending that the "Risk Estimate" column is not there when it is? Economics Roundtable January 2014 Payroll Employment We are getting closer to the previous peak. Click on the image to get a bigger version. Jobs The best summary of the state of our economy is the graph (below) of employment as a fraction of population for people over 16 years old. Eurozone Crisis: In the Eye of the Storm The Eurozone crisis has been in retreat since the introduction of the European Central Bank’s (ECB) three-year long-term refinancing operations (LTROs) in late December 2011. At the European Council Meeting in early March, journalists who cover the crisis fretted that boredom loomed. The current lull does not indicate that the Eurozone is in the clear, but rather it is simply in the eye of the storm, and more drama inevitably awaits. Extend and pretend So far, there are three key mechanisms the troika — the European Commission, International Monetary Fund (IMF) and ECB — has employed to buy time for the Eurozone’s weaker countries to regain competitiveness and return to growth. Each of these could fail over the next few years, prompting a renewed intensification of the crisis.

Cutting Edge Walk Forward Optimizer with 30+ new superior performance metrics The Power Walk Forward Optimizer (PWFO) is a cutting-edge automatic walk forward testing program that eliminates the ad hoc curve fitting produced by optimization of strategy input values on spurious price movements. This package contains a walk forward optimization add-on program that can be added to any TS or MC strategy using TS or MC multiple strategy option. The PWFO prints out the in-sample performance and the out-of-sample performance results, on one line, for each input variable combination that is run by the TradeStation(TS) optimization module to a user selected spreadsheet comma delimited file.

The Adam Smith Institute Blog Ezra Klein has launched his new site, Vox.com, with an essay on ‘how politics makes us stupid’. The piece is provocative, and Klein uses some interesting examples. Most striking is the study that shows that people’s maths skills get worse when the problem they’re dealing with has a political element and goes against their political instincts. (Klein seems to have slightly misunderstood the study he’s written about, but his basic point stands.) Podcast 36: Being Financially Secure in Today’s Economy, Jane Bryant Quinn Today’s episode of the Consumerism Commentary Podcast features Jany Bryant Quinn, author of Making the Most of Your Money Now: The Classic Bestseller Completely Revised for the New Economy. The book will be released this Tuesday, December 29, 2009 and here is a review. Tom Dziubek, Flexo, and Jane Bryant Quinn discuss the author’s revisions since the book’s last update in 1997 and what everyone should know about being financially secure in today’s economy. Production Number: S02E10 Segment Numbers: 53

Real Time Economics China’s GDP growth fell in the first quarter to its slowest pace since September of 2012, slipping to 7.4% on-year growth from 7.7% the in the fourth quarter. The increase was slightly higher than economists’ expectations of a 7.3% gain. Authorities released other data that suggested continuing weakness, but not at a quickening pace. Industrial production grew 8.8% on year in March below expectations of 9% but up from an average 8.6% expansion in January and February, combined to limit distortions from the Lunar New Year holidays. Retail sales were 12.2% higher on-year in March, up from 11.8% growth in January and February.

The Automated Trader: Walk forward analysis I have completed a walk forward analysis on my system, and tested it on the out-of-sample data from 01-01-2004 until 30-06-2007 (3.5 years). This was previously untouched data that the system has never seen. It can be considered as "tomorrow's data". The results were promising and have validated the robustness of the system. Robert Pardo, in his excellent book, included in my recommended texts, mentions that one method of assessing out-of-sample testing results is by a ratio known as the walk forward efficiency (WFE). WFE is simply the ratio between the objective function score on the out-of-sample testing and the objective function score on the in-sample testing.