Transformational Leadership: How These Leaders Inspire and Motivate 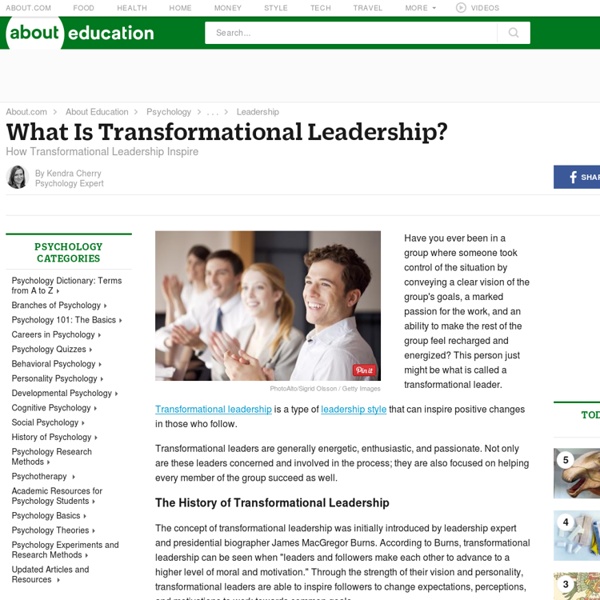 Transformational Leadership School leaders engage in transformative leadership, in which they intentionally become critically aware of their own tacit assumptions and expectations and assess their significance and consequence in decision making. Transformative leaders engage in reflective processes that enable self-evaluation of personal values, beliefs, and experiences, and they intentionally promote the conditions and experiences for transformation in their staff. This includes nurturing the voices of others and building their capacity to take leadership in the school community. A Common Intent to Understand: Boston Pilot School Directors Talk about Diversity examines the ways Pilot Schools talk about diversity in their schools and the impact these discussions have on staffing, professional development, pedagogy, curriculum, and students. We are currently hosting a forum dedicated to questions and discussions about the CES School Benchmarks.

Primary sector of the economy Product’s lifecycle The primary sector of the economy is the sector of an economy making direct use of natural resources. This includes agriculture, forestry, fishing, mining, and extraction of oil and gas. The manufacturing industries that aggregate, pack, package, purify or process the raw materials close to the primary producers are normally considered part of this sector, especially if the raw material is unsuitable for sale or difficult to transport long distances.[1] Primary industry is a larger sector in developing countries; for instance, animal husbandry is more common in Africa than in Japan.[2] Mining in 19th century South Wales is a case study of how an economy can come to rely on one form of business.[3] Canada is unusual among developed countries in the importance of the primary sector, with the logging and oil industries being two of Canada's most important. Agriculture[edit] List of countries by agricultural output[edit] See also[edit] References[edit] Further reading[edit]

9 Tips for Communicating Decisions You Don't Agree With - Insperity A change in business hours, layoffs, a reduction in benefits, a department reorganization, an elimination of bonuses, elimination of casual Fridays: Change in business is as relentless as it is inevitable. While the rationale for such changes may be for the good of the company, sometimes these decisions are unpopular with your employees. And even if you disagree with the changes yourself, often, these decisions aren’t solely up to you. So, you’re left with a daunting task: Communicating a decision to your employees that you don’t personally agree with. How do you communicate a decision to your team when you disagree with it? It’s a tough task, so here are nine steps to communicating business decisions you don’t agree with. 1. Decide the best time and setting to deliver the news. Get with another manager to discuss the questions you’ll expect to receive from employees. Prepare any paperwork you’ll need to hand out, such as a new organizational chart or benefits handbooks. 2. 3. 4. 5. 6. 7.

Mind Tools - Management Training, Leadership Training and Career Training Girls Session: Worth and Identity - Children and Youth Girls’ Session –Worth and Identity Session will look at our Worth and Identity – what shapes and influences us. Session will also look at the issue of self-worth and how we see ourselves. Raft Game Read out the instructions at the top of the exercise sheet.In groups discuss the possibilities of who will be left on the raft.After 10-15 minutes, finalise who you are going to eject from the raft or who will be given surgery. In your group you must agree of each decision. The Raft A ship is wrecked in the middle of the ocean, thousands of miles from land. 15 people are still alive and they manage to make a raft; because of the lack of time and equipment, the raft is only big enough to support 9 survivors. You have to decide which 6 of those listed you have to dispose of, you are not one of the survivors, and no one is allowed to hang onto the raft. A crippled boy, paralysed since birth. Discussion Using Scribble Sheets: How do you decide how much someone is worth? Identity What is identity?

5 Priorities For Transformative Schools 5 Priorities For Transformative Schools This post has been republished from a previous post by Thom Markham Imagine this scenario. The media reports an astounding development: A resolution co-sponsored by the U.S., China, and Finland has been introduced to amend the UN Charter by including the (newly named) Common Core International Standards as the learning goals for the 21st Century. What now? I think that’s a pretty fair question to ask. Here’s a hint, folks: Standards aren’t it. Do students need to know stuff? Once that happens, the real conversation about redesigning education—the dialogue that will determine (and I mean this literally) whether our civilization stands or falls—can begin. You may recall the old bumper sticker: If you don’t like education, try ignorance. 1. Standards focus on the input side of education–what should we, as teachers, deliver today? But the real action today is on output. What if we instead focused, laser-like, on redefining knowledge itself. 2. 3. 4. 5.

6 Leadership Styles, And When You Should Use Them You don’t need an MP3 player, a turntable, or a CD player to listen to Tristan Perich’s new album, Noise Patterns. All you need is a pair of headphones—"not earbuds," says the composer—and a willingness to hear music in noise. The 34-year-old Perich’s compositions push the border between white noise and electronic music, frequently straddling the two as if the static on your old television started emitting a strangely beautiful pattern of sound. But Perich doesn’t just compose music: His music is the instrument itself. He composes sound in code, carefully stringing together each 1 and 0 to transform numbers into a symphony. Perich, who studied math, music, and computer science at Columbia and received a masters from NYU's fabled hacking-meets-art Interactive Telecommunications Program, has spent the last dozen years of his life exploring the frontiers of one-bit sound, transforming those lines of 1s and 0s into a living art form. A recorded excerpt from Noise Patterns

Survival Exercise Scenarios - Description of a Group Dynamics Team Building Exercise Overview - Group Survival Scenario Exercise A classic group communication and decision making exercise, with many variations. Works for a wide variety of ages and purposes, indoors or outdoors. Consensus can be hard to reach, however, set the aim for all participants to at least partially agree to each ranking on their final list. Encourage groups to complete the task without the use of tactics such as voting, trading in or averaging. Scenario Type 1: Choose Survival Equipment Your plane crashed...your group needs to choose the 12 most useful items to survive... Choose / rank equipment items in terms of their relative survival value: Participants choose/rank the items individually Discuss choices/rankings in small group and come to a group consensus Score answers against "expert" opinion Possible scenarios: Lost at sea or island survival (shipwreck) Desert (plane crash) Space or Moon Scenario Type 2: People Survival Scenario (Who will be saved?) Variations

4 Personality Traits That Make You an Effective Leader What makes a good leader? Which personality traits do the best trailblazers share? Every organization has its own benchmarks for determining who would make the best head of its teams, but are those qualities really all that different? Research in the field suggests that, on a broad level, employees and employers are looking for similar characteristics in their leaders -- no matter what business they're in. Here are four personality traits that people want in a boss. Related: 5 Influential CEOs Weigh in What Makes a Good Leader 1. Results form a November 2014 Pew Research Center Survey showed that 84 percent of the 1,835 respondents considered honesty the most essential personality trait for any leader. Honest leaders inspire not just through words but through actions. 2. In the world of personality evaluation, openness is one of the Big Five dimensions of personality that psychologists use to evaluate individuals. Related: The 8 Signs of a Bad Leader 3. Leaders make decisions. 4. Molly Owens

The 9 Traits That Define Great Leadership Many leaders are competent, but few qualify as remarkable. If you want to join the ranks of the best of the best, make sure you embody all these qualities all the time. It isn't easy, but the rewards can be truly phenomenal. 1. 2. 3. 4. 5. 6. 7. 8. 9. Like this post? Three Elements of Great Communication, According to Aristotle - Scott Edinger by Scott Edinger | 9:00 AM January 17, 2013 In my nearly 20 years of work in organization development, I’ve never heard anyone say that a leader communicated too much or too well. On the contrary, the most common improvement suggestion I’ve seen offered up on the thousands of 360 evaluations I’ve reviewed over the years is that it would be better if the subject in question learned to communicate more effectively. What makes someone a good communicator? Ethos is essentially your credibility — that is, the reason people should believe what you’re saying. Pathos is making an emotional connection — essentially, the reason people believe that what you’re saying will matter to them. But all the authority and empathy in the world won’t really help you if people don’t understand what you’re talking about or how you came to your conclusions. These three elements of communication reinforce one another.