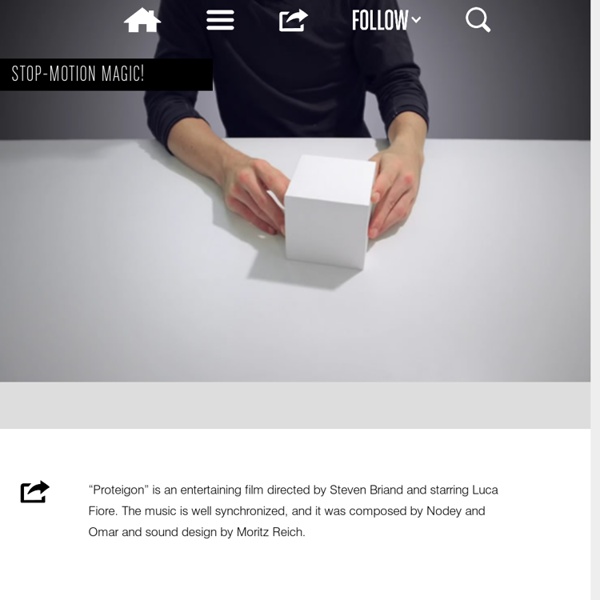 “Proteigon” is an entertaining film directed by Steven Briand and starring Luca Fiore. The music is well synchronized, and it was composed by Nodey and Omar and sound design by Moritz Reich. Film stills © Steven Briand Link via Colossal

Games « you found me. I make alternate reality games: games that are designed to improve real lives or solve real problems. I’ve been making ARGs since 2001 — and you can watch trailers for a dozen of my favorite ARGs below. Many of my games challenge players to tackle real-world problems at a planetary-scale: hunger, poverty, climate change, or global peace, for example (see: EVOKE, World Without Oil, Superstruct). Others are simply designed to make players happier in their everyday lives — by dancing more, say, or by being kind to strangers (see: Top Secret Dance Off and Cruel 2 B Kind). 100+ awesome free and open source applications - Software - Seopher.com Posted on Tuesday 27th of September 2011 at 13:05 in SoftwareIt has always amazed me quite how many incredible, varied and useful applications are available for free on the Internet. Be it free, open source, web-based or merely passive trials - the number of top quality items on offer is huge. The purpose of this list is to help people realise that the free and open source software communities are expansive and generous. In these tense economic times, raising awareness of such projects is something I'm more than happy to do. If you feel that I've missed something good off the list, please leave a comment at the bottom - I read absolutely every one.

John Conway's Game of Life The Game The Game of Life is not your typical computer game. It is a 'cellular automaton', and was invented by Cambridge mathematician John Conway. This game became widely known when it was mentioned in an article published by Scientific American in 1970. It consists of a collection of cells which, based on a few mathematical rules, can live, die or multiply. Slingshot Instructions: (after you've read these, click here to get a bigger picture.) Click and drag the arrow to change the direction of launch of the spaceship. Choose Jupiter's path distance (the shortest distance of the initial launch point from Jupiter's orbital path) and initial speed of the spaceship. RESET: puts Jupiter into ready position at far left START: Jupiter begins moving at its orbital speed

100 Very Cool Facts About The Human Body The Brain The human brain is the most complex and least understood part of the human anatomy. There may be a lot we don’t know, but here are a few interesting facts that we’ve got covered. 101 Nintendo T-Shirts For The Ultimate Nintendo Gamer To say that the Nintendo Entertainment System was a part of my childhood is quite an understatement. The original NES was in fact a big part of my childhood. I recall countless hours playing Super Mario Bros., Mike Tyson’s Punch-Out!! .htaccess Tutorial Introduction In this tutorial you will find out about the .htaccess file and the power it has to improve your website. Although .htaccess is only a file, it can change settings on the servers and allow you to do many different things, the most popular being able to have your own custom 404 error pages. .htaccess isn't difficult to use and is really just made up of a few simple instructions in a text file. Will My Host Support It? This is probably the hardest question to give a simple answer to. Many hosts support .htaccess but don't actually publicise it and many other hosts have the capability but do not allow their users to have a .htaccess file.

Tired of Numbers by Mac Funamizu & Yanko Design Mac Funamizu names his newest project a little well, calling the desktop hygrometer and thermometer “Tired of Numbers.” Yanko Design is, incase you were unaware, primarily a blog about design concepts. Project after project, time after time, Mac Funamizu defines the Yanko motto: “Form Beyond Function.” And I mean that in as positive a manner as possible! Some Bizzare and Odd things around us... Beauty of the nature lies in viewer’s eyes. A photograph is just a way to show or represent that beauty. Here is a bunch of some wonderful pictures which are not only the example of beautiful photography but are also a photograph of some miracles happening in the world. You can also call it the creativity and innovation of photographer’s mind. I think it was at the peak while taking these pictures. Some photographs are just the example of wonder created by God.

Intelligent YouTube Channels Below, we have gathered together some of the most intelligent video collections on YouTube. A great place to find culturally enriching video... General Universities Spotlighted Collections Sintel: 3D art technology - 3D Graphics Now, it is the Year of Dragon. Traditionally, it is an important and successful year, the year of battles and victories. Previous 2011 passed as the typical one. During past year were done a lot of good things, such as the new patents, variety of products and continuous development of technology. However, this article will be about something else. The story will be about a girl by a name Sintel and the dragon from the short film Sintel, released by Blender Foundation more than a year ago.

Advertisements from 40s to 80s Advertising changed a lot over time. Here is a selection of advertisements from the 40s to the 80s. Share Great Resume Designs that Catch Attention–and Got People Hired Inspiration June 21, 2011 When applying for a job, you have no choice but to do your best to outshine competition. Even before winning an interview, your qualifications (or in some instance, your character) are already judged by the resume you’ve submitted.