Why programmers work at night 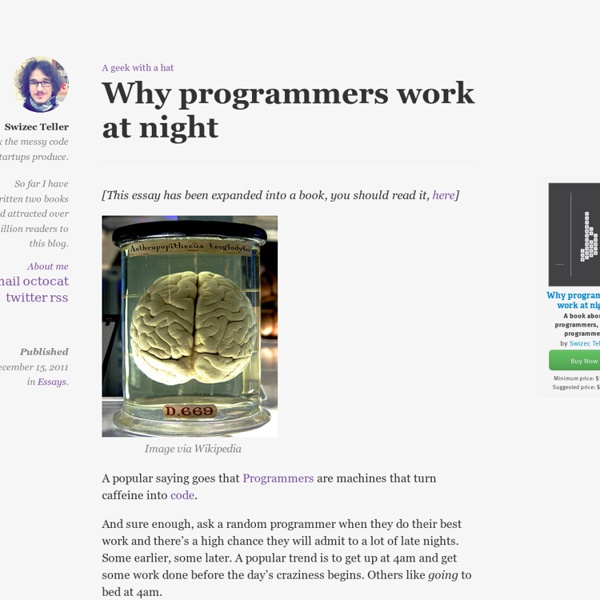 [This essay has been expanded into a book, you should read it, here] Image via Wikipedia A popular saying goes that Programmers are machines that turn caffeine into code. And sure enough, ask a random programmer when they do their best work and there’s a high chance they will admit to a lot of late nights. Some earlier, some later. At the gist of all this is avoiding distractions. I think it boils down to three things: the maker’s schedule, the sleepy brain and bright computer screens. The maker’s schedule Paul Graham wrote about the maker’s schedule in 2009 – basically that there are two types of schedules in this world (primarily?). On the other hand you have something PG calls the maker’s schedule – a schedule for those of us who produce stuff. This is why programmers are so annoyed when you distract them. Because of this huge mental investment, we simply can’t start working until we can expect a couple of hours without being distracted. The sleepy brain Bright computer screens Fin Fin

Metcalfe's law Two telephones can make only one connection, five can make 10 connections, and twelve can make 66 connections. Metcalfe's law states that the value of a telecommunications network is proportional to the square of the number of connected users of the system (n2). First formulated in this form by George Gilder in 1993,[1] and attributed to Robert Metcalfe in regard to Ethernet, Metcalfe's law was originally presented, circa 1980, not in terms of users, but rather of "compatible communicating devices" (for example, fax machines, telephones, etc.)[2] Only more recently with the launch of the Internet did this law carry over to users and networks as its original intent was to describe Ethernet purchases and connections.[3] The law is also very much related to economics and business management, especially with competitive companies looking to merge with one another. Network effects[edit] Limitations[edit] Business practicalities[edit] Modified models[edit] See also[edit] References[edit]

To all those who got SC2 for Christmas: : starcraft Anatomy of Facebook 8 Ways To Forget Your Troubles | Streams of Consciousness Ad on a London Bus. Courtesy of Annie Wade via Flickr. People have long tried tricks to aid their memories. One of the most useful of these so-called mnemonic devices, I’ve found, involves associating names with word pictures or with other people you know well. Perhaps my favorite mnemonic was one my daughter brought home in kindergarten. As much time and attention as has been paid to helping people remember stuff, however, I’ve never seen a list of tactics for helping people forget. Courtesy of lett-/\= via Flickr. I am not sure what to call these forgetting tactics. The prefrontal cortex of the human brain includes two major sections. 1. 2. Courtesy of Calsidyrose via Flickr. 3. 4. 5. Courtesy of Sterlic via Flickr. 6. 7. Courtesy of willfc via Flickr. 8. More to Explore » Memory in the Brain [Interactive] » Trying to Forget

Project Euler Josh's Intervention Mozilla may make Flash click-to-play by default in future Firefox Firefox developers are considering making Web plugins like Adobe Flash an opt-in feature. Although there is still a long way to go before it’s ready for Firefox proper, switching to an opt-in, "click-to-play" approach for plugins could help make Firefox faster, more secure, and a bit easier on the laptop battery. A very early version of the "click-to-play" option for plugins is now available in the Firefox nightly channel. Once that’s installed you’ll need to type about:config in your URL bar and then search for and enable the plugins.click_to_play flag. Once that’s done, visit a page with Flash content and it won’t load until you click on it. While HTML5 reduces the need for Flash and other plugins, they’re still a big part of the Web today. Another popular solution is the click-to-play approach that Mozilla developers are considering. Whether or not the click-to-play approach that Mozilla is considering will ever become the default behavior for Firefox remains to be seen.

a little old man came into my store today... [UPDATE] : gaming Things You Should Never Do, Part I by Joel Spolsky Thursday, April 06, 2000 Netscape 6.0 is finally going into its first public beta. There never was a version 5.0. The last major release, version 4.0, was released almost three years ago. Three years is an awfully long time in the Internet world. It's a bit smarmy of me to criticize them for waiting so long between releases. Well, yes. They decided to rewrite the code from scratch. Netscape wasn't the first company to make this mistake. We're programmers. There's a subtle reason that programmers always want to throw away the code and start over. It’s harder to read code than to write it. This is why code reuse is so hard. As a corollary of this axiom, you can ask almost any programmer today about the code they are working on. Why is it a mess? "Well," they say, "look at this function. The idea that new code is better than old is patently absurd. Back to that two page function. Each of these bugs took weeks of real-world usage before they were found. Is there an alternative?

Wall of Films! | Films For Action Just imagine what could become possible if an entire city had seen just one of the documentaries above. Just imagine what would be possible if everyone in the country was aware of how unhealthy the mainstream media was for our future and started turning to independent sources in droves. Creating a better world really does start with an informed citizenry, and there's lots of subject matter to cover. From all the documentaries above, it's evident that our society needs a new story to belong to. The old story of empire and dominion over the earth has to be looked at in the full light of day - all of our ambient cultural stories and values that we take for granted and which remain invisible must become visible. But most of all, we need to see the promise of the alternatives - we need to be able to imagine new exciting ways that people could live, better than anything that the old paradigm could ever dream of providing. So take this library of films and use it.