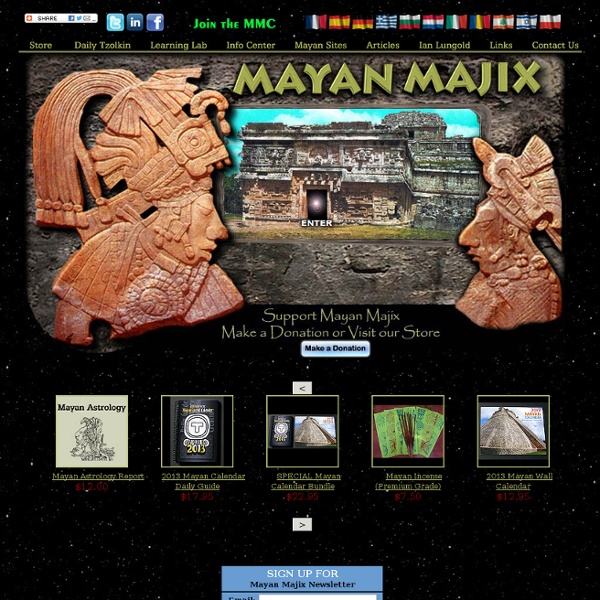 The Mayan Calendar - The World Will Not End Steep Uphill Climb to 2012: Messages from the Mayan Milieu ©- Copyright 2002 by Steven McFadden In early Autumn 2002, Carlos Barrios journeyed North from his home in Guatemala to the Eastern edge of the Four Corners. In Santa Fe, NM, at the tail of the Rocky Mountain spine, Mr. Barrios spoke in a knowledgeable manner about the Mayan tradition and the fabled Mayan calendars. The Mayan calendars are an object of intense interest for many thousands of people right now, because they focus upon the watershed date of Dec. 21, 2012. Everything changes by then, it is said. With a cultural heritage including thousands of pyramids and temples, and a calendar that has proven itself to be astronomically accurate over millions of years, the Maya tradition is widely considered to be a mystic key to the soul of Turtle Island (North America).

Night Signature (Classical) : Yin/Male Aspect The first mayan calendar that I discovered was Tortuga's 'Dreamspell' calendar. I and my friends were continually blown away by how well this calendar 'worked'! Our Galactic Signatures were bang on, our Wavespells were always intense and significant, our 13-year cycles oh-so accurate, our 4 revolving Theme Years very telling and true. Dogon Nommos, Sirius Amphibious Gods Robert Temple The Washington Post The Sirius Mystery The Dogon are an ethnic group located mainly in the administrative districts of Bandiagara and Douentza in Mali, West Africa. The precise origin of the Dogon, like those of many other ancient cultures, is undetermined.

Maya mythology Maya mythology is part of Mesoamerican mythology and comprises all of the Maya tales in which personified forces of nature, deities, and the heroes interacting with these play the main roles. Other parts of Maya oral tradition (such as animal tales and many moralising stories) do not properly belong to the domain of mythology, but rather to legend and folk tale. Sources[edit] Mayankin: Tzolkin Tutorial Tzolkin, meaning the ‘Count of Days’ in Yucatecan, is the Sacred Mayan Calendar that was utilized by Mayan priests for ceremonies, rituals and divination purposes. This sacred calendar was followed by several Mesoamerican cultures and, although expressed with different names, they all consisted of a combination of 20 symbols by 13 numbers. The Cholq’ij, its name in Quiche, is still in use by the Day Keepers in Mayan communities of Highland Guatemala.

Dogon Nommos, Sirius Amphibious Gods Robert Temple The Washington Post The Sirius Mystery The Relationship Between The Great Pyramid and the Book of the D The Relationship Between The Great Pyramid and The Book of the Dead Mars - Myth - Metaphysics (Build 20100722155716) Mars Mythology and Metaphysics Mars was the God of war in Roman Mythology. The Son of Juno, he was the father of Romulus (Rome's founder). His earliest form was a god of the spring and agriculture, responsible for vegetation, fertility and cattle. His major festival was the Quinquartrus, five days of celebrations during the spring equinox, in both his and Minerva's honor. Mars soon evolved into a god of war, with many of his agricultural duties turned over to Ceres and Liber, although every May 29th festivals of the Ambarvalia celebrated him as an agricultural god, with a pig, ram and bull sacrificed to him.

Ancient Connections Between Egypt and Ireland Confirmed! Vatic Note: This fits in with the blog just previous to this one. This one got caught up in the deleted ones, or even when up, I could not get the summaries out that day, so its here again, simply because we are in the middle of a rabbit hole that this may be related to? We don't know, but it seem to fit here nicely. Its definitely another change of pace. Funny how you go down a rabbit hole and find a slew of rabbits, huh? lol This is another one I found while doing the work on Pegasus and the Antarctic, as well as the work we did on the Brits and their connection to the ME.

Musings from the Chiefio 10 Commandments Movie Poster with Yul Brynner Original Image It just wouldn’t have been the same with a Redhead like, oh, Conan O’Brien playing the Pharaoh… but might have been more authentic. OK, I’m finding this out a bit late. Most of the articles have a date stamp of a year ago, some even older. So if you already know this, please forgive… but I didn’t know it… so it’s all new to me, and a bit “odd”… History of ancient Egypt The history of Ancient Egypt spans the period from the early predynastic settlements of the northern Nile Valley to the Roman conquest in 30 BC. The Pharaonic Period is dated from around 3200 BC, when Lower and Upper Egypt became a unified state, until the country fell under Greek rule in 332 BC. Chronology[edit] Note For alternative 'revisions' to the chronology of Egypt, see Egyptian chronology. Egypt's history is split into several different periods according to the ruling dynasty of each pharaoh.

Redheaded Pharaoh Ramesses II Pharaoh Ramesses II (of the 19th Dynasty), is generally considered to be the most powerful and influential King that ever reigned in Egypt. He is one of the few rulers who has earned the epithet "the Great". Subsequently, his racial origins are of extreme interest. In 1975, the Egyptian government allowed the French to take Ramesses' mummy to Paris for conservation work. Numerous other tests were performed, to determine Ramesses' precise racial affinities, largely because the Senegalese scholar Cheikh Anta Diop, was claiming at the time that Ramesses was black.