CONFIRMED: The Trillion-Dollar Lawsuit That Could End Financial Tyranny 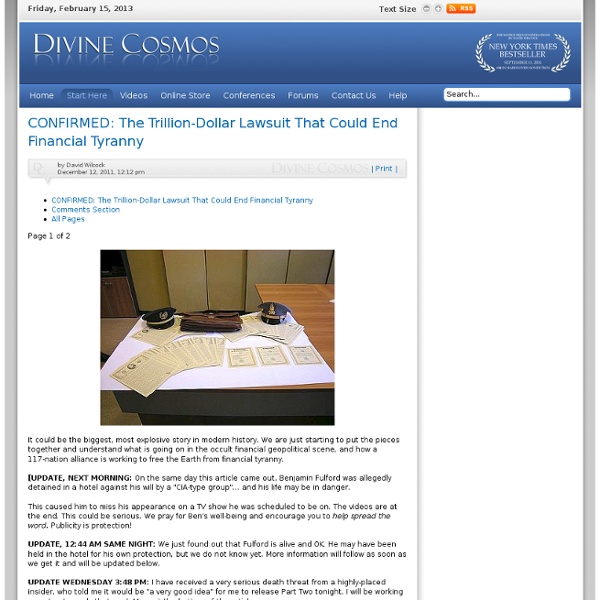 Mayan Majix - Articles - The Bankruptcy of The United States The Bankruptcy of The Congressional Record, Vol. 33, page H-1303 Speaker-Rep. James Traficant, Jr. () addressing the House: "Mr. Speaker, we are here now in chapter 11.. Members of Congress are official trustees presiding over the greatest reorganization of any Bankrupt entity in world history, the U.S. It is an established fact that the United States Federal Government has been dissolved by the Emergency Banking Act, March 9, 1933, 48 Stat. 1, Public Law 89-719; declared by President Roosevelt, being bankrupt and insolvent. The receivers of the United States Bankruptcy are the International Bankers, via the United Nations, the World Bank and the International Monetary Fund. Gold and silver were such a powerful money during the founding of the , that the founding fathers declared that only gold or silver coins can be "money" in . It is essential that we comprehend the distinction between real money and paper money substitute. Their lust is for power and control.

Water crystal replication study Radin, D., Lund, N., Emoto, M., Kizu, T. (2008). Effects of distant intention on water crystal formation: A triple-blind replication. Journal of Scientific Exploration, 22(4), 481-493. An experiment tested the hypothesis that water exposed to distant intentions affects the aesthetic rating of ice crystals formed from that water. Ice drops formed from samples of water in the different treatment conditions were photographed by a technician, each image was assessed for aesthetic beauty by over 2,500 independent judges, and the resulting data were analyzed, all by individuals blind with respect to the underlying treatment conditions. Results suggested that crystal images in the intentionally treated condition were rated as aesthetically more beautiful than proximal control crystals (p = 0.03, one-tailed). (I'm afraid I don't have paper reprints or e-prints of this yet, so I can't send anyone a copy of the full paper.)

AMERICAN KABUKI Cabal struggles desperately to create fascist world government as multiple criminal investigations zero in on them The fascist cabal known as the Bilderbergers, CFR, committee of 300 etc., is desperately and without hope trying to start WW3 and install a fascist world government in an attempt to pre-empt criminal investigations closing in on them from all sides. Their efforts will fail because the Pentagon and the agencies in the US (with the exception of homeland Gestapo) are preparing to remove them from power, according to CIA and other sources. For example, multiple investigations are closing in on alleged President Obama, including one for illegally declaring war on Libya. A count among US representatives show the votes necessary to impeach him are there, US law enforcement officials say. In addition, evidence of bribery and other forms of illegally tampering with government is being compiled against George Soros, among others.

Internet Sacred Text Archive Home The US Senate and Obama claiming the right to murder and imprison Americans without trial was a fatal mistake The word is that the Pentagon, the agencies and the militias are on the brink of taking violent action against President Obama and the Senators who claimed the right to kill and/or indefinitely imprison Americans without trial. The criminal cabal in Washington D.C. and Wall Street may be able to pretend they are setting up a fascist/totalitarian dictatorship in the US for a while longer but no serious armed group is going to support them. The same is true in Europe were Freemason P2 lodgers and Bilderbergers will make a move towards fascist control this week and will seem to be on the offensive but will ultimately fail. The simple fact of the matter is that these fascists simply do not have any reality to back up the numbers they are putting into their financial computers to bribe people and hire bully boys.

Weekly geo-political news and analysis Israel | A Jewish Defector Warns America: Benjamin Freedman speaks A Jewish Defector Warns America: Benjamin Freedman Speaks on Zionism This should do it! For the second and last time we are updating the transcript of Ben Freedman's 1961 speech at the Willard Hotel. The piece has been posted for over a year now. There had also been some simple rearrangements of sentence structure in that transcript, and a line or two omitted in places. The original transcriber had 'tidied up' Mr. Here is our first update notice, about a year ago: The original posting of this speech was taken from an existing web site. The Truth will stand on its own merit A Jewish Defector Warns America: Benjamin Freedman Speaks by Benjamin H. Introductory Note -- Benjamin H. Mr. Mr. This speech was given before a patriotic audience in 1961 at the Willard Hotel in Washington, D.C., on behalf of Conde McGinley's patriotic newspaper of that time, Common Sense. Ladies and gentlemen, you are about to hear a very frightening speech. (applause) [Freedman's speech] And what is the reason?

Futility, or the Wreck of the Titan Futility, or the Wreck of the Titan is an 1898 novella written by Morgan Robertson. The story features the ocean liner Titan, which sinks in the North Atlantic after striking an iceberg. The Titan and its sinking have been noted to be very similar to the real-life passenger ship RMS Titanic, which sank fourteen years later. Following the wreck the novel was reissued with some changes, particularly in the ship's gross tonnage.[1] Plot[edit] The first half of Futility introduces the hero, John Rowland. Similarities to the Titanic[edit] Although the novel was written before the Olympic-class Titanic was even designed, there are some uncanny similarities between both the fictional and real-life versions. Beyond the name, the similarities between the Titanic and the fictional Titan include:[4] Popular culture[edit] In audio plays[edit] In games[edit] Akane Kurashiki (a.k.a. In print[edit] In television[edit] See also[edit] References[edit] Bibliography[edit] Cocksey, Brian. External links[edit]

D-Dot Deric Michael Angelettie (born July 31, 1968), better known by his stage names D-Dot, The Mad Rapper and Papa Dot, is an American music producer, songwriter, artist, manager, entertainment executive and entrepreneur from Brooklyn, New York City. He is a three-time Grammy Nominee and NARAS Award winner for "Producer of The Year" in 1998. D-Dot began his career in 1990 as a rapper in the group Two Kings in a Cipher. He created the character, Mad Rapper, ((who made his debut on Notorious B.I.G.' D-Dot and his Crazy Cat record label will be releasing three projects commercially in 2013, with the first being Mad Rapper's sophomore LP, "Still Mad" in Summer 2013. Biography[edit] The early years[edit] Born and raised an only child in Brooklyn, New York in 1968 to an African-American father Eric Angelettie and a Puerto-Rican mother Dr. While attending Howard University from 1986-1989, Angelettie and his friend Ron "Amen-Ra" Lawrence formed the conscious rap duo Two Kings in a Cipher. 1997[edit]