‎Microsoft PowerPoint on the App Store 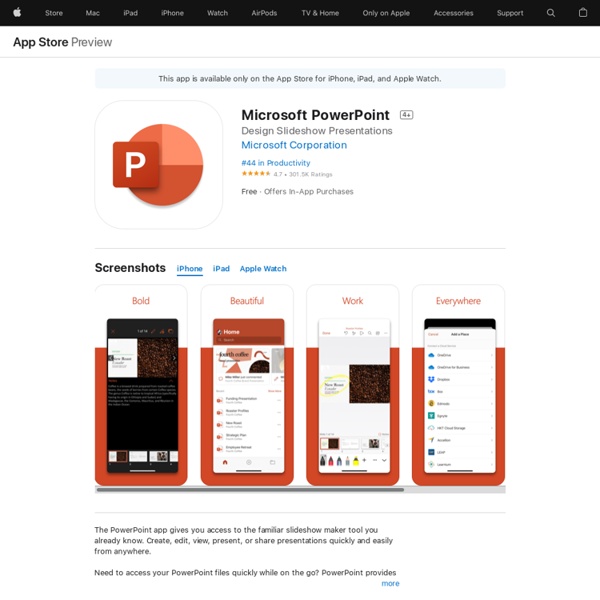 The PowerPoint app gives you access to the familiar slideshow maker tool you already know. Create, edit, view, present, or share presentations quickly and easily from anywhere. Need to access your PowerPoint files quickly while on the go? PowerPoint provides a quick view of your recent slides and presentations for easy access on any device. Worried about multiple file versions when you work on PowerPoint mobile? Syncing is seamless across devices via OneDrive. PowerPoint lets you make a lasting impression with powerful and customizable slides and presentations that make you stand out. Making a delightful and impactful presentation has never been easier. Master your presentation with Presenter Coach, a new AI tool designed to help with public speaking. Customize your presentations on the go, collaborating with others in real time. Get the complete Microsoft Office experience when you sign in with your Microsoft 365 subscription.

YouTube - Apps on Google Play Get the official YouTube app for Android phones and tablets. See what the world is watching -- from the hottest music videos to what’s trending in gaming, entertainment, news, and more. Subscribe to channels you love, share with friends, and watch on any device. Microsoft Word Word processor developed by Microsoft Microsoft Word is a word processor developed by Microsoft. It was first released on October 25, 1983[7] under the name Multi-Tool Word for Xenix systems.[8][9][10] Subsequent versions were later written for several other platforms including IBM PCs running DOS (1983), Apple Macintosh running the Classic Mac OS (1985), AT&T UNIX PC (1985), Atari ST (1988), OS/2 (1989), Microsoft Windows (1989), SCO Unix (1994), and macOS (formerly OS X; 2001). Commercial versions of Word are licensed as a standalone product or as a component of Microsoft Office, Windows RT or the discontinued Microsoft Works suite. History[edit] Origins[edit]

YouTube - Apps on Google Play Get the official YouTube app for Android phones and tablets. See what the world is watching -- from the hottest music videos to what’s trending in gaming, entertainment, news, and more. Subscribe to channels you love, share with friends, and watch on any device. With a new design, you can have fun exploring videos you love more easily and quickly than before. Just tap an icon or swipe to switch between recommended videos, your subscriptions, or your account. Microsoft Excel: View, Edit, & Create Spreadsheets - Apps on Google Play The Excel spreadsheet app lets you create, view, edit, and share your files with others quickly and easily. Create spreadsheets, data analyses, charts, budgets and more while you view and edit workbooks attached to email messages. Edit documents for data analysis, accounting, finance, or any other fields with confidence. When on the go, your data and office move with you.

‎ZOOM Cloud Meetings on the App Store Stay connected wherever you go – start or join a secure meeting with flawless video and audio, instant screen sharing, and cross-platform instant messaging - for free! Zoom is #1 in customer satisfaction and the best unified communication experience on mobile. It's super easy! Install the free Zoom app, click on "New Meeting," and invite up to 100 people to join you on video! Connect with anyone on iPad, iPhone, other mobile devices, Windows, Mac, Zoom Rooms, H.323/SIP room systems, and telephones.

‎Adobe Photoshop on the App Store Ready to use Photoshop on the iPad? If you have a qualifying membership, just log in with your Adobe ID. If you don’t, try it with a 30-day free trial. Twitter - Apps on Google Play Join the conversation! Twitter is your go-to social media app and the source for what's happening in the world. Tweets cover trending topics from world news to local news, celebrity gossip to sports and gaming, politics to fun stories that go viral, if it happens in the world, it is trending now on Twitter. Find friends, share your opinion, gain followers or follow influential people - every voice can impact the world! Join over 2 BILLION users worldwide! ‎OneDrive on the Mac App Store Start with 5 GB of free cloud storage or upgrade to a Microsoft 365 subscription to get 1 TB of storage. Microsoft 365 includes premium Office apps, 1 TB cloud storage in OneDrive, advanced security, and more, all in one convenient subscription. With Microsoft 365, you get features as soon as they are released ensuring you’re always working with the latest. Microsoft OneDrive keeps your files and photos backed up, protected, synced, and accessible on your Mac and across all your other devices.

Facebook - Apps on Google Play Keeping up with friends is faster and easier than ever. Share updates and photos, engage with friends and Pages, and stay connected to communities important to you. Features on the Facebook app include: * Connect with friends and family and meet new people on your social media network* Set status updates & use Facebook emoji to help relay what’s going on in your world* Share photos, videos, and your favorite memories.* Get notifications when friends like and comment on your posts* Find local social events, and make plans to meet up with friends* Play games with any of your Facebook friends* Backup photos by saving them in albums* Follow your favorite artists, websites, and companies to get their latest news* Look up local businesses to see reviews, operation hours, and pictures* Buy and sell locally on Facebook Marketplace* Watch live videos on the go The Facebook app does more than help you stay connected with your friends and interests.

Extension:eduWIKI I am moving eduWIKI from Google Code to my own repository. eduWIKI is an educational-based wiki based off of MediaWiki. It is a MediaWiki modification for education. eduWIKI exists in two forms: Standalone installation (eduWIKI), and as a MediaWiki extension (edupak), however, edupak has been deprecated. Both are on Google Code.