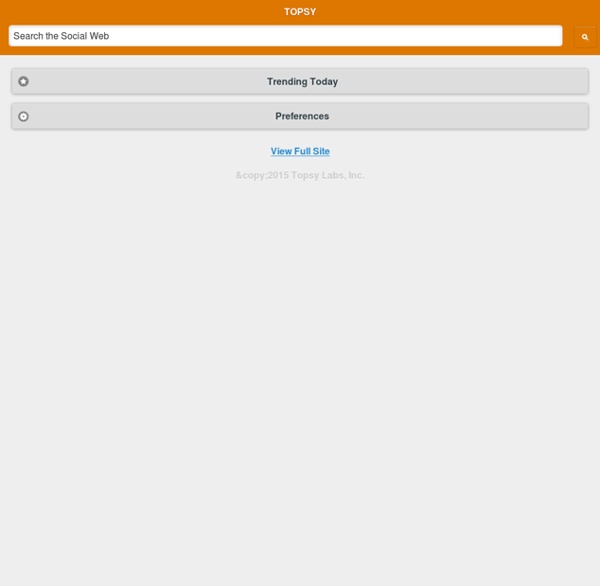 3 Inexpensive or Even Free Ways to Forge Your Business Web Presence An expert in the field of creating "virtual storefronts" estimates that as many as half of all businesses that have been around for more than 15 years are invisible online. For years, places such as local pizza parlors, auto repair shops and plumbers have survived without Internet identities. Related: 14 Amazingly Free Stock Photo Websites “There’s no hard data on it since it’s impossible to really count who’s not online,” said Jeff Lerner, founder of Xurli.

11 Google Tricks That Will Change the Way You Search Google Search’s learning curve is an odd one. You use it every day, but still all you know is how to search. But the search engine has plenty of tricks up its sleeve. Here’s an overview of some of the most useful Google search tricks, from basic tips to new features just recently released. 1. Use quotes to search for an exact phrase.

Data Source Handbook  This slim book is exactly what the title implies, it is a book about the various open APIs for modern websites with some information about how to use those APIs when you are programming mashups or other sites which can use them. Overall, the book is densely packed with good information. I would always suggest following up with the links listed to ensure the APIs and their uses are still consistent with what is listed in the book, but I haven't found any errors yet. The curiosity for me with this book is why it is in print form.

Use These 24 Tools to Run Your Business From Anywhere in the World Join Entrepreneur and today's most influential business innovators in Denver, May 4. Register Now » Nearly a quarter, 23 percent, of Americans worked from home in 2014, according to a recent Bureau of Labor Statistics survey. Data Analysis and Visualization: The 15M Movement and Other Case Studies Present: Javier Toret, Pablo Aragón and Oscar Marín, members of the group Datanalysis15M. The research group #datanalysis15m was created to analyse the new movements that emerged in 2011: Arab Spring, Spanish Indignants, Occupy, etc. The main questions being: How can we measure augmented events? How can we measure new ways of organization, of communication, of engagement? How do ideas spread (virally)?

Choose the Vimeo membership that’s right for you. Why would I pay for video hosting, when I can get it for nothing? A free Basic membership on Vimeo is pretty great, but if you want priority support, tons more storage, advanced privacy control, and other professional tools, Vimeo Plus, PRO and PRO Unlimited are for you. And unlike YouTube, we never put ads before, on top of, or after your videos. Will viewers see third-party ads on my videos? Absolutely not. Infographic Of The Day: The Many Languages Of Twitter In the physical world, we tend to identify ourselves by nationality. But online, where you can reach across cyberspace and speak directly and instantaneously with someone 6,000 miles away without ever passing through customs, nationality isn’t nearly as meaningful. The real borders are created by language: Language is what makes someone addressable no matter where he is. Language is what you share with strangers above all else. Language is your passport into a new community of people. Ergo, you can use language to map cultural barriers that transcend political boundaries.

15 Octubre 2011: Mapas de la Revolucion Global en Twitter by Oscar Marín Miró, Alejandro González, Roberto Maestre, Marco Martínez, Ruben Abad and Leonardo Menezes #15oct and #ows 15th October 2011 was a world-level milestone day: Millions of people aroud the globe occupied the streets to protest against global financial crisis, influenced in a great measure by the power of social networks, essentially Twitter. The protest movement, tagged as #15o and #15oct was heavily based upon #15m (Spain) and #ows (“Occupy Wall Street”), social movements around the notion that 99% of the people is NOT responsible of the ‘financial games’ played by a minor 1% that get rich in the process of sucking their wealth from the remaining 99% (#weare99)