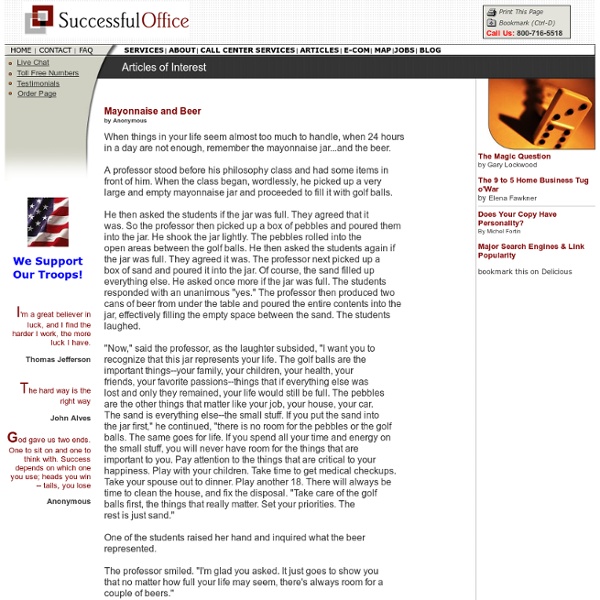 When things in your life seem almost too much to handle, when 24 hours in a day are not enough, remember the mayonnaise jar...and the beer. A professor stood before his philosophy class and had some items in front of him. large and empty mayonnaise jar and proceeded to fill it with golf balls. He then asked the students if the jar was full. was. into the jar. open areas between the golf balls. the jar was full. box of sand and poured it into the jar. everything else. responded with an unanimous "yes." cans of beer from under the table and poured the entire contents into the jar, effectively filling the empty space between the sand. laughed. "Now," said the professor, as the laughter subsided, "I want you to recognize that this jar represents your life. important things--your family, your children, your health, your friends, your favorite passions--things that if everything else was lost and only they remained, your life would still be full. The sand is everything else--the small stuff. balls.

Next stop Barking: The giant dog that&#039;s become a hit on Lon By Daily Mail Reporter Updated: 16:05 GMT, 5 March 2009 A canine commuter has become a minor celebrity on the London Underground thanks to his giant frame. Rufus the Pyrenean mountain dog travels on the capital's transport network with his owner Michael Stavrides and has won the hearts of fellow commuters. Stavrides, 50, takes the tube journey from Pinner to Baker Street daily with his oversized pal and says that the reaction to the five-year-old dog has been overwhelmingly positive. Enlarge Canine commuter: Rufus the Pyrenean mountain dog on the tube with his owner Michael Stavrides 'It's amazing the reaction of people as I take Rufus on the train. 'Although he does tend to slump across the carriage floor people absolutely love him,' says Michael, who owns the Fine Art Gallery in Marylebone. 'People actually tell me they get on the train that isn't their train just to go to the next stop with him. 'They tell me it makes their day, particularly as we're going through a credit crunch.'

The 10 Best Sandwiches in America » Gear Patrol | Men’s Lifestyl By Jesse Zanger - It’s almost impossible to compile a list of the 10 best sandwiches in America. That said, the editors of Gear Patrol put me out to do just that. Honestly, it’s like asking for a definitive list of the 10 most beautiful women ever with 50 of them standing there in front of you. First things first, lets settle on the definition of a sandwich. Main Entry: (noun) Two or more slices of bread or a split roll having a filling in between.Etymology: John Montagu, 4th Earl of Sandwich died 1792 English diplomat. With that out of the way, let’s proceed. 9. Hot Truck – Ithaca, New York – Ithaca is known for many things: Home of Cornell. 8. Acme – 724 Iberville Street, New Orleans, Louisiana – Once, during a drunken bachelor party in New Orleans, my friends and I made a point of reeling to the much-lauded Acme Oyster House. 7. 6. Shawarma at Bereket – 187 Orchard Street, New York, New York – There are a million lousy places to eat shawarma.

Cobain&#039;s suicide note To Boddah: Speaking from the tongue of an experienced simpleton who obviously would rather be an emasculated, infantile complain-ee. This note should be pretty easy to understand. All the warnings from the punk rock 101 courses over the years, since my first introduction to the, shall we say, ethics involved with independence and the embracement of your community had proven to be very true. For example, when we're backstage and the lights go out and the manic roar of the crowds begin, it doesn't affect me the way in which it did for Freddie Mercury, who seemed to love, relish in the love and adoration from the crowd which is something I totally admire and envy. Sometimes I feel as if I should have a punch-in time clock before I walk out on stage. On our last 3 tours, I've had a much better appreciation for all the people I've known personally, and as fans of our music, but I still can't get over the frustration, the guilt and empathy I have for everyone. Peace, love, empathy, Kurt Cobain