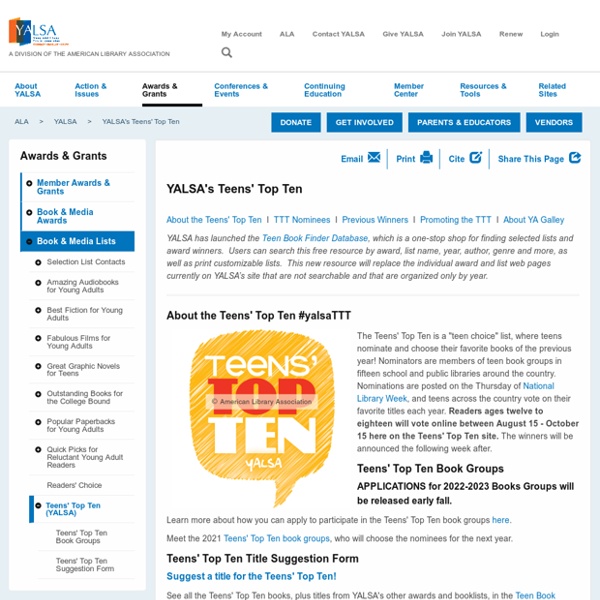 YALSA Book and Media Awards for Libraries | Young Adult Library Services Association (YALSA) *YALSA has launched the new Teen Book Finder Database, which is a one-stop shop for finding selected lists and award winners. Users can search this free resource by award, list name, year, author, genre and more, as well as print customizable lists. This new resource will replace the individual award and list web pages currently on YALSA’s site that are not searchable and that are organized only by year. Awards & Seals | Selected Lists I Teen Book Finder app & database I Committee Contacts | Additional Resources While these books and media have been selected for teens from 12 to 18 years of age, the award-winning titles and the titles on YALSA's selected lists span a broad range of reading and maturity levels. Book Awards & Seals Learn more about each award below and read speeches from winners. Purchase seals for award winners, honor books, and nominees. Selected Book & Media Lists Learn more about YALSA's Book and Media Lists, including: View Past Lists (that are currently inactive)

Successful Summer Reading Program Second grade teachers getting ready to read to a crowd of children during the Summer Reading Program. I don’t know about you, but every April, I feel a huge weight on my shoulders as the school librarian to figure out an effective way to motivate children to read every day throughout the summer months. Children, teachers, and parents work so hard during the school year to improve reading stamina, and it is troubling to see what the Summer Slide can do to this progress. Well, last summer, Colchester Elementary School completely changed their reading program, and it was a huge success reaping high attendance rates. Six Steps to Run a Popular Summer Reading Program Step 1: Secure a room at the local library for a weekly storytime at 6:00: The evening hours made it easier for working families to attend the program. Step 2: Ask teachers to volunteer to read: Teachers and administrators signed up to read with a partner at one of the events. Author: Maureen Schlosser

Popular Paperbacks for Young Adults *YALSA has launched the new Teen Book Finder Database, which is a one-stop shop for finding selected lists and award winners. Users can search this free resource by award, list name, year, author, genre and more, as well as print customizable lists. This new resource will replace the individual award and list web pages currently on YALSA’s site that are not searchable and that are organized only by year. Each year, the Popular Paperbacks committee creates lists of books to encourage young adults to read for pleasure. Current List Previous Lists Policies and Procedures Committee Contacts Teen Book Finder App Please note: This list has been retired. 2017 Popular Paperbacks Titles: 2017 Popular Paperbacks Titles Biography: Who Lives, Who Dies, Who Tells Your Story: This selection of biographies, autobiographies, and memoirs highlights the struggles young adults face in forming their identities and deciding what kinds of people they want to be. Top Ten Previous Lists 2016 Titles 2014 Titles 2013 Titles

Odyssey Award for Excellence in Audiobook Production | Young Adult Library Services Association (YALSA) This annual award is given to the producer of the best audiobook produced for children and/or young adults, available in English in the United States. The selection committee also selects honor titles. The Odyssey Award is jointly given and administered by the Association for Library Service to Children (ALSC) and the Young Adult Library Services Association (YALSA), divisions of ALA, and is sponsored by Booklist. The selection committee consists of nine members: four members appointed by ALSC; four members appointed by YALSA; a chair, whose appointment alternates between ALSC and YALSA divisions; and a consultant from the staff of Booklist magazine who works with audiobooks. The consultant may participate fully in all book discussions but may not participate in voting. Suggest a Title Producer Submission Form Award Policies & Procedures Committee Contacts Seals Winners Best of the Best Teen Book Finder App

Custom Library Book Bikes Roll Out Across US | American Libraries Magazine In Cleveland Heights, Ohio, where winter temperatures reached a record low of –11°F the first week of January 2014, many bicyclists would have likely opted to drive. But for one librarian and avid bike rider, the weather was no obstacle for his commitment to his library’s book bike program. “We were lucky with the weather, really,” Eric Litschel, adult services associate at Cleveland Heights–University Heights Public Library (CHUHPL), tells American Libraries. “The worst day I rode was probably a little over 10 degrees.” Sam Lapides, special projects coordinator at CHUHPL, says the library’s Book Bike program, initiated in spring 2013, was supposed to run for only spring, summer, and fall. Beginning as a pilot in which volunteers and staff rode a custom-made Haley cargo tricycle, loaded with books to give away at local events and facilities, Book Bike is evolving into an extension of the checkout desk. Funding Funding sources for these projects vary. How to get started

YALSA's Teen Book Finder App & Database | Young Adult Library Services Association (YALSA) YALSA's Teen Book Finder is a free online database and app to help teens, parents, librarians and library staff, educators, and anyone who loves YA literature access nearly 4,000 titles recognized YALSA's awards and lists on their smartphone. Have an Android phone? Download the Android version now! Have an iPod Touch or an iPhone? Download the iOS app now! App features include: a homepage featuring three titles from the database, refreshed each day the ability to search for books by author, title, award/list year, genre, by award, and by book list a Find It! The android and iOS versions of the app are funded by the Dollar General Literacy Foundation. Have a question or comment about the app or want to report a bug? Use this QR Code to get the app today!

National Book Foundation, Presenter of the National Book Awards, www.nationalbook.org Eliterate Librarian Non-Fiction Writing General Non-Fiction Ideas / Resources: Activity Clues - A fun writing task which requires children to think of clues related to particular activities. Write to Santa! - Send a letter to Santa at Christmas, and receive a reply too! Describing Yourself - A game, useful for the beginning of term, which helps you and the children get to know each other. Letter Writing - Writing letters can be extremely enjoyable for children, and this page shows you how. Letter Writing Frame - A great letter writing frame for your children to use (PDF). Persuasive Writing / Adverts: Persuasive Words and Phrases - A selection of words and phrases which children can use within their own persuasive writing. Discussion: Discursive Writing - A discursive text (in PDF) with a framework. Explanations: Postcards - A fantastic way for the children to tell you about their holidays, encouraging independent writing without intimidating them.