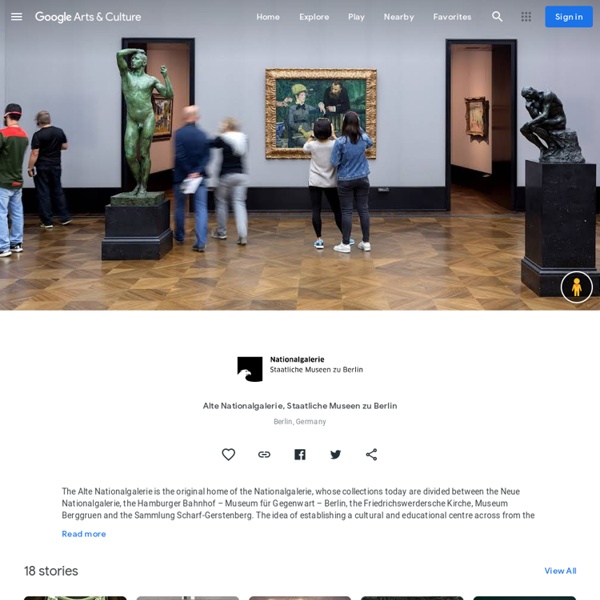 The Alte Nationalgalerie is the original home of the Nationalgalerie, whose collections today are divided between the Neue Nationalgalerie, the Hamburger Bahnhof – Museum für Gegenwart – Berlin, the Friedrichswerdersche Kirche, Museum Berggruen and the Sammlung Scharf-Gerstenberg. The idea of establishing a cultural and educational centre across from the Berlin Palace dates back to the time of Friedrich Wilhelm IV, who dreamt of creating a "sanctuary for art and science" on the site. The basic architectural concept for the Alte Nationalgalerie – a temple-like building raised on a plinth decorated with motifs from antiquity – came from the king himself. The building was designed by Friedrich August Stüler, a student of Schinkel who also designed the Neues Museum. It was completed after Stüler’s death by another of Schinkel’s students, Johann Heinrich Strack. Header image © Staatliche Museen zu Berlin / David von Becker

Collections - Eθνικό Αρχαιολογικό Μουσείο n The National Archaeological Museum is the largest museum in Greece and one of the most important in the world. Originally destined to receive all the 19th century excavations, mainly from Attica and other parts of the country, it gradually took the form of a central National Archaeological Museum and was enriched with finds from all parts of the Greek world. His rich collections, enumerating more than 11,000 exhibits, offer the visitor a panorama of ancient Greek culture from the prehistory to the late antiquity. The museum is housed in the imposing neoclassical building, built at the end of the 19th century in designs by L. Lange and eventually formed by Ernst Ziller. Its exhibition grounds, dozens of halls on each floor, cover an area of ​​8,000 m². and houses the five major permanent collections: The Collection of Prehistoric Antiquities, which includes works of the great civilizations that developed in the Aegean from the 6th millennium to 1050 BC.

National Museum of Modern and Contemporary Art, Korea, Seoul, South Korea Since opening its door in 1969, the National Museum of Modern and Contemporary Art (MMCA), Korea has lived through the history of Korean art. In the process, MMCA established itself as a representative institution of Korean modern art. The museum’s four branches, including Gwacheon (opened in 1986), Deoksugung (opened in 1998), Seoul (opened in 2013), and Cheongju (expected to open in 2017), each in its own way, will continue to carry out MMCA’s commitment to the art and culture of Korea by enriching the first-hand cultural experience of the viewing public. Boasting a superb natural landscape surrounding the site, MMCA Gwacheon will be devoted to various genres of visual arts such as architecture, design, and crafts. Located within a historical site, MMCA Deoksugung will showcase modern art from Korea and overseas.

National Museum - New Delhi, New Delhi , Inde — Google Arts & Culture The National Museum, New Delhi as we see it today in the majestic building on the corner of Janpath and Maulana Azad Road is the prime museum in the country. The blue-print for establishing the National Museum in Delhi had been prepared by the Gwyer Committee set up by the Government of India in 1946. When an Exhibition of Indian Art consisting of selected artefacts from various museums of India, sponsored by the Royal Academy (London) with the co-operation of the Government of India and Britain, was on display in the galleries of Burlington House, London during the winter months of 1947-48, it was decided to display the same collection under a single roof in Delhi before the return of exhibits to their respective museums.

Musée du costume at the national theatre - embed.culturalspot Costume informs the audience about a character, their social position, personality, and contributes to the creation of the world of a play. For many actors, putting on their costume is an important part of getting into character before going on stage. It can affect their posture and how they move. Sometimes they will change costume several times during a show, demonstrating the passage of time, a transformation of their character, or to become different characters. The costume department of the National Theatre has fifty-four members of staff who work in four main areas: Costume Production; Running Wardrobe; Wigs, Hair & Make-up; and Costume and Prop Hire.

Download 576 Free Art Books from The Metropolitan Museum of Art You could pay $118 on Amazon for the Metropolitan Museum of Art’s catalog The Art of Illumination: The Limbourg Brothers and the Belles Heures of Jean de France, Duc de Berry. Or you could pay $0 to download it at MetPublications, the site offering “five decades of Met Museum publications on art history available to read, download, and/or search for free.” If that strikes you as an obvious choice, prepare to spend some serious time browsing MetPublications’ collection of free art books and catalogs. You may remember that we featured the site a few years ago, back when it offered 397 whole books free for the reading, including American Impressionism and Realism: The Painting of Modern Life, 1885–1915; Leonardo da Vinci: Anatomical Drawings from the Royal Library; and Wisdom Embodied: Chinese Buddhist and Daoist Sculpture in The Metropolitan Museum of Art.