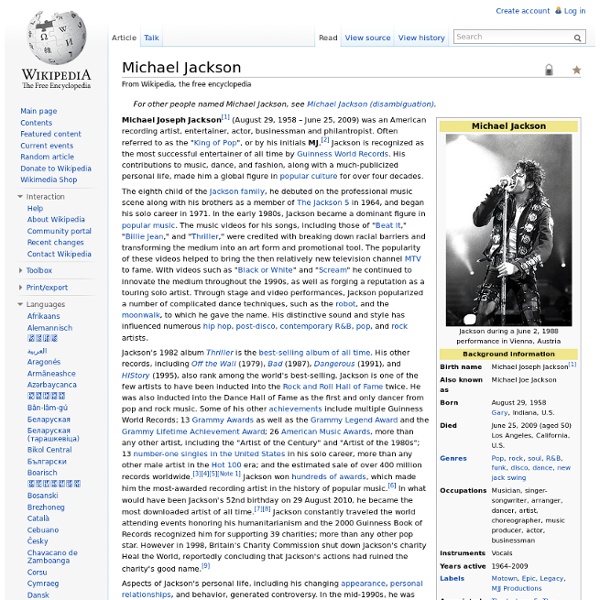 Michael Joseph Jackson[2][3] (August 29, 1958 – June 25, 2009)[4] was an American singer-songwriter, actor, and businessman. Often referred to as the King of Pop,[5][6] his contributions to music, dance, and fashion, along with his publicized personal life, made him a global figure in popular culture for over four decades. Life and career 1958–75: Early life and The Jackson 5 Jackson's childhood home in Gary, Indiana, showing floral tributes after his death In an interview with Martin Bashir, later included in the 2003 broadcast of Living with Michael Jackson, Jackson acknowledged that his father hurt him when he was a child, but was nonetheless a "genius", as he admitted his father's strict discipline played a huge role in his success. Jackson (center) as a member of The Jackson 5 in 1972 1975–81: Move to Epic and Off the Wall 1982–83: Thriller and Motown 25: Yesterday, Today, Forever Time described Jackson's influence at that point as "Star of records, radio, rock video.

Silent film A silent film is a film with no synchronized recorded sound, especially with no spoken dialogue. In silent films for entertainment the dialogue is transmitted through muted gestures, mime and title cards. The idea of combining motion pictures with recorded sound is nearly as old as film itself, but because of the technical challenges involved, synchronized dialogue was only made practical in the late 1920s with the perfection of the Audion amplifier tube and the introduction of the Vitaphone system. (The term silent film is therefore a retronym, that is, a term created to distinguish something retroactively – the descriptor silent used before the late 1920s would have been a redundancy.) A September 2013 report by the United States Library of Congress announced that a total of 70% of American silent films are believed to be completely lost.[1] Elements (1894 – 1929)[edit] The earliest precursors of film began with image projection through the use of an item known as the magic lantern.

Rock Rock music is a genre of popular music that originated as "rock and roll" in the United States in the 1950s, and developed into a range of different styles in the 1960s and later, particularly in the United Kingdom and the United States.[1][2] It has its roots in 1940s' and 1950s' rock and roll, itself heavily influenced by rhythm and blues and country music. Rock music also drew strongly on a number of other genres such as blues and folk, and incorporated influences from jazz, classical and other musical sources. By the late 1960s, referred to as the "golden age"[3] or "classic rock"[1] period, a number of distinct rock music sub-genres had emerged, including hybrids like blues rock, folk rock, country rock, and jazz-rock fusion, many of which contributed to the development of psychedelic rock, which was influenced by the countercultural psychedelic scene. Characteristics[edit] A simple 4/4 drum pattern common in rock music Play Origins[edit] Rock and roll[edit] "In-between years"[edit]

Reggae Reggae is a music genre that originated in Jamaica in the late 1960s. While sometimes used in a broad sense to refer to most types of popular Jamaican dance music, the term reggae more properly denotes a particular music style that was strongly influenced by traditional mento and calypso music, as well as American jazz and rhythm and blues, and evolved out of the earlier genres ska and rocksteady. Stylistically, reggae incorporates some of the musical elements of rhythm and blues, jazz, mento, calypso, African, and Latin American music, as well as other genres. One of the most easily recognizable elements is offbeat rhythms; staccato chords played by a guitar or piano (or both) on the offbeats of the measure. The tempo of reggae is usually slower than ska and rocksteady.[1] The concept of "call and response" can be found throughout reggae music. Reggae has spread to many countries across the world, often incorporating local instruments and fusing with other genres. Etymology[edit]

21st-century classical music 21st-century classical music is a diverse art form. Some elements of the previous century have been retained, including post-modernism, polystylism and eclecticism, which seek to incorporate elements of all styles of music irrespective of whether these are "classical" or not—these efforts represent a slackening differentiation between the various musical genres. The combination of classical music and multimedia is a notable practice in the 21st century; the Internet, alongside its related technology, are important resources in this respect. The number of important female composers has also increased significantly. Music in the 21st century[edit] Anderson, a British composer, combines the music of traditional cultures from outside the western concert tradition with elements of modernism, spectral music and electronic music. Often styled the "Father of New Complexity", English composer Brian Ferneyhough has recently started writing works which reference those of past composers.