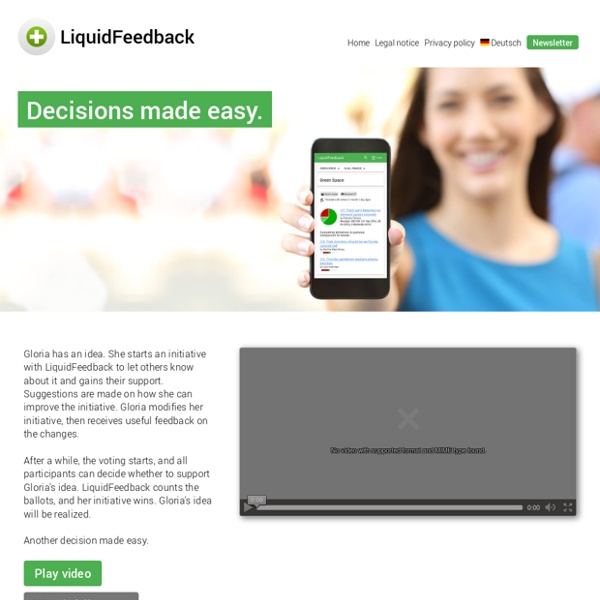 How to Sharpen Hair Clippers Blades the Easy Way - Getarazor No matter what the manufacturer said on the box, sharpen your clipper blades. Self-sharpening claims are a sales gimmick. Every blade must be sharpened to maintain its edge. Out in the Open: Occupy Wall Street Reincarnated as Open Source Software Image: Loomio Benjamin Knight helped run the Occupy camp in Wellington, New Zealand. It was 2011, when the globe was dotted with camps inspired by Occupy Wall Street, that iconic protest against economic and social inequality. The Delphi Method: Techniques and Applications The mind is but a barren soil; a soil which is soon exhausted, and will produce no crop, or only one, unless it be continually fertilized and enriched with foreign matter. -Sir Joshua Reynolds Reality is a name we give our collections of tacit assumptions about what is.

Systemic Consensus - Metagovernment - Government of, by, and for all the people From Metagovernment - Government of, by, and for all the people Systemic Consensus is a method to build decisions about several suggestions upon finding the minimal dissent, upon distillation of those choices which cause the lowest potential of conflict in the group of deciders. So if You have five suggestions for weekend activities, and three of these suggestions would make a full weekend agenda for You and Your friends, then use SC. Each participant evaluates each proposal with up to ten resistance points. Each suggestion's sum of resistance points gives the group resistance against that proposal. About Us The Open Knowledge Foundation is a non-profit organisation founded in 2004 and dedicated to promoting open data and open content in all their forms – including government data, publicly funded research and public domain cultural content. The Foundation is an international leader in its field and has extensive experience in building tools and community around open material. Our software development work includes some of the most innovative and widely acclaimed projects in the area. For example, our CKAN project is the world’s leading open source data portal platform – used by data.gov, data.gov.uk, the European Commission’s open data portal, and numerous national, regional and local portals from Austria to Brazil. The Open Knowledge Foundation’s award winning OpenSpending project enables users to explore over 13 million government spending transactions from around the world. Activities

Sharpening scissors? Knivesandtools will tell you how! You might not realize it but your pair of kitchen scissors is one of the most frequently used tools in the kitchen. You use it to cut paper, cardboard or aluminium foil, but perhaps also herbs, vegetables and even meat and fish. Not that surprising then that in time the blades of scissors lose their sharpness. You notice it when you need to apply more pressure and you can no longer cut from the beak to the tip of the scissors in one go. In that case there is only one thing left to do: sharpen your pair of scissors. Out in the Open: Hackers Bring Lawmaking Into the 21st Century Seamus Kraft, founder of OpenGov Foundation. Photo: OpenGov Foundation. Have you ever thought you could do a better job writing the laws of our country than those jokers on Capitol Hill? Or have you at least felt the urge to scratch a few lines out of a bill and replace them with something else? Here’s your chance.

Real-time Delphi Real-time Delphi (RTD) is an advanced form of the Delphi method. The advanced method “is a consultative process that uses computer technology” [1] to increase efficiency of the Delphi process. Definition and idea[edit] Buying a New Car Introduction This illustrative tutorial is a simple case about a user, John, who intends to buy a new car. To get a quick overview, take a look at the video below or keep on reading for detailed explanations. John is actually hesitating among six different models. Those are: a BMW 1 series, a BMW 3 series, an AUDI A3, an AUDI A4, a Volvo C30, a Volvo S40.

Ace Sharpening & Co To start with you need to know a few things. First what is grit? Grit is an abrasive powder. The type of grit used to sharpen clipper blades on an aluminum clipper sharpening wheel is called ‘brown fused aluminum oxide powder’ it is the same material used to make grinding wheels for bench grinders, also it can be used as a medium for sand blasting to blast the paint off of metal parts. Clipper blade sharpening is just another use for this material.