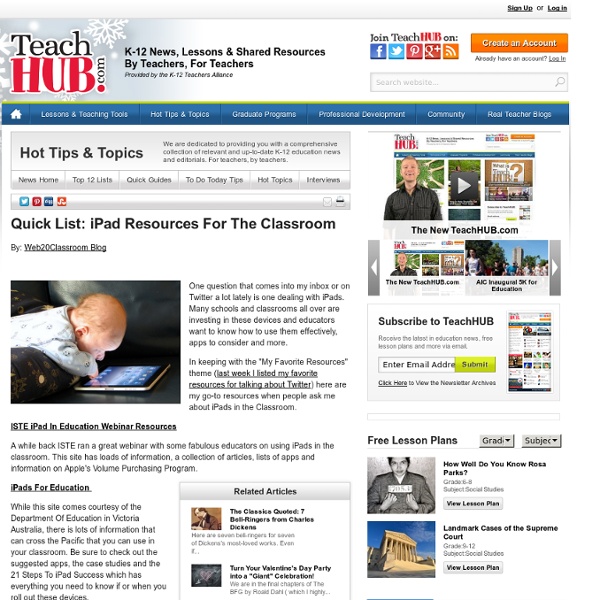 One question that comes into my inbox or on Twitter a lot lately is one dealing with iPads. Many schools and classrooms all over are investing in these devices and educators want to know how to use them effectively, apps to consider and more. In keeping with the "My Favorite Resources" theme (last week I listed my favorite resources for talking about Twitter) here are my go-to resources when people ask me about iPads in the Classroom. ISTE iPad In Education Webinar Resources A while back ISTE ran a great webinar with some fabulous educators on using iPads in the classroom. According to the National Council of Teachers of Mathematics, educators should... How do Asian nations make it to the top educational spots, and how does the U.S... Here are some useful links to hope your students comprehend this difficult... Here are a few components of Finland's current education system structure and... March into this collection of weather lesson plans for primary grades and you... iPads For Education

The Top 20 iPhone And iPad Apps of 2011 Editor’s note: Contributor Brad Spirrison is the managing editor of mobile app discovery services Appolicious, AndroidApps.com and AppVee. With this post, he continues an annual tradition of picking the best iOS apps of the year. It’s telling that Apple chose an app that debuted more than 14 months ago, Instagram, as its “iPhone App of the Year” for 2011. This should not imply that there was a shortage of quality and groundbreaking apps released this year. Far from it. From social magazines to music discovery apps to console-quality games that players can hold in the palms of their hands, there are hundreds of new titles in the iTunes App Store that will inform, organize, and entertain virtually anyone who owns an iOS device. We picked 20 of the best iOS applications that came out or received significant updates in 2011. Here are ours. 1. After launching exclusively on iPads last year, this pioneering social magazine expanded to all iOS devices in December. 2. 3. 4. 5. 6. 7. 8. iMuscle 9.

7 Apps That Will Help You Use Your iPad For Writing Projects While each of us has our own particular needs, I’m sure one or more of these apps will serve your needs. So get ready to set up a folder on your tablet and download a useful collection of resources. Evernote At the top of the list, the popular Evernote app (iTunes Store Link) and web syncing service is an essential tool for writing on the iPad. Evernote includes a basic text writing tool that of course also syncs back to your computer or other devices. Infinote Pinboard For brainstorming and clustering your ideas, download Infinote Pinboard (iTunes Store Link). SimpleNote The best free option for a fully fledged writing application on your iPad is SimpleNote (iTunes Store Link), which I reviewed here. Private Journal If you’re a frequent journal writer, the application, Private Journal (iTunes Store Link) works very well for the iPad. While this app doesn’t have automatic syncing features, you can assign a passcode so no one else will have access to your most personal writings. WordPress

Buying Guide: iPad cases Whether you have a new iPad, an older iPad, or an iPad mini, consider using a protective case or carrying bag to minimize the risk of damage. True, the sleek design of this tablet family makes you want to show off your iPad, but they are still vulnerable to scratches and scuffs. While we haven’t tested every case and bag on the market, here’s a rundown of the most common types, along with a few good examples of each. Shopping tips There are hundreds of third-party iPad cases and bags on the market, each specifically made for either the full-sized iPad or the iPad mini. When looking at the full-sized iPad line, keep in mind that, apart from the third- and fourth-generation iPads, each iPad model has a slightly different shape from the last. Though this sounds like a lot of information, relax: most cases specify which iPad models they’ll work with on the packaging. If you're shopping for a bag, and you see one that claims to be perfect for both iPads and netbooks, be suspicious.

50 really useful iPad 2 tips and tricks An absolute gem of an article by John Brandon and Graham Barlow from MacLife on 30th March over at TechRadar. This is going to become my iPad manual from here on in. Customised iPads for all iPad 2 tips and original iPad tips - get 'em here! With great new features like two video cameras, a faster processor and a thinner design, the iPad 2 is the world's best tablet device. iPad 2 review It's also fully capable of running the latest version of Apple's iOS operating system and great apps like iMovie and GarageBand. 1. iOS now supports folders. 2. Double-clicking the Home button shows you all the apps that are running on your iPad in a bar along the bottom of the screen. 3. The internet got mightily upset when Orientation Lock was replaced with Mute on the iPad during the last iOS update. 4. If you're carrying around sensitive data, you can now enable a feature that'll erase all the data on the device if someone inputs the incorrect passcode 10 times. 5. 6. 7. 8. 9. 10. 11. 12. 13. 14. 15.

iBuild iPad Lessons: TCEA 2012 AnAPPforTHAT iPhone and iPad Development GUI Kits, Stencils and Icons | Speckyboy Design Magazine Apple don’t have any comprehensive pre-built GUI resources for app development, making it very hard to match the uniformed style of the iPhone or the iPad. You will need to create your own. To help streamline your iPhone app design and development, we have put together a fairly comprehensive collection of iPhone & iPad GUI kits that will allow you to focus on developing rather than having to design everything from scratch. Within this post you will find complete GUI kits and stencils, iPhone GUI elements and PSDs and finally a collection of the best icon-sets perfectly suited for the iPhone. (Some of the preview images are intentionally to large to show the as much of each GUI as possible). iPhone PSD Vector Kit This iPhone PSD Vector set, from Smashing Magazine and designed by Renee Rist, comes with several button elements as well as six different iPhone interface options. iPhone PSD Vector Kit » iPhone GUI PSD Design Template iPhone GUI PSD Design Template » This iPhone Yahoo! This.

11 UI Kits for iPhone and iPad Development Last week we posted a collection of printable wireframing templates which included some for iPhone and iPad app design. These are great for communicating early mockups and ideas, but when it’s time for those ideas to make the jump from paper to the computer screen, it’s helpful to have a library of UI elements at your disposal. Since we love saving you time, we’ve found some for you. Here are 11 UI Kits for iPhone and iPad Development. iPad GUI Kit in PSD Format iPhone GUI PSD 3.0 Free iPhone Toolbar Icons Ultimate iPhone Stencil for Omnigraffle iPhone UI Vector Elements Free iPhone Toolbar Icons Yahoo! iPad GUI PSD iPad Vector GUI Elements iPad Stencil for Omnigraffle iPhone PSD Vector Kit About the Author Henry Jones is a web developer, designer, and entrepreneur with over 14 years of experience. Related Posts 468 shares 8 Essential iPad Apps for Bloggers Before I begin, let me just say what this list is, and what it isn’t. Read More 930 shares 30 Inspiring iPad App Websites

Making an iPad HTML5 App June 4th, 2010 About a month ago or so, Amy and I release a little (literally, it’s about 5k) HTML5 iPad App for looking up time zones. I don’t mean select-box wasteland like all other time zone sites (who likes select boxes anyway?!), I mean a nicely polished, touch-enabled UI that works offline, too. The site uses no images (‘cept for the ad), no JavaScript framworks, and no external CSS, and fits quite comfortably in a few k’s of gzipped HTML. First visit the site on your iPad (desktop browsers work, too!) Our first attempt ran really great on the Apple-supplied SDK iPad Simulator. And here’s what we did: 1. At first, we used a quite complex -webkit-gradient for the gradients in the “day bars” for the various cities. We replaced those bars with a big canvas element that sits in the background, and we redraw only those portions of the screen that undergoes changes (the different highlighting when you drag around the green bar). 2. Also a major source of slowdown. 3. 4. 5. 6. 7.

Designing Web Apps for the iPad What’s stopping you from creating a functional app/website for the iPad? My answer was the Objective-C coding language, time constraints and having to deal with the infamous Apple App Store. But if you’re a web designer, like me, and you think that designing for the iPad is outside the realm of possibility — think again. Love it or hate it, the iPad is an incredible medium. There is no denying that the touch form factor will have an incredible impact on how designers approach user interaction. In this article, I will guide you through my creative process in which I developed a simple but useful iPad web app in just one weekend: BracketSlash.com. I do not consider myself a professional iPad app developer, so if you feel a little apprehensive, let my experience be an inspiration to you. Why Did I Create a Web App for the iPad? I created a web-based iPad app mainly for my own personal use. It turned out better than I thought, so I figure it may be of use to others. Start with a Functional Goal