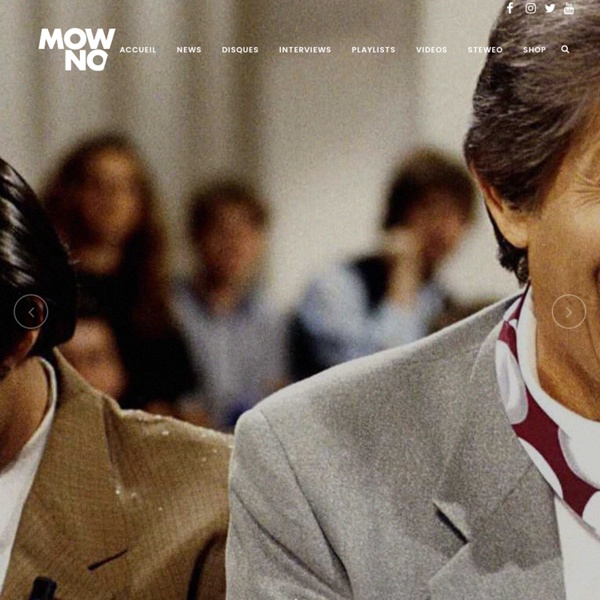 Audio Ammunition: Google's New Documentary Series on The Clash and Their Five Classic Albums The Clash are big in music news again with the arrival of their box set Sound System, which Mick Jones promises will be their final official release of all time. Jones also tells The Guardian it’s the “best box set ever,” and I just might believe it. It’s certainly one of the coolest looking. Webzine Millefeuille - Accueil LWE 2Q Reports 2011: Labels Narrowing labels down to the best of the best for any time period is always a tricky thing, as there are always so many great outlets that some are bound to get left out. Some exist in so much of a niche that it’s awkward calling them “the best” (this is always the case in writing about music though – this isn’t a race), while others keep their fans tantalized with exceedingly sparse release schedules. Mathematics, Future Times, Hivern Discs, Aus Music, Time to Express, L.I.E.S., Hessle Audio, Absurd, Crème, Hotflush, Lunar Disko, Swamp81, FXHE, Acido, and Sex Tags Mania (among others) are having a great year and deserve honorable mention.

Various Artists - Laid Compilation Various Artists - Laid Compilation If house music's always been the musical springboard for Dial, then the label's subsidiary, Laid, is their attempt to launch into the deeper machine-soul ends of the spectrum. Established with the vinylphiles in mind, Laid's until this point been wax only, releasing a series of quickly snatched up singles from artists like Rick Wade, John Roberts, Lowtec and Kassem Mosse. So it's no surprise that the news that the label would collect those recent artefacts onto a CD compilation struck the stringent (and often needlessly stiff) vinyl-only brigade as a back-turning maneuver, one that undermined the rarity of their hard-sought 12-inches. For home listeners and convenience seekers, though, the news was a blessing, a chance to collect most of Laid's almost unassailable back catalogue in one shiny round place. Kassem Mosse's "Untitled," on the other hand, is simultaneously gritty, funky and often breathtakingly beautiful.

Deadbeat - Drawn & Quartered Deadbeat - Drawn & QuarteredPretty much the only way for dub techno to sound interesting—or at least interest people—these days is to be so experimental that it barely even qualifies as "dub techno" anymore. Quite a quandary. Canadian producer Deadbeat, now based in Berlin, has always embraced this anything-goes spirit, filling last album Roots & Wire with cross-genre flirtations and presenting a stunning and canon-challenging vision of dub techno history with his Radio Rothko mix CD. Scott Monteith's sixth album is a bit daring placed against his back catalogue, then, marking the launch of his new BLKRTZ imprint by going back to basics. Don't be disheartened: this isn't an album of Basic Channel ripoffs.

Emptyset - Demiurge Emptyset - DemiurgeHow abstract can you make techno and still call it techno? How noisy can you get before it's all washed away in a torrent of fuzz? These are the kind of questions Bristol duo Emptyset pose with their second album, Demiurge, a pulsating storm of distorted frequencies that occasionally takes the shape of intelligible beats. Surgeon - Breaking the Frame Surgeon - Breaking the FrameListening to Breaking the Frame is not unlike going to an exhibit at which each of the displayed works occupies an entire wall. Each of these nine tracks is stark and enormous. Straight off, they announce themselves, and while each has a good amount of detail that you don't even have to listen very closely to notice, what's striking about them all is that those strong first impressions remain true the entire time each track plays. Two-thirds of the album is techno, but it's the other three tracks that define the album's tone, maybe because two of them open and close the album. They give extra depth and dimension to a clutch of beat-driven tracks that have plenty to offer of their own. The blippy, percussive spray of fritzing synth timbres of "Remover of Darkness" could have come out of a mid-century audio lab, its beat situating everything rather than moving bodies.

modyfier This is an archived mix from '2007. Enjoy and always remember to live the music. I do. Made Like a Tree [Copenhagen, Denmark. July 17th, 2010] - Thick, atmospheric, resonant dub techno infused with melancholy. ♫ mlat29 - Mikkel Metal.mp3 Mikkel, what have you been up to lately? Besides working on a lot of new material, I've "rediscovered" mixing and had some fun mixing at home. 20 best: Ambient Words: Tony Marcus First published in FACT:26 (June/July 2008) It’s a heavy, theoretical space to think about the relationship between music and silence, sound and thought and feeling. And there’s a conceptual glamour about music so quiet that it might fade into but also enhance background noise.

James Stinson Discography at Discogs Born on September 14, 1969, James Stinson grew up on Detroit's east side and graduated from Kettering in 1989. He died September 3, 2002 of heart complications in Newnan, Georgia, where he had moved earlier that year for health reasons. A memorial service was held at the James H. Cole Funeral Home, 2624 W. Grand Blvd., Detroit.