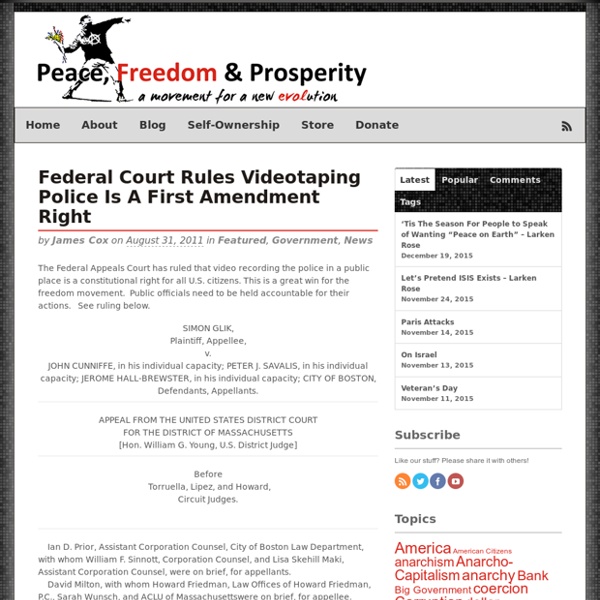 The Federal Appeals Court has ruled that video recording the police in a public place is a constitutional right for all U.S. citizens. This is a great win for the freedom movement. Public officials need to be held accountable for their actions. See ruling below. Plaintiff, Appellee, v. JOHN CUNNIFFE, in his individual capacity; PETER J. Defendants, Appellants. [Hon. Before Torruella, Lipez, and Howard, Circuit Judges. Ian D. David Milton, with whom Howard Friedman, Law Offices of Howard Friedman, P.C., Sarah Wunsch, and ACLU of Massachusettswere on brief, for appellee. Anjana Samant and Center for Constitutional Rights on brief for Berkeley Copwatch, Communities United Against Police Brutality, Justice Committee, Milwaukee Police Accountability Coalition, Nodutdol for Korean Community Development, and Portland Copwatch, amici curiae. LIPEZ, Circuit Judge. After placing the suspect in handcuffs, one of the officers turned to Glik and said, “I think you have taken enough pictures.” A. 1. 2. B. Related:  simonetraceyozboltcareless • Human rights

1,100 Green Berets set record straight on guns Text smaller Text bigger Politicians, pundits and private citizens have been sounding off on Barack Obama’s new push for gun bans, but what do the professionals whose job it is to use guns in the protection of their nation, their fellow countrymen and themselves say? Watch out. An open letter has been posted on the Professional Soldiers blog that has been signed as of this writing by more than 1,100 current and former U.S. Army Special Forces soldiers, the Green Berets. The soldiers say first it’s important to define the issue and set the record straight. “The terms ‘assault weapon’ and ‘assault rifle’ are often confused,” they say. The Green Berets, who use the weapons, point out the M4A1 carbine is a U.S. military service rifle – it is an assault rifle.” Keep your gun rights: Sign new petition “The AR-15 is not an assault rifle. Likewise, they say, a ban on “high-capacity” magazines would be irrelevant, pointing to the shooting by Eric Harris at Columbine High School as proof.

Radley Balko: “Once a town gets a SWAT team you want to use it” Radley Balko’s new book, “Rise of the Warrior Cop,” details how America’s police forces have grown to look and behave more like soldiers than neighborly Officer Krupkes walking the beat. This new breed of police, frequently equipped with military weapons and decked out in enough armor to satisfy a storm trooper, are redefining law enforcement. How did this happen? For decades, the war on drugs has empowered police to act aggressively. Once you have a SWAT team the only thing to do is kick some ass. This problem defies the usual conservative vs. liberal calculus. Few of us encounter the warrior cop phenomenon. There are several levels of militarization. Beyond that, you have a military or soldier mind-set, and that, I think, goes beyond the SWAT team. Before 9/11, what do you see as the main drivers of the equipment aspect of this phenomenon? The drug war, unquestionably. Politically, this is a fascinating issue because police seem to be totally untouchable. It’s tough. Yes and no.

40 Years in Solitary Confinement: US 'Pushing Boundaries of Cruel, Inhuman, Degrading Treatment' Today marks the dark anniversary of 40 years of solitary confinement of Albert Woodfox and Herman Wallace at Angola Prison in Louisiana. Herman Wallace, left, and Albert Woodfox in Angola prison in Louisiana. Amnesty International will hand over a 65,000-signature petition to Louisiana Governor Jindal today demanding an end to Woodfox and Wallace's solitary confinement. The 40-year isolated incarceration of Albert Woodfox and Herman Wallace "pushes the boundaries of cruel, inhuman and degrading treatment, and flies in the face of international standards to which the US is a party,” stated Everette Harvey Thompson, Southern Office Regional Director of Amnesty International USA. Describing the cell he's lived in for 40 years, Herman Wallace says, "I can make about four steps forward before I touch the door." The Guardian: Forty years in solitary: two men mark sombre anniversary in Louisiana prison Democracy Now!

Obama Admin Faces Diplomatic Uproar as Massive Surveillance of EU Governments, Citizens Exposed This is a rush transcript. Copy may not be in its final form. AMY GOODMAN: This is Democracy Now!, democracynow.org, The War and Peace Report. Over the weekend, the German magazine Der Spiegel revealed the NSA spied on European Union offices in Brussels, Washington and at the United Nations. To talk about these NSA spying revelations in Europe, we’re joined by Malte Spitz. Malte, welcome to Democracy Now! MALTE SPITZ: Yes. AARON MATÉ: Speaking on Monday, Secretary of State John Kerry echoed President Obama’s comments downplaying reports of U.S. spying on the EU. SECRETARY OF STATE JOHN KERRY: I will say that every country in the world that is engaged in international affairs of national security undertakes lots of activities to protect its national security, and all kinds of information contributes to that. AARON MATÉ: That’s Secretary of State John Kerry. AMY GOODMAN: Malte Spitz, if you could talk about your own quite remarkable story, about how you got the metadata on you? SEN. SEN.

David M. Kennedy’s Don’t Shoot Reviewed: If the Police Don’t Protect Citizens From Criminals, Who Should? Photograph by Sibylle von Ulmenstein. Last year, residents in Chicago’s Washington Park neighborhood asked for my advice about a local gang problem. Their leader and block club president, Marla McCoy—a teacher’s aide, homeowner, and mother of three—noticed that drug dealing in the local park was starting up after a yearlong hiatus. Her opponent, an18-year-old upstart named Filly, had orchestrated a successful and violent coup d’etat. When Marla called to ask, “When do I call the police?” For most Americans, a dangerous gang boss would produce an instantaneous 911 call rather than a series of reflective dialogues and creative regulatory schemes. I had known Marla’s mother, the late Shauna McCoy, herself a powerful neighborhood leader. Marla might have done better to call David Kennedy, the author of a memoir about fighting crime and violence in America’s inner cities. For many reasons, this outreach wasn’t easy. But communities need to address violence right way.

Trayvon Martin and America’s Gun Laws Just after seven-thirty on the morning of February 27th, a seventeen-year-old boy named T. J. Lane walked into the cafeteria at Chardon High School, about thirty miles outside Cleveland. Russell King, a seventeen-year-old junior, was sitting at a table with another junior, Nate Mueller. Ever since the shootings at Columbine High School, in a Denver suburb, in 1999, American schools have been preparing for gunmen. At Chardon High School, kids ran through the halls screaming “Lockdown!” From the cafeteria, Frank Hall, the assistant football coach, chased Lane out of the building, and he ran off into the woods. Moments later, four ambulances arrived. At a quarter to nine, police officers with dogs captured Lane, about a mile from the school. “I hate to say it, but we trained for exactly this type of thing, a school emergency of this type,” Dan McClelland, the county sheriff, said. Danny Parmertor died that afternoon. Russell King had been too badly wounded. The day before T. The U.S.

MONSANTO Now Owns BLACKWATER | World Truth A report by Jeremy Scahill in The Nation (Blackwater’s Black Ops, 9/15/2010) revealed that the largest mercenary army in the world, Blackwater (now called Xe Services) clandestine intelligence services was sold to the multinational Monsanto. Blackwater was renamed in 2009 after becoming famous in the world with numerous reports of abuses in Iraq, including massacres of civilians. It remains the largest private contractor of the U.S. Department of State “security services,” that practices state terrorism by giving the government the opportunity to deny it. Many military and former CIA officers work for Blackwater or related companies created to divert attention from their bad reputation and make more profit selling their nefarious services-ranging from information and intelligence to infiltration, political lobbying and paramilitary training – for other governments, banks and multinational corporations. * The author is a researcher at ETC Group Eddie (2112 Posts)

The 5 Creepiest Unsolved Crimes Nobody Can Explain Dear Internet: We have to admit something -- we've been getting kinda cocky, recently. Whether we're explaining the phenomenon of alien abduction, debunking every textbook ever or doing some third thing, we've been spending a lot of time acting like we have all the answers. And it's started to go to our heads. But that all changes now. There are unsolved crimes, and then there are the kind of creepy, "What the hell could possibly be going on here" capers that keep the cops, and anyone who hears about them, up at night. Here are the real cases that almost fall into X-Files territory: The victim was found dead at 6:30 am, December 1, 1948, under a street lamp at Somerton Beach in Australia. But more on that in a moment. Would have saved them a ton of time, and been exactly as helpful. So the cops must have been half expecting it when the coroner returned with the cause of death: "Sudden, acute onset of damned if I know." Every breakthrough seemed to increase the mystery. It Gets Weirder: