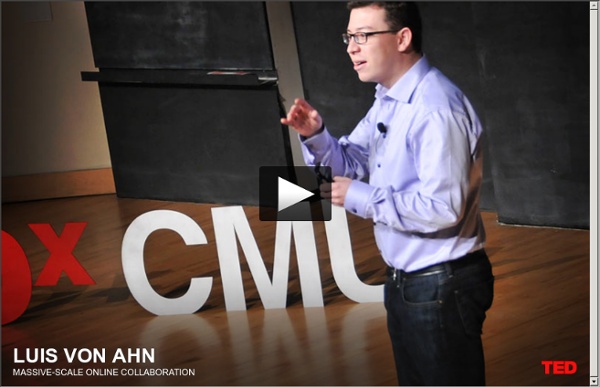 Baby lab reveals surprisingly early gift of gab From the moment they’re born, babies are highly attuned to communicate and motivated to interact. And they’re great listeners. New research from the University of Notre Dame shows that during the first year of life, when babies spend so much time listening to language, they’re actually tracking word patterns that will support their process of word- learning that occurs between the ages of about 18 months and two years. “Babies are constantly looking for language clues in context and sound,” says Jill Lany, assistant professor of psychology and director of Notre Dame’s baby lab, where she conducts studies on how babies acquire language. “My research suggests that there are some surprising clues in the sound stream that may help babies learn the meanings of words.

Cairns Blog: Crowdsourcing Governance [Video intro ends at 52 seconds; Intro by Dr. Gref ends at 2'18; Speech ends at 11'15; then Q&A] For Prime Minister Putin's presentation, click here. Crowdsourcing Governance We’ve heard today that as individuals we are smarter collaborating together than working alone. That is as true for institutions as it is for individuals. Social enterprise and meritocracy: watch out for the blindspots Social enterprise is attracting meritocrats – people with achievements from different walks of life. Energy to do good and to do well at the same time is admirable. The influx of talent brings resources and challenges mediocrity, yet our 'merits' in one field may not help in others. Most social enterprises exist to help people left behind by our meritocratic world. Those who have lived the problem may have better solutions than meritocratic entrepreneurs.

Babies understand grammar long before they learn how to speak My experience is that if I come across a new concept (in Russian or Norwegian), I have to deconstruct my own way of saying it, think of the logic while simutaneously not questioning the logic (or lack of), and learn to say it. After time, you accept it. Russian especially, for English speakers. What started out some years ago as "Why and how the fuck do you say this? It cannot be done," changed over time to, "There's no other way to say it, and I can give reasons why." There's a well-defined critical period for language acquisition early in life, when new neurons are actually being formed in the child's mind that are shaped by their linguistic experience.

Social enterprises can help staff provide personalised healthcare Next month six NHS nurses from Derby will have a new employer. They are launching themselves as a community interest company with an estimated turnover of half a million pounds, providing support to around 80 teenage parents and their young children across the county. Some 170 miles away in the Medway town of Gillingham, Kent, 1,250 staff working in 38 different community health services will also leave the NHS on 1 April, when an entire arm of their primary care trust (PCT) becomes a social enterprise worth £55m a year. Derby City Family Nurse Partnership and Medway Community Healthcare are among the latest social enterprises to be set up under the government's Right to Request initiative, first launched by Labour in 2008 and continued by the new coalition government. The scheme gives staff working for PCTs the freedom to leave the NHS and provide their service as a social enterprise instead. Article from the Guardian's Social Enterprise network:

How to organize a dictionary of made-up languages Having studied translation, I can accept a Universal Translator as a necessary fictional device, and I am not against its use in fiction, but in reality a Universal Translator would be near-impossible to make. First off, not every semantic unit is shared in every language- on Earth, when a language doesn't have something and notice it, it often borrows the word from another language. So between alien races, if an alien race has no concept of a particular thing, it would not have any linguistic way to express it. Second, the lexicon (total words) of a specific language is huge and constantly evolving. The space necessary to stock all the information of every language, in every variety, for entire species, would be near infinite. Solver Develops Solution to Help Clean Up Remaining Oil From the 1989 Exxon Valdez Disaster Boston, MA and Cordova, AK - November 7, 2007 - InnoCentive, the leader in prize-based Open Innovation sourcing, is helping to make a positive impact on Environmental Conservation by working with the Oil Spill Recovery Institute (OSRI) and other conservation groups. OSRI has posted 3 Challenges on the InnoCentive website, all dealing with oil spill recovery issues. The first of these challenges was solved last week by an oil industry outsider who used his expertise in the concrete industry to come up with the winning solution.

"Behavior Architects" Tackle India's Social Problems The bureaucrats running Mumbai’s suburban rail network had a problem: Commuters and people living and working close to train stations were taking shortcuts across the tracks. This reckless behavior was causing 6,000 deaths in the metropolitan area every year. The transit authorities asked FinalMile, a local marketing consultant, to find a solution. FinalMile had experience in applying behavioral economics to sell consumer goods; the city hoped it could use similar techniques to save lives. IPA character picker 11 ishida >> apps Character pickers are especially useful for people who don't know a script well, as characters are displayed in ways that aid identification. See the notes for details. Click on characters to create text in the box, then copy & paste to your content.

Microwork Microwork is a series of small tasks which together comprise a large unified project, and are completed by many people over the Internet. [1] [2] Microwork is considered the smallest unit of work in a virtual assembly line. [3] It is most often used to describe tasks for which no efficient algorithm has been devised, and require human intelligence to complete reliably. The term was developed in 2008 by Leila Chirayath Janah of Samasource. [4] [5] Microtasking[edit] Drucker's Contributions to Nonprofit Management By Leslie Lenkowsky For most of his career, Peter F. Drucker was renowned as an expert on business management, whose books and articles were widely read, and advice widely sought, by corporate leaders throughout the world. But late in his life, he turned his attention to the nonprofit world, writing a best-selling guide to running charitable groups and creating a foundation bearing his name to strengthen leadership in what he called the "social sector." This shift is not as surprising as it might initially seem. Mr.

Embodied Cognition  Embodied Cognition is a growing research program in cognitive science that emphasizes the formative role the environment plays in the development of cognitive processes. The general theory contends that cognitive processes develop when a tightly coupled system emerges from real-time, goal-directed interactions between organisms and their environment; the nature of these interactions influences the formation and further specifies the nature of the developing cognitive capacities. Since embodied accounts of cognition have been formulated in a variety of different ways in each of the sub-fields comprising cognitive science (that is, developmental psychology, artificial life/robotics, linguistics, and philosophy of mind), a rich interdisciplinary research program continues to emerge. Table of Contents

wcolmen - yes, thats' the idea. Join in! Become a team member and share your insights! by mindshare2000 Dec 30