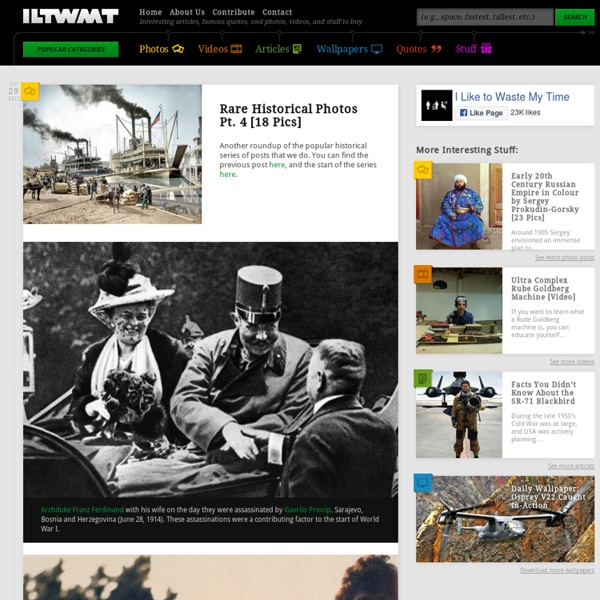 53 Colorized Black & White Photos From History Subscribe Share on FacebookShare on Twitter Share Tweet Up until the 1970s, color photography was extremely rare, and so when we think about history prior to that time, we often envision it in black and white. Today’s technology now enables us to “colorize” historical photos, giving us our only chance at seeing what the world really looked like back then. And it was truly spectacular. “A Push” in the Right Direction Aug 6 2012 Introduction FDR once said, “Be sincere, be brief, be seated.” In recent years I have attempted to find ways to “get out of the way” of student learning more, and not be the omnipotent source of information and ideas. This past year, this led to my adventures in the world of tweeting. I began this year with lofty AP U.S.

Rare Historical Photos Pt. 2 [19 Pics Rare Historical Photos Pt. 2 [19 Pics] Oct 2 2012 Our first post highlighting rare photos was quite successful (1,300 views). Now you can travel back in time again with our second installment of interesting historical photos. Babies On Display: When A Hospital Couldn't Save Them, A Sideshow Did Lucille Horn and her daughter Barbara on a recent visit to StoryCorps in Long Beach, N.Y. StoryCorps hide caption toggle caption StoryCorps The Rise of Hitler: Mr. Men project The following activity is a great way of rounding off or revising the Rise of Hitler with IGCSE students. They produce a 'Mr. Men' book about the topic and then read these to primary school / Year 7 students in a team challenge. A.

Rare Historical Photos Pt. 3 [21 Pics Rare Historical Photos Pt. 3 [21 Pics] Oct 12 2012 Well part two of the series did even better than part one, so here are some more awesome historical photos and info. An American soldier replaces "Adolf-Hitler-Str." sign with a "Roosevelt Blvd" one in Berlin, Germany, 1945. Gloria Steinem greets protesters at the barricades before speaking at the Women's March on Washington.John Minchillo/AP An estimated half a million people joined the Women's March on Washington on a crisp Saturday the day after Donald Trump was sworn in as the 45th President of the US. The march aims to bring together women across diverse backgrounds and send a bold message to the new administration that they will not be ignored or have their rights stomped on. People carried signs with calls for gender equality and anti-Trump statements, though the rally's organizers have insisted the demonstration is more pro-women than anti-Trump. Many sported pink knitted beanies called "pussy hats," a symbol of solidarity among the protestors.

Calendar One account. All of Google. Sign in to continue to Google Calendar 7 Nuclear Weapon Screw-Ups You Won't Believe We Survived From the 1950s up through the early 1990s, the specter of nuclear war cast a shadow over the world like a giant, gloomy mushroom tattoo. Hollywood and our own morbid imaginations came up with any number of scenarios that would wipe out humanity in a series of blinding flashes: robots, Russian and American policies of mutually assured destruction. But Kubrick was probably closest when he imagined the nuclear era as a game of poker between cocky, absent-minded lunatics. Only he probably didn't go far enough. After all, he could have never imagined ... #7.

From the Women’s March: Hear them roar for their rights Welcome to 1969, America! If there was any doubt remaining, hundreds of thousands of women and men made clear that we are a nation in disagreement. Just 24 hours after Donald J. Trump was sworn in as the 45th president of the United States, the societal shift in our nation came into stark visible and tangible relief. You could see it — you could feel it — on Saturday as thousands upon thousands of women from across America marched on Washington, in Miami, in Chicago and so many other cities across the country.