The TO KILL A MOCKINGBIRD Student Survival Guide 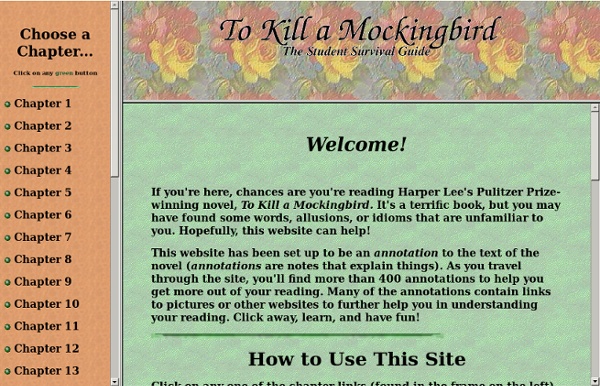 Related:  To Kill a Mockingbird

EMINEM LYRICS - Mockingbird Yeah I know sometimes things may not always make sense to you right now But hey, what daddy always tell you? Straighten up little soldier Stiffen up that upper lip What you crying about? You got me. Hailie, I know you miss your mom, and I know you miss your dad When I'm gone but I'm trying to give you the life that I never had I can see you're sad, even when you smile, even when you laugh I can see it in your eyes, deep inside you want to cry 'Cause you're scared, I ain't there? [Chorus:] Now hush little baby, don't you cry Everything's gonna be alright Stiffen that upper lip up, little lady, I told ya Daddy's here to hold ya through the night I know mommy's not here right now and we don't know why We feel how we feel inside It may seem a little crazy, pretty baby But I promise mama's gon' be alright [Chorus] Thanks to GeeQ3 for adding these lyrics. EMINEM lyrics are property and copyright of their owners."

"To Kill A Mockingbird" by Lee Harper My Level 6 students and I meet four times a week for 2.5 hours/day. We began "To Kill A Mockingbird" at the beginning of the year, on January 3rd and we are beginning Chapter 13 tomorrow, February 6. There are 31 Chapters in total, and so I expect us to finish up in one month or two. My language school basically handed me the novel and said, "go teach", so this is how I've conducted the class thus far. Resource: I have found this website extremely helpful since it lists allusions, vocabulary, and idiomatic expressions by chapter for us. www.lausd.k12.ca.us/Belmont_HS/tkm/ If this link doesn't work for some reason, just Google "To Kill a Mockingbird" studyguide and you'll find this link (perhaps third from the top). Introduction: I introduced the book with songs such as "Sweet Home Alabama" by Lynrd Skynrd and explained to my students that this song was an answer to the songs "Alabama" and "Southern Man" by Neil Young. The Depression is another background topic to discuss.

Fun Facts - 1920s Art and Architecture For The Decade The turn of the century saw early modernism in art, design, and architecture, which continued through to 1940 and the war. Skyscrapers were erected and hundreds of architects competed for the work. The first successful design was the Woolworth Building in New York. Books and Literature For The Decade Three important groups during this period were: The Algonquin Round Table, also called THE ROUND TABLE. The first important movement of black artists and writers in the US was the Harlem Renaissance. The Lost Generation, consisted of self-exiled expatriates who lived and wrote in Paris between the wars. Other who were of importance during this decade include E. Fads and Fashion For The Decade

Historical Background As of July 1, 2013 ThinkQuest has been discontinued. We would like to thank everyone for being a part of the ThinkQuest global community: Students - For your limitless creativity and innovation, which inspires us all. Teachers - For your passion in guiding students on their quest. Partners - For your unwavering support and evangelism. Parents - For supporting the use of technology not only as an instrument of learning, but as a means of creating knowledge. We encourage everyone to continue to “Think, Create and Collaborate,” unleashing the power of technology to teach, share, and inspire. Best wishes, The Oracle Education Foundation Plot To Kill a Mockingbird: Quiz Scroll through the page to review your answers. The correct answer is highlighted in green. Your incorrect answers (if any) are highlighted in red. 1. 2. 3. 4. 5. 6. 7. 8. 9. 10. 11. 12. 13. 14. 15. 16. 17. 18. 19. 20. 21. 22. 23. 24. 25.

The Race Card Project Mary Murphy & Company To Kill a Mockingbird: Plot Overview Scout Finch lives with her brother, Jem, and their widowed father, Atticus, in the sleepy Alabama town of Maycomb. Maycomb is suffering through the Great Depression, but Atticus is a prominent lawyer and the Finch family is reasonably well off in comparison to the rest of society. One summer, Jem and Scout befriend a boy named Dill, who has come to live in their neighborhood for the summer, and the trio acts out stories together. Eventually, Dill becomes fascinated with the spooky house on their street called the Radley Place. Scout goes to school for the first time that fall and detests it. To the consternation of Maycomb’s racist white community, Atticus agrees to defend a black man named Tom Robinson, who has been accused of raping a white woman. Atticus’s sister, Alexandra, comes to live with the Finches the next summer. At the trial itself, the children sit in the “colored balcony” with the town’s black citizens.

The Blues . Blues Classroom . Lesson Plans . Identity, Oppression, and Protest Click here to download a PDF of this lesson. (1.8 MB) Overview African American history during the Jim Crow era includes encounters with poverty, racism, disrespect, and protest. Harper Lee develops all four of these themes in her famous 1960 novel, To Kill a Mockingbird. To help students understand these ideas, this lesson incorporates the blues and other literature of the time. Learning Objectives By completing this lesson, the student will: Explore life for African Americans during the Jim Crow era Consider terms of respect and disrespect Analyze the effectiveness of different forms of cultural protest Standards Addresses the following themes in the National Curriculum Standards for English Language Arts: Primary: 1, 2 Secondary: 6, 9 Resources Needed Music: The Blues Teacher's Guide CD: Big Bill Broonzy, "When Will I Get to Be Called a Man" Muddy Waters, "Mannish Boy" "John Henry" Skip James, "Hard Time Killin' Floor Blues" J.B. How do you define manhood? Synthesis and Assessment 1.

To Kill A Mockingbird: SYMBOLISM / SYMBOLS / CONTRASTS IN MAYCOMB SOCIETY by Harper Lee Free Study Guide: To Kill A Mockingbird by Harper Lee - Free BookNotes Previous Page | Table of Contents | Next Page Downloadable / Printable Version SYMBOLISM / SYMBOLS in To Kill a Mockingbird Harper Lee has used symbolism rather extensively throughout the novel and a great deal of it refers to the problems of racism in the South during the early twentieth century. Scout’s understanding of Walter Cunningham’s poverty and his self-pride is a prime example of this. Miss Maudie is a classic example of the enlightened woman living in an age of suppressed womanhood. Mrs. Finally, the deepest symbolism conveyed is through the use of the concept of the mockingbird. In the novel, the people of Maycomb only know Boo Radley and Tom Robinson by what others say about them. Maycomb county comprises of a conglomeration of various sections of people, who live together in studied harmony. Outwardly, the community is divided into two sections: the white community and the black community.

Related:
Related:  To Kill a Mockingbird