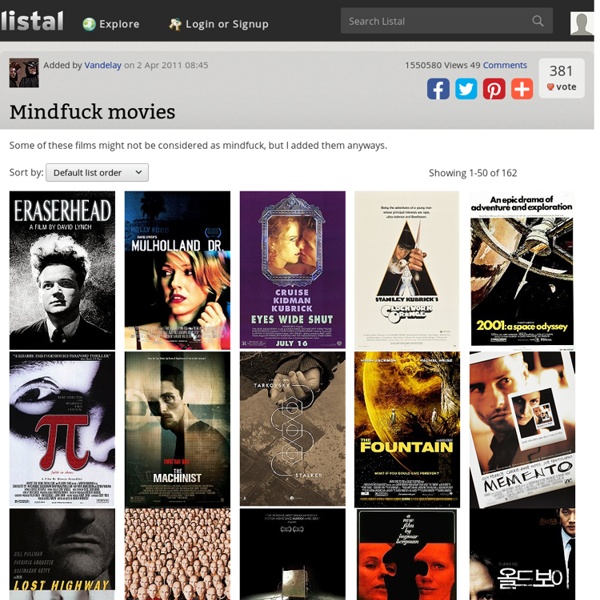 My Top 50 Favorite Mindfuck Movies I thought I could rank them, but that would be too difficult, so here they are in alphabetical order. 1. 21 Grams 2. Adjustment Bureau, The 3. Adaptation Combustible Celluloid - Guide to Cult Movies and Cult Films Army of Darkness (1993) The third film in Sam Raimi's Evil Dead trilogy features more zombies, more action, more laughs, and more kisses. With Bruce Campbell. "Gimme some sugar, baby!" 16 Strangest Movies Everyone Should See There are movies you see, and then there are movies you experience. This list compiles 16 of the strangest movies that must be seen to be believed. They break all the rules to surprise us, challenge us, and give us one-of-a-kind cinematic experience. If you are bored of watching those Hollywood cliches, this list of 16 strangest foreign movies is what you need for a change. 1.

Get wet and wild with some slow motion insanity - The Feed Blog (CBS News) Do you like your parties wet, wild and out of control? Are you in the mood for something eye-popping, humorous and bizarre? Do you happen to like slow motion...? Promote Documentary Films. Promote Consciousness. Promote Humanity What Black Is, Really “Excuse me,but um…what are you?......No, I mean what are you, really?.... Yeh, but what else?” Best Film Speeches and Monologues Contemptuous talk-show radio host in Dallas Texas, Jewish radio personality Barry Champlain (Eric Bogosian) held all the phone calls, to tell his listening audience what he really felt about them, as the camera circled around him: Believe it or not, you make perfect sense to me. I should hang. I'm a hypocrite. I ask for sincerity and I lie. I denounce the system as I embrace it.

Top 50 Dystopian Movies of All Time Massive dehumanization, totalitarian government, rampant disease, post-apocalyptic terrains, cyber-genetic technologies, societal chaos and widespread urban violence are some of the common themes in dystopian films which bravely examine the ominous shadow cast by future. A dystopia is a fictional society that is the antithesis or complete opposite of a utopia, an ideal world with a perfect social, political and technological infrastructure. A world without chaos, strife or hunger. 10 Disney Movies With Horrific Origins Weird Stuff As many people know by now, some of Disney’s much loved animated musicals, beloved and enjoyed by so many happy little children for the past eighty years, have truly horrific origins involving rape, cannibalism, torture and other very nasty happenings. Some people believe Disney improved the original stories, making them more accessible and enjoyable to the general public, others are of the opinion that Disney mauled them, or at least failed completely to do them justice. Here are ten examples of some of the lesser-known origins of Disney’s movies, some going back in history to sources that many people are unaware of, others revealing origins that haven’t previously been discussed in such detail on the internet. Whatever your own personal opinions of these disturbing origins and Disney’s popular renditions of them, I hope you enjoy reading this list as much as I enjoyed writing it. Pinocchio: Corpses and Murder

The real life models for Classic Pin-Up paintings A series of comparisons between the classic pinup girls and photos that have served as models for achieving them;) via 50 Movies You Have to Watch Before You Die Movies are an important part of popular culture. You may view them as less refined than books, but the stories are essentially the same. As much an art form as painting, video games, music, and books, movies capture our imagination and show us perspectives we’d never see on our own. Life is short – don’t let it pass you by without seeing these movie classics: