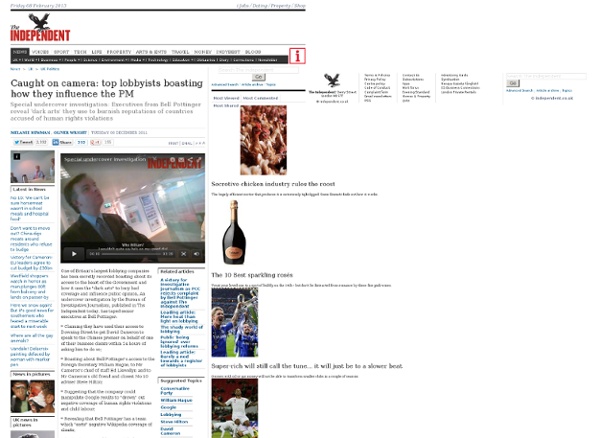 * Claiming they have used their access to Downing Street to get David Cameron to speak to the Chinese premier on behalf of one of their business clients within 24 hours of asking him to do so; * Boasting about Bell Pottinger's access to the Foreign Secretary William Hague, to Mr Cameron's chief of staff Ed Llewellyn and to Mr Cameron's old friend and closest No 10 adviser Steve Hilton; * Suggesting that the company could manipulate Google results to "drown" out negative coverage of human rights violations and child labour; * Revealing that Bell Pottinger has a team which "sorts" negative Wikipedia coverage of clients; * Saying it was possible to use MPs known to be critical of investigative programmes to attack their reporting for minor errors. In Uzbekistan, child labour is used in cotton fields to fulfil state quotas and the country also has a terrible human rights record: the think tank Freedom House put it on its 2011 list of the "Worst of the Worst" repressive regimes.

Photos du mur Undercover police had children with activists | UK news Two undercover police officers secretly fathered children with political campaigners they had been sent to spy on and later disappeared completely from the lives of their offspring, the Guardian can reveal. In both cases, the children have grown up not knowing that their biological fathers – whom they have not seen in decades – were police officers who had adopted fake identities to infiltrate activist groups. Both men have concealed their true identities from the children's mothers for many years. One of the spies was Bob Lambert, who has already admitted that he tricked a second woman into having a long-term relationship with him, as part of an intricate attempt to bolster his credibility as a committed campaigner. The second police spy followed the progress of his child and the child's mother by reading confidential police reports which tracked the mother's political activities and life. Until now it was not known that police had secretly fathered children while living undercover.

10 reasons the U.S. is no longer the land of the free Every year, the State Department issues reports on individual rights in other countries, monitoring the passage of restrictive laws and regulations around the world. Iran, for example, has been criticized for denying fair public trials and limiting privacy, while Russia has been taken to task for undermining due process. Other countries have been condemned for the use of secret evidence and torture. Even as we pass judgment on countries we consider unfree, Americans remain confident that any definition of a free nation must include their own — the land of free. Yet, the laws and practices of the land should shake that confidence. While each new national security power Washington has embraced was controversial when enacted, they are often discussed in isolation. These countries also have constitutions that purport to guarantee freedoms and rights. The list of powers acquired by the U.S. government since 9/11 puts us in rather troubling company. Assassination of U.S. citizens War crimes

Giant grain firm buys up all British wheat in ‘unprecedented’ purchase Britain’s most powerful grain company jointly owned by Cargill and Associated British Foods bought and took delivery of all the available UK feed wheat last month. The series of purchases by Frontier Agriculture, described by a number of traders as ‘unprecedented’, will reignite growing concerns among food manufacturers and campaign groups over the potential for giant trading companies and financiers with deep pockets to profit and even distort commodity markets. Traders told the Bureau of Investigative Journalism that Frontier bought all available May Futures contracts on the London International Financial Futures and Options Exchange (Liffe) in the period running up to the tender date in the last week of April. Feed wheat sets the benchmark price for wheat used in food. ‘The UK government has turned a blind eye and has aimed to block European proposals for regulating commodity markets that would bring this type of profiteering to a halt. ‘We are not speculators’, said Duffy. Backfired?

Everything You Know (about Parallel Programming) Is Wrong! David Ungar is "an out-of-the-box thinker who enjoys the challenge of building computer software systems that work like magic and fit a user's mind like a glove.". this is a summary from SPLASH 2011 in November 2011 In the end of the first decade of the new century, chips such as Tilera’s can give us a glimpse of a future in which manycore microprocessors will become commonplace: every (non-hand-held) computer’s CPU chip will contain 1,000 fairly homogeneous cores. Such a system will not be programmed like the cloud, or even a cluster because communication will be much faster relative to computation. Nor will it be programmed like today’s multicore processors because the illusion of instant memory coherency will have been dispelled by both the physical limitations imposed by the 1,000-way fan-in to the memory system, and the comparatively long physical lengths of the inter- vs. intra-core connections. If we cannot skirt Amdahl’s Law, the last 900 cores will do us no good whatsoever.

Exclusive: NSA pays £100m in secret funding for GCHQ | UK news The US government has paid at least £100m to the UK spy agency GCHQ over the last three years to secure access to and influence over Britain's intelligence gathering programmes. The top secret payments are set out in documents which make clear that the Americans expect a return on the investment, and that GCHQ has to work hard to meet their demands. "GCHQ must pull its weight and be seen to pull its weight," a GCHQ strategy briefing said. The funding underlines the closeness of the relationship between GCHQ and its US equivalent, the National Security Agency. But it will raise fears about the hold Washington has over the UK's biggest and most important intelligence agency, and whether Britain's dependency on the NSA has become too great. In one revealing document from 2010, GCHQ acknowledged that the US had "raised a number of issues with regards to meeting NSA's minimum expectations". As well as the payments, the documents seen by the Guardian reveal:

Blogs We wanted to continue our dialog about data storage by talking about the next generation file system being introduced in Windows 8. Today, NTFS is the most widely used, advanced, and feature rich file system in broad use. But when you’re reimagining Windows, as we are for Windows 8, we don’t rest on past successes, and so with Windows 8 we are also introducing a newly engineered file system. In this blog post I’d like to talk about a new file system for Windows. The key goals of ReFS are: Maintain a high degree of compatibility with a subset of NTFS features that are widely adopted while deprecating others that provide limited value at the cost of system complexity and footprint.Verify and auto-correct data. The key features of ReFS are as follows (note that some of these features are provided in conjunction with Storage Spaces). Key design attributes and features Our design attributes are closely related to our goals. Code reuse and compatibility Reliable and scalable on-disk structures

The police’s defence in the Miranda judicial review Here’s the Metropolitan Police’s grounds – drafted by Jason Beer QC of 5 Essex Court and Ben Brandon and Ben Watson, both of 3 Raymond Buildings – for resisting David Miranda’s judicial review claim in the Administrative Court this week. Miranda is challenging the police’s use of powers under Schedule 7 of the Terrorism Act 2000. My view on the police legal arguments is below, after the viewer. Click on the bottom left of the viewer to see the document in fullscreen view, with my more detailed comments highlighted in yellow. <a href=" Police&#8217;s Grounds for Resisting the Claim (PDF)</a><br /><a href=" Police&#8217;s Grounds for Resisting the Claim (Text)</a> It’s the police arguments on the “improper purpose” aspect of the case that are most interesting.

Putting SOPA on a shelf January 15, 2012 8:00 AMPutting SOPA on a shelf By Steve Benen Misguided efforts to combat online privacy have been threatening to stifle innovation, suppress free speech, and even, in some cases, undermine national security. As of yesterday, though, there’s a lot less to worry about. At issue are two related bills: the Senate’s Protect IP Act and the even more offensive Stop Online Piracy Act in the House, both of which are generated intense opposition from tech giants and First Amendment advocates. The first sign that the bills’ prospects were dwindling came Friday, when SOPA sponsors agreed to drop a key provision that would have required service providers to block access to international sites accused of piracy. The legislation ran into an even more significant problem yesterday when the White House announced its opposition to the bills. Until now, the Obama administration had not taken a position on the issue.

Alexis Ohanian - Google+ - Nearly 1000 New York tech workers will be protesting at our… SOPA Opera: Anonymous Targets Media Execs, Moguls Take Aim at Google The White House shook up the debate over the controversial Stop Online Piracy Act (SOPA) this weekend, publishing a letter that made it clear the executive branch would not back a bill without changes that addressed concerns over online censorship and damage to the very architecture of the internet. The big news is that Congress has agreed to shelve the vote on SOPA until it can find more common ground. But the battle over how best to address online piracy has now spun out far and wide. The hacktivist group Anonymous, for example, has found a juicy new target: stodgy old media executives. The group obtained and then published posts with personal information about Jeffrey L. The people in power seem a little perplexed about the guerilla tactics. If you thought fabulously wealthy media moguls were going to take this lying down, think again. Google responded via a letter to CNET.