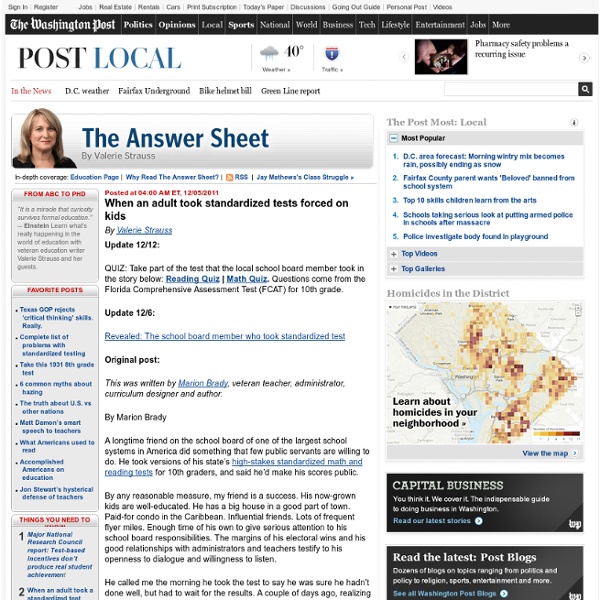 Update 12/12: QUIZ: Take part of the test that the local school board member took in the story below: Reading Quiz | Math Quiz. Questions come from the Florida Comprehensive Assessment Test (FCAT) for 10th grade. Update 12/6: Revealed: The school board member who took standardized test Original post: This was written by Marion Brady, veteran teacher, administrator, curriculum designer and author. By Marion Brady A longtime friend on the school board of one of the largest school systems in America did something that few public servants are willing to do. By any reasonable measure, my friend is a success. He called me the morning he took the test to say he was sure he hadn’t done well, but had to wait for the results. “I won’t beat around the bush,” he wrote in an email. He continued, “It seems to me something is seriously wrong. “I have a wide circle of friends in various professions. Here’s the clincher in what he wrote: There you have it. But maybe there’s hope. He’s wrong.

Fundamental Glossary For The Higgs Broadcast As everybody knows, next Tuesday we will be treated with a CERN webcast of the analysis results on the Higgs boson searches by ATLAS and CMS. I imagine many of you will want to tune in, but fear you will not grasp much given the typically technical jargon that physicists use to communicate the details of their analyses. So I thought I would provide here a very short glossary of terms you are likely to hear, and which you might have a hard time understanding correctly. Let me see if I can do a decent job. - gamma: a gamma-ray is a photon, i.e. a quantum of light. A very energetic one, to be sure: a gamma ray is such only if it carries significantly more energy than a x-ray, so above a Mega-electron-Volt or so. - VBF, or "vector-boson fusion": this is a process whereby the two protons (in the case of LHC collisions, but this is not specific to the VBF reaction) interact by both emitting a W, or a Z boson. - gluon fusion: this is the most common way of producing Higgs bosons.

Obama Critic Apologizes Now That She Has Cancer It’s a hard way to learn a lesson about administration policy, but for one California woman, the experience has literally been lifesaving. In a letter to the L.A. Times, California mother and artist Spike Dolomite Ward apologized to President Barack Obama, admitting that during his time in office she had gone quickly from supporter to opponent, believing that the president had done nothing to help the country since being elected. But like many Americans, especially the self-employed, Ward and her family eventually found themselves in a personal budget crunch where they could either pay their mortgage or pay their health insurance premiums, but not both. The choice at the time seemed obvious — keep their home. Then she found out she had cancer. Ward was able to use the Obama health care reform laws to get access to affordable insurance without being turned down because of her condition.

Oregon | Cannon gets the connection between reading and crime right We’ve haven’t seen much of former Rep. Ben Cannon down in Salem since he accepted a position as Gov. John Kitzhaber’s main education adviser. So when his name popped up in a recent Portland Monthly article, we paid special attention. In the article, he helps talk up the state’s new approach to K-12 education, which focuses, in part, on specific benchmarks in a child’s education that research shows are reliable predictors of future success. "If we raise the number of third-graders who read at a third-grade level, we affect everything, from graduation rates to incarceration rates," Cannon told the magazine. Somewhere in the back of our heads, we’d remembered hearing a claim not unlike this one -- we also remembered hearing it wasn’t true. We started with a basic Google search and came across the claim we’d kept hearing: Prison officials use third grade reading scores to predict the number of beds they’ll need. Even so, he said, the third-grade benchmark is an important one.

Why I ditched Buddhism For a 2,500-year-old religion, Buddhism seems remarkably compatible with our scientifically oriented culture, which may explain its surging popularity here in America. Over the last 15 years, the number of Buddhist centers in the United States has more than doubled, to well over 1,000. As many as 4 million Americans now practice Buddhism, surpassing the total of Episcopalians. Of these Buddhists, half have post-graduate degrees, according to one survey. Four years ago, I joined a Buddhist meditation class and began talking to (and reading books by) intellectuals sympathetic to Buddhism. For many, a chief selling point of Buddhism is its supposed de-emphasis of supernatural notions such as immortal souls and God. Western Buddhists usually downplay these supernatural elements, insisting that Buddhism isn't so much a religion as a practical method for achieving happiness. The insights imputed to meditation are questionable, too.

Frustration with Congress Could Hurt Republican Incumbents GOP Base Critical of Party's Washington Leadership Overview Public discontent with Congress has reached record levels, and the implications for incumbents in next year’s elections could be stark. Two-in-three voters say most members of Congress should be voted out of office in 2012 – the highest on record. And the number who say their own member should be replaced matches the all-time high recorded in 2010, when fully 58 members of Congress lost reelection bids – the most in any election since 1948. The Republican Party is taking more of the blame than the Democrats for a do-nothing Congress. To be sure, neither party’s leadership is viewed positively right now. The latest national survey by the Pew Research Center for the People & the Press, conducted Dec. 7-11, 2011 among 1,521 adults, finds that Republicans are as eager to see big changes in Congress as they were two years ago. Yet independents have few positive things to say about the Democratic Party either. the summer.

Cascadia Now! Khan Academy Blends Its YouTube Approach With Classrooms But what makes Mr. Khan’s venture stand out is that the lessons and software tools are entirely free — available to anyone with access to a reasonably fast Internet connection. “The core of our mission is to give material to people who need it,” Mr. For now, Mr. Photo It is too early to know whether the Khan Academy software makes a real difference in learning. Mr. “Instead of showing our students a better lecture, let’s get them doing something better than lecture,” Frank Noschese, a high school physics teacher in Cross River, N.Y., wrote on his blog in June. But in education circles, Mr. And a New York-based luxury real estate company credited Mr. “What Khan represents is a model that’s tapped into the desire that everyone has to personalize the learning experience and get it cheap and quick,” said Jim Shelton, assistant deputy secretary for innovation and improvement at the Education Department. Mr. Mr. Math became his passion. That is where the machine came in handy. Ms. Ms.

Time magazine reveals Person of the Year 2011 - Today Celebrates 2011 Time magazine revealed the 2011 choice for its iconic Person of the Year cover live on TODAY Wednesday. The Protester is this year’s choice, managing editor Rick Stengel told Matt Lauer and Ann Curry. “There was a lot of consensus among our people,” Stengel told the TODAY anchors as he revealed the magazine’s cover. As it has for the past 84 years, the weekly newsmagazine selected the person (or sometimes group, or thing) that its editors deemed had the single greatest impact during the past year, for better or for worse. Time’s Person of the Year has been a perennial topic of year-end debate ever since aviator Charles Lindbergh was chosen the first Man of the Year back in 1927 (the title was amended to Person of the Year in 1999). Slideshow: Time Persons of the Year 1999-2013 (on this page) Other candidates Polled online earlier this week, hundreds of TODAY.com readers came up with many other nominees for 2011, including late Apple co-founder Steve Jobs, Rep.

The Surprising Truth Behind Tax Day: Where Your Taxes Go | Blog, Smart Charts This post first appeared at the Campaign for America’s Future blog, OurFuture.org. If you groan about tax day, you’re certainly not alone. But what if tax day was something we could be proud of as members of a democracy? Would you feel differently about paying taxes if you knew they were going to support public services that you, your family and your community rely on — such as public safety, roads and bridges, schools, health care, social services and national parks? Millions of Americans file their federal income tax returns in April each year with no idea what the government actually does with all that money. This is surprising, considering that individuals are our nation’s primary bill payers. Given how much taxpayers collectively contribute to our nation’s revenue stream, it goes without saying that we should be able to influence how the government spends that money. That’s why the National Priorities Project (NPP) has done the work for you.

It's the world's smallest steam engine - Technology & science - Innovation Shrinking an engine down to a tiny device capable of powering micromachines is no longer just a flight of fancy. The world's smallest steam engine combines a small plastic bead with lasers to replicate the same basic idea envisioned by inventor Robert Stirling almost 200 years ago. The tiny engine re-creates the working idea of the Stirling engine — a gas-filled cylinder that drives a piston with heated gas expansion or cooled gas contraction. Instead of a piston, a plastic bead floating in water has its motion controlled by two lasers: one laser changes intensity periodically to allow greater or lesser degrees of motion; the other laser switches on and off to heat or cool the water. "We've developed the world's smallest steam engine, or to be more precise the smallest Stirling engine, and found that the machine really does perform work," said Clemens Bechinger, a physicist at the University of Stuttgart and Fellow of the Max Planck Institute for Intelligent Systems in Germany.