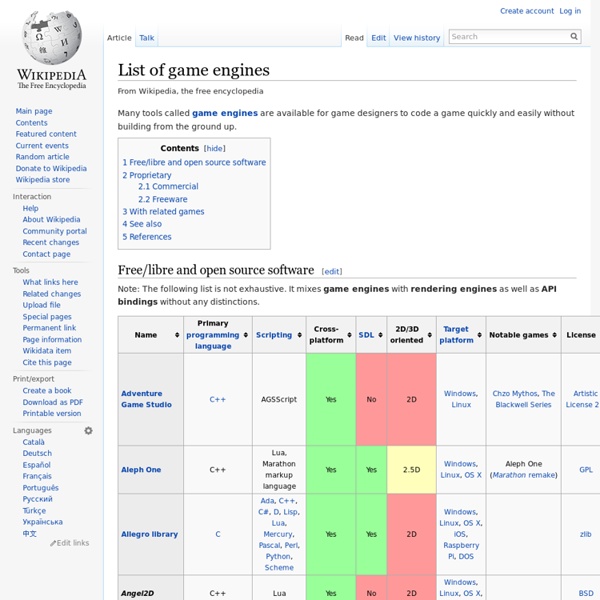 Many tools called game engines are available for game designers to code a game quickly and easily without building from the ground up. Free/libre and open source software[edit] Note: The following list is not exhaustive. It mixes game engines with rendering engines as well as API bindings without any distinctions. Proprietary[edit] Commercial[edit] Freeware[edit] These engines are available without monetary charge, but without the source code being available under an open-source license. With related games[edit] See also[edit] References[edit] Jump up ^ "blender.org - Installation Policy".

Software Needed for Making a Video Game" After designing the game's concept, as well as the characters and environments, the video game maker is ready for the computer work that will make it reality. There are many programs for making video games and software packages available to the novice and experienced game maker that allows them to bring their creations to life without heavy use of coding. These software packages instead perform many functions automatically, using common computer interface actions such as "drag and drop," highlighting and double clicking. Software packages for making video games generally include three categories: 3-D games, 2-D games and role-playing games. The 3-D software is more powerful than the 2-D, and role-playing game software is different all together.

Harvard Researchers Find A Creative Way To Make Incentives Work Incentives are all the rage: employee bonus pay, app badges, student grades, and even lunch with President Obama. Despite their widespread use, most research finds that incentives are terrible at improving performance in the long-run on anything but mindless rote tasks, because the fixation on prizes clouds our creative thinking (video explanation below). However, a new Harvard study of teachers found that a novel approach to incentives could dramatically improve student performance: give teachers a reward upfront and threaten to take it away if performance doesn’t actually improve. Exploiting the so-called “loss-aversion” tendency could open the door to creative incentivizing for software designers and managers. Harvard University’s Ronald Fryer and his colleagues explain that, in education, pay-for-performance has a dismal record of improving student outcomes.

Game Engines A game engine is the core library functions used in a game, usually related to graphics, input, sound, networking and other systems. Engines are separate from game-specific code, which enables different games to use the same engine. (Games of different genres even, in some cases.) Engines have different features. When picking an engine, you have to pay attention to whether or not it satisfies the needs of your game. 5 tips for making great animations for 2D games In this era dominated by 3D games, when even the latest versions of Street Fighter and Super Mario Bros. are made up of polygonized characters, quality sprite-based 2D games are rare. Many now consider the process behind making beautifully animated productions like Metal Slug or Aladdin to be a lost art, forgotten and undervalued as developers chased the excitement and economy of 3D graphics. But there are still a handful of gorgeous sprite-based games that release every once in a blue moon, and a few have had the fingerprints of animator Paul Robertson all over them, like Ubisoft Montreal's highly-regarded Scott Pilgrim vs. the World: The Game. Robertson's style is immediately recognizable, featuring short and stocky figures that look like River City Ransom characters brought up to modern standards, with much more detail and personality packed into each frame. "I just try to make the most awesome and ridiculous thing I can think of," explains Robertson.

Welcome to Flow in Games Abstract | Introduction | Foundation | Design Flow in Games | Implement Flow in Games | Conclusion | Bibliography Abstract This thesis provides a unique game design methodology to realize player-centric Dynamic Difficulty Adjustment (DDA) in video games, which creates optimized video game experiences for different types of players. Turbulenz - Developers The SDK contains everything a developer needs to rapidly get their project going, polished and deployed, including: A complete version of the JavaScript Engine code is available for developers to browse and use during debugging. The Engine is completely modular allowing developers to select exactly what features they want to use, and modify or replace anything that isn't suitable for their game. The SDK includes a wide range of feature and code samples. The aim of these samples is to cleanly demonstrate to developers how to use all the different parts of the game engine. All of the code is fully documented and explained, and suitable to paste into your own project as a starting point for getting a new feature implemented.

What developers can learn from that Night Trap Kickstarter When Night Trap co-creator Tom Zito launched a Kickstarter campaign earlier this month to fund development of a high-definition remake called Night Trap ReVamped, we had a lot of questions about the project. So did many members of the game industry: developers and journalists alike (including former Gamasutra editor Frank Cifaldi) quickly began voicing concerns about whether Night Trap, LLC -- the company under whose aegis Zito launched the Kickstarter -- might be fleecing its backers. To learn more about the project, Gamasutra spoke to some of the people involved -- including Zito and his fellow Night Trap co-creator Rob Fulop. GAMEFUL, a Secret HQ for Worldchanging Game Developers by Jane McGonigal As a planet, we spend 3 billion hours a week playing computer and videogames. That’s a LOT of time -- enough to change our lives, and probably save the world (the real world) while we’re at it. That's why we want to create a secret HQ for people who are making games that are making us: - happier - smarter - stronger - healthier - more collaborative - more creative - better connected to our friends and family - and better at WHATEVER we love to do when we’re not playing games Here are some games that are already doing just that: EVOKE, Fold It!

Wintermute Engine » features Wintermute Engine is literally packed with various features to provide the game developers with as much flexibility as possible. The feature list below is in no way complete; If you are interested in game development, we recommend that you download the development kit, check the enclosed documentation, experiment with the example projects and visit our forum. Resolution and colors The engine supports virtually any resolution. Your games may range from 320×200 retro-style to high-res 1024×768 (and more) modern looking ones. Both 16bit (hicolor) and 32bit (true color) color depths are supported.