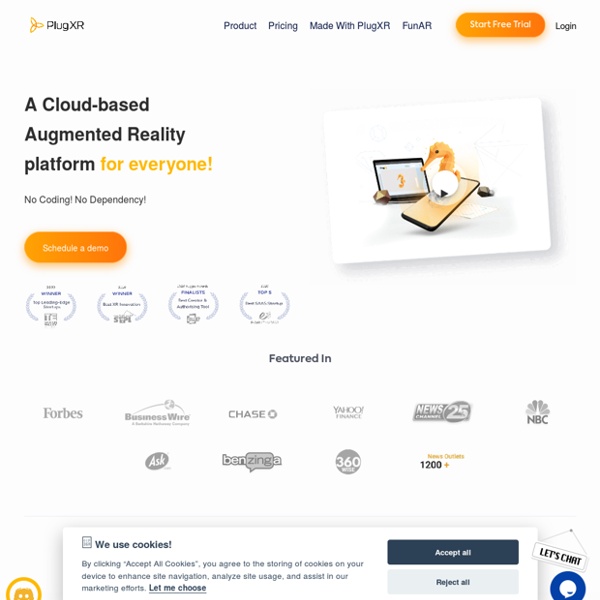 Best Open Source Augmented Reality SDKs of 2020 Augmented Reality is the new trending word in the digital world. It is indeed very difficult to find someone who has hardly heard of this technology. There are many industries like education, healthcare, e-commerce, etc.that have already implemented AR. It is to be believed that by 2021 augmented and virtual reality market will increase by $108 billion. The AR market is growing very rapidly and it is very huge. Creating Digital Breakouts Using ThingLink 360/VR Last June, I wrote a post about my ‘Escape the Classroom‘ first attempt at a digital breakout. After that 360° ThingLink received some attention, I collaborated with Susan Oxnevad, Director of Education at ThingLink, to offer a webinar on utilising this feature for teachers to create their own (read the posting on the ThingLink for Education Blog). The webinar took place on Tuesday, February 28. Below is the Google Slide presentation from the webinar as well as a video recording. Create a Lock with a Google Form

Real Uses of Virtual Reality in Education: How Schools are Using VR I'm attending UB Tech 2017 as I write this. Over the last few days, I've been enjoying lot of great breakout sessions, some good keynotes, learning about new and evolving offerings from vendors, and of course, meeting new colleagues and networking. Yesterday I attending a session titled, “Real Applications of Virtual and Augmented Reality in Education”, delivered by Ben Fineman. Fineman is the NET+ Program Manager for Internet2, where he helps to manage Internet2's portfolio of cloud based video, voice, and collaboration solutions. Augmented Reality in Education: The Hottest EdTech Trend and How to Apply It to Your Business The article was updated on August 04, 2020. Traditional methods of education as we know it are becoming a thing of the past. They are becoming increasingly digitized, and being driven by technology innovations. In fact, the so-called EdTech, the education technology industry, is expected to reach $680.1 billion by 2027, growing at an annual rate of 17.9%.

Best Augmented Reality Platforms in the market 2020 Augmented Reality has been a trending topic in software development circles for many years. AR showcases the real and physical world in which the elements are augmented by computer-generated input. It is a technology that overlays digital information like text, video, and sound onto the view of the real world. AR can be considered a great way to boost engagement and create realistic experiences with products. If the stats are to be believed, the demand for AR app will see a vast increase in the next three to five years. 25 Best Augmented Reality Apps (Some games like Pokemon Go) Augmented reality apps for kids and adults are a great way to connect your digital and real life. These apps vary from educational apps to games and even a digital advertising app created to make your outing more informational. For younger kids, augmented reality apps are more coloring based.

6 avantages et 5 exemples de réalité augmentée dans l'éducation Augmented reality in education is surging in popularity in schools worldwide. Through augmented reality (AR), educators are able to improve learning outcomes through increased engagement and interactivity. And that’s just for starters. AR even has some surprising advantages over virtual reality (VR). Here are a few ways AR benefits education… and then a few examples of how it has already worked. Web AR allows accessing web-based AR through a Web browser. There are millions of iOS and Android devices that provide great augmented reality experience. With the evolution of new technology, there are different ways that are explored to showcase augmented reality to the web platform. There are many mobile applications that have seen vast growth and success in Augmented Reality . But the support on the web has been very limited. Mobile AR is gaining amazing attention from people from different brands and businesses.

Putting AR into Art - Tech Trends A Viennese start-up is the first company from Austria to be accepted to Berkeley SkyDeck accelerator. Artivive recently beat over 600 competing entries to become the first Austrian start-up to join the Berkeley SkyDeck program (considered one of the top ten accelerator programs in the world). The latest six-month cycle begins in January and also includes a six-digit investment amount. Artivive supply a flexible tool for museums and artists which essentially allows them to integrate Augmented Reality into their existing content with minimal fuss. The aim, explains CEO Codin Popescu, was to give artists a quick and frictionless way to combine analogue and digital art. “For an artist to create in augmented reality they previously had to build their own isolated solutions, which required technical skills and resources, but now those artists can take visitors on a journey in time and explain what lies behind, enhance the art with illustrations or show how the artworks were made.