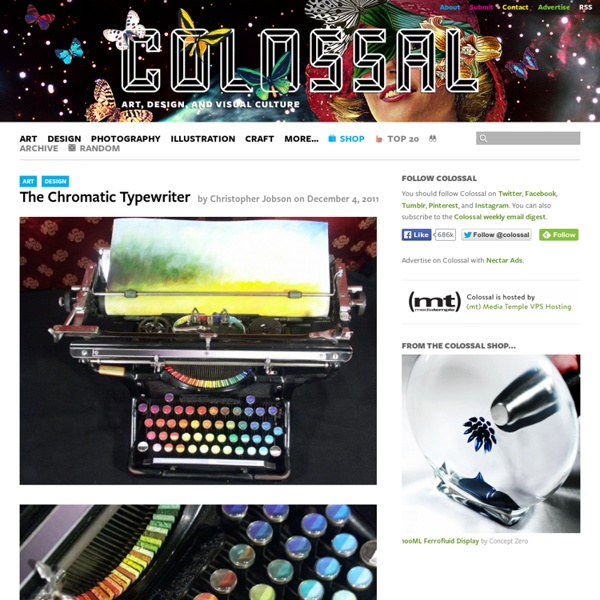 Washington-based painter Tyree Callahan modified a 1937 Underwood Standard typewriter, replacing the letters and keys with color pads and hued labels to create a functional “painting” device called the Chromatic Typewriter. Callahan submitted the beautiful typewriter as part of the 2012 West Prize competition, an annual art prize that’s determined by popular vote. I don’t know how practical painting an image with a color typewriter is, but if Keira Rathbone can do it… (via dark silence in suburbia)

THE COVETED — be stylish Many years ago, my husband and I were at the Vintage Fashion Expo, and while there I thought I would get the “perfect” leopard print coat. You know, that vintage leopard print coat every woman should have in her wardrobe. As I pulled out a leopard print coat which I thought would be the “one” my husband put his hand on my arm, and said, “Nooooooooo. Not that coat.” Another great invention, the Exhaust Air Jack This invention is pretty sweet. It basically uses the air from your exhaust to inflate a big bubble that is strong enough to hold up your car. Once it’s to the right height, just turn off your engine and change your tire. The bubble will stay inflated for hours (if you are really bad at changing a tire).

Tattoo Culture and Art Daily - StumbleUpon Posted on October 18, 2011 by lenny . Xoïl is a tattooer at Needles Side Tattoo in Thonon-les-Bains, France. Unique Steampunk Insects Since the late 1990′s style steampunk is becoming more and more popular, and not only in the literature. Various modern utilitarian objects have been modded by enthusiasts into a pseudo-Victorian mechanical “steampunk” style. And often this stylization gives very unexpected results. Like, for example, art works of american sculptor Mike Libby. His studio Insect Lab make robots from dried insects. Laptop sensation: Plantbook Have you ever spilled water on your laptop? Not a problem anymore! How about charging it with water?! Designer team Seunggi Baek a Hyerim Kim introducing Plantbook. Plantbook: design of the green future

Best Street Art of 2011 - StumbleUpon December 27, 2011 | 72 Comments » | Topics: Art, Pics Hot Stories From Around The Web Other Awesome Stories Къщата на хобитите в Уелс - StumbleUpon URGENT: Computer Backup Required Matt Folson - Microsoft Specialist Your computer has become slow, unresponsive, displaying errors, or has started experiencing other issues. These issues are often caused by Viruses, Malware, or improper maintenance of your system. Malware and Viruses can cause program lock-ups and crashes, unwanted pop-ups and ads, slow PC performance, system freezes, start-up and shutdown problems, error messages, and total system failure. To ensure your personal and financial information is not destroyed by Malware, Viruses, or other issues, it is highly recommended that you run a free PC backup program to save and protect your system.

30 Creative Ways to Repurpose & Reuse Old Stuff We all have stuff that no longer serves any purpose around the house, but we still have trouble getting rid of it. Either it’s “still OK”, or “might come in handy” or just holds some sentimental value to it. In extreme cases, this might lead to hoarding, but if you’re creative enough, you can solve the problem by repurposing, upcycling and reusing your old things. Besides serving a purpose (again), repurposed items add this lovely touch of creativity and coziness to the space. Heck, most of the time, upcycled things become even cooler than they originally were. [Read more...]

Steve Jobs dead: Biography of Apple visionary By Jennifer Madison Updated: 06:41 GMT, 6 October 2011 Visionary Apple Computer founder Steve Jobs has died, aged 56. Jobs, who co-founded the technology company in 1976 with childhood friend Steve Wozniak, has lost his eight year battle with pancreatic cancer, Apple confirmed this evening. The mastermind behind the iPhone, iPod and iMac, and dozens of other devices, Jobs is remembered for revolutionizing the way we communicate today. Visionary: Apple co-founder Steve Jobs waves at the conclusion of the launch of the iPad 2 on stage during an Apple event in San Francisco, California on March 2, 2011

Graphic Design Overglow – retrofuturistic logos Overglow is a project by Rome based designer Alessandro Strickner. » read more Let’s talk icons with Michael Flarup Create Something. - StumbleUpon Donate Login Remember Me Create An Account Forgot Password 2012: a bloody good year for extreme sports 2012 has been a pretty remarkable year for extreme sports and on top of the ‘lympics, a damn good one for sport in general at that. This ‘People are Awesome‘ style compilation picks out some of the key extreme sports achievements and events of the past year and we think it does a pretty stellar job of summing everything up. On the snowboarding front they’ve included 16 year old Yuki Kadono’s backside triple cork 1440 at the Beijing Air and Style and Travis Rice winning the Red Bull Supernatural. Good to see that they haven’t overlooked Tom Schaar’s first ever 1080 on a skateboard or Trevor Jacob’s first ever double cork/backflip either. Perhaps even more remarkable are some of the things that we somehow missed this year – we’re not quite sure how we failed to catch wind (excuse the pun) of Gary Connery’s parachute-less wingsuit landing. And let’s not forget that dude that practically dropped out of space, breaking world records and the sound barrier in the process.