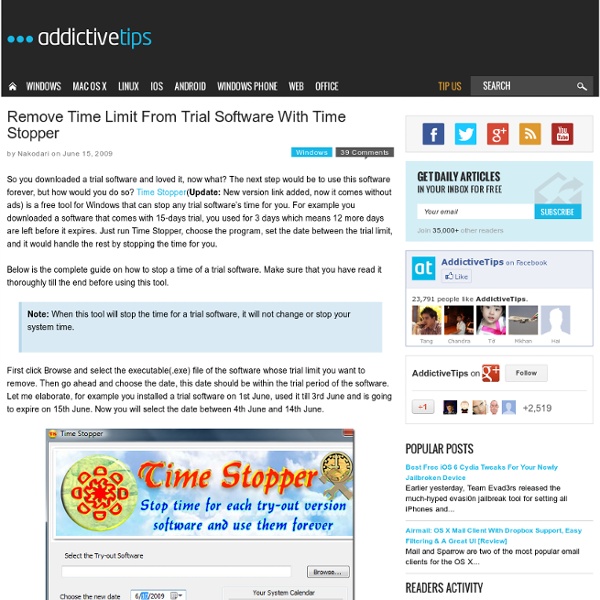 So you downloaded a trial software and loved it, now what? The next step would be to use this software forever, but how would you do so? Time Stopper(Update: New version link added, now it comes without ads) is a free tool for Windows that can stop any trial software’s time for you. For example you downloaded a software that comes with 15-days trial, you used for 3 days which means 12 more days are left before it expires. Just run Time Stopper, choose the program, set the date between the trial limit, and it would handle the rest by stopping the time for you. Below is the complete guide on how to stop a time of a trial software. Note: When this tool will stop the time for a trial software, it will not change or stop your system time. First click Browse and select the executable(.exe) file of the software whose trial limit you want to remove. On the right side of the screen you will be shown a system calendar so that you can know what date is today. Advertisement Related:  For GEEKS

wiseGEEK: clear answers for common questions Change Your Wi-Fi Router Channel to Optimize Your Wireless Signal If you live in an apartment complex you’ve probably noticed more than just the passive-aggressive network IDs that your neighbors use—very likely you’ve had problems with your wireless connections dropping out, or just not being as fast as you’d like. Here’s a quick fix. Of course, this isn’t the only thing you need to do to make sure your wireless network is running at maximum speed, but for today’s lesson we’ll show you how to pick the right channel to make sure you can stream the new Futurama episode to your laptop without skipping. Note: if your Wireless network is working fine, please don’t mess with it. Or at least, don’t blame us if you break it. Figuring Out the Right Wi-Fi Channel Note: the latest version of this utility is not free anymore, but we’ve linked to a download site that provides the free version still. Let’s take a closer look at that window… you’ll need to choose the right channel band, depending on the router you are using. Change Your Wireless Channel

64 Things Every Geek Should Know - LaptopLogic.com The term ‘geek’, once used to label a circus freak, has morphed in meaning over the years. What was once an unusual profession transferred into a word indicating social awkwardness. As time has gone on, the word has yet again morphed to indicate a new type of individual: someone who is obsessive over one (or more) particular subjects, whether it be science, photography, electronics, computers, media, or any other field. A geek is one who isn’t satisfied knowing only the surface facts, but instead has a visceral desire to learn everything possible about a particular subject. A techie geek is usually one who knows a little about everything, and is thus the person family and friends turn to whenever they have a question. 1. USB – Universal Serial Bus GPU – Graphics Processing Unit CPU – Central Processing Unit SATA – Serial ATA HTML – Hyper-text Markup Language HTTP – Hypertext Transfer Protocol FTP – File Transfer Protocol P2P – Person to Person data sharing 2. 3. Here’s what one looks like: 4.

100+ Sites to Download All Sorts of Things - StumbleUpon These days you can find all sorts of things online, from audio books to flash files, from sound effects to CSS templates. Below we compiled a list with over 100 download sites that serve that purpose. We will also try to keep the list updated, so if your favorite download site is not here, let us know about it with a comment. Audio Books Librivox: One of the most popular audio libraries on the web. Podiobooks: Similar to podcast, Podiobooks are serialized audiobooks that are distributed through RSS feeds. Oculture (Audio & Podcast): Offers a rich array of educational and cultural media. Learn Out Loud: A one-stop destination for video and audio learning resources. BitTorrent The Pirate Bay: The web’s largest collection of bit torrent trackers. Mininova.org : What started as an alternative to the now defunct Supernova that went offline in 2004, Mininova has become the biggest torrent search engine and directory on the web. Books and Documents eBooks Ebookee: A free book search engine. Clipart

5 common computer problems you can fix yourself FoxNews.com / Jeremy A. Kaplan Dec. 22, 2012: Citing violent video games such as "Kindergarten Killers," seen on a screen over his shoulder, NRA chief Wayne LaPierre addresses the nation following a massacre in Connecticut.FoxNews.com Computers always act up at the worst times. Often, users get so frustrated that they needlessly go out and buy a new computer or pay for a computer repair. 1. Computers slow down over time -- that's normal. If your PC is fairly new and it's slow, remove the pre-installed programs, or bloatware, that came with it. To give an older PC a speed boost, break out the CCleaner. Grab Duplicate Cleaner to remove duplicate files that might be clogging up the system. In your cleaning process, you might find programs you no longer need. 2. Thankfully, Windows' dreaded "Blue Screen of Death" is getting to be a rare event, but it still occurs. The problem can often be traced to bad memory modules. It's not difficult to remove and install memory modules. 3. 4. 5.

Intense PC - World's First Ivybridge Core i7 Fanless Mini Computer Back in March we announced the Intense PC, the latest addition to our Fit-PC family and our most powerful fanless computer to date using 2nd Generation i3 and i7 cores. Well now, only a few days after Intel itself announced availability of its 3rd Generation Core i7 IVYBRIDGE processors, we can confirm that Intense PC is the world’s first, low power, miniature, fanless computer to ship with an i7 Ivybridge option! Orders are being taken immediately. Already a powerful performer, the Intense PC has now been treated to a third generation Intel Core i7-3517UE processor running at 1.7 GHz. Several FACE modules have since been designed to extend functionality as and when needed, including one that offers more Gigabit Ethernet ports and another that makes another two mini-PCIe slots available. The new Ivybridge Intense PC model is available immediately, with a barebone third gen Core i7 version (no RAM or HDD) and one with 8GB of system memory and a 500 GB hard drive (running on Linux) .

Five Things You Should Know to Keep the Man from Snooping on Your Digital Stuff "Think of it it like leaving your doors and windows open and complaining when someone looks inside." I find this to be an iffy comparison. I understand what you guys are trying to explain but it misrepresents the problem. It largely depends on what the guy accessed or not. If he saw it was open and decided to take a look and didn't delve into any emails, send any or whatever then sure, I can live with that, if he merely just looked at the page that was already being displayed. But if he went inside individual emails, started reading them etc, I find that should be comparable to going into someone's mailbox and opening up the letters, which is a federal crime. To go with the comparison used in the article, I think it's better compared to leaving your windows and doors open and having a guy come in uninvited and take a look at everything, opening up your drawers and your fridge and what have you.

The UK and Huawei, Theresa May and the leaking scapegoat This week, the news broke that Defense Secretary Gavin Williamson had been identified as the source of a leak from the National Security Council, and had been fired from the government. The BBC reported on Theresa May’s decision to axe her Defense Secretary of 18 months having found “compelling evidence suggesting [his] responsibility for the unauthorized disclosure.” Subsequent to his sacking, and facing calls for a full inquiry into what happened, the Prime Minister’s de facto deputy, David Lidington, has said “the PM considered the matter closed.” But this matter is far from closed. Mr Williamson denies that he leaked anything, and said in his response letter to the PM, “I strenuously deny that I was in any way involved in this leak and I am confident that a thorough and formal inquiry would have vindicated my position.” He continued, “I have always trusted my civil servants, military advisers and staff. This is a situation that needs some close examination. Gavin Williamson

The absurdly simple guide to backing up your PC The first rule of PC Club is: Always, always back up. Thankfully, backing up your most important data is a cinch. It’s the getting off your rear to actually do it that stymies most people, myself included. We’ll discuss emotional motivation later. (You’ll laugh! The options Method A: Fork over the $50 to $100 a year and back up the data from all your PCs and mobile devices to an online storage service such as Carbonite, Google Drive, iDrive, iCloud, Mozy, or SkyDrive. Of course, this method works only if you have regular access to enough upstream bandwidth to handle all your essential data. Method B: Consolidate the data from your mobile devices onto your primary computer. Using Method A, Method B, or a combination of both will protect 99 percent of PCs 99 percent of the time, though it’s worth noting that local backups restore far more quickly. You can stop reading now—unless, of course, you’re a seeker of the perfect backup plan, or you want some practical advice. The platinum rule

Zen 2 might not offer the IPC increase you expect Opinion: Across all sorts of tech forums, and particularly in TechSpot’s comment section, I’ve noticed a trend. Everyone loves to quote a 10-20% IPC (instructions per clock) boost for Zen 2, and, while I’m not ruling that out, I think it’s much less likely than what many people believe. That range has only come about because of a series of misunderstandings, errors, and easily refutable leaks, so I’m going to try to set the record straight. Rumors kicked off six months ago when an Italian computer company with a 32-core Epyc sample told Bits and Chips that Zen 2 offered a 13% IPC performance boost in scientific tasks. For starters, scientific tasks benchmark wildly differently to games – AMD already beats Intel in scientific and productivity IPC, while falling ~3% behind in games clock for clock. More importantly, using a 32-core server processor as a metric for an 8-core consumer processor is fraught with error. I believe that a 10-20% increase is possible, but only as likely as 5-10%.