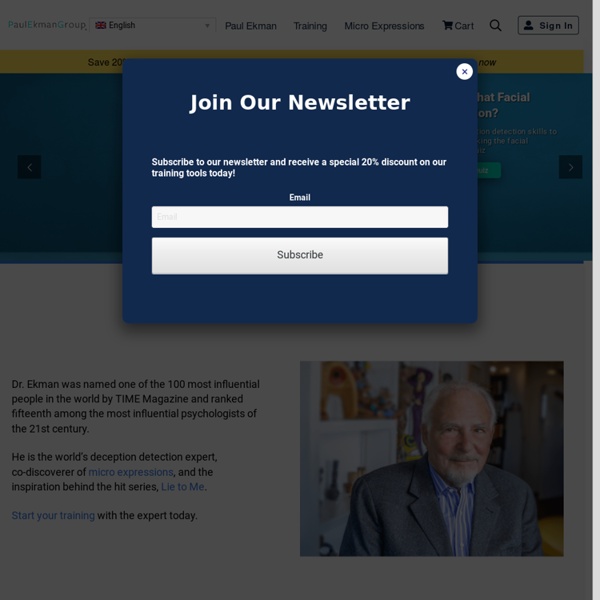 Dr. Paul Ekman's Column; CAVEAT: How the Lightman Group spots lies is largely based on findings from my research. Because it is a drama not a documentary, Dr. Lightman is not as tentative about interpreting behavior as I am. Lies are uncovered more quickly and with more certainty than it happens in reality.

Social Neuroscience Laboratory: Research Research Interests Developmental neurobiology and genetics of social behaviors, including social affiliative and aggressive behaviors, in mouse models relevant to autism and schizophrenia spectrum disorders. Research Summary MSNBC - How to Think About the Mind How to Think About the MindNeuroscience shows that the 'soul' is the activity of the brain Sept. 27 issue - Every evening our eyes tell us that the sun sets, while we know that, in fact, the Earth is turning us away from it. Astronomy taught us centuries ago that common sense is not a reliable guide to reality. Today it is neuroscience that is forcing us to readjust our intuitions. People naturally believe in the Ghost in the Machine: that we have bodies made of matter and spirits made of an ethereal something.

Theory of Social Intelligence What is Social Intelligence (SI)? Social Intelligence (SI) is the ability to get along well with others, and to get them to cooperate with you. Sometimes referred to simplistically as "people skills," SI includes an awareness of situations and the social dynamics that govern them, and a knowledge of interaction styles and strategies that can help a person achieve his or her objectives in dealing with others. It also involves a certain amount of self-insight and a consciousness of one's own perceptions and reaction patterns. From the standpoint of interpersonal skills, Karl Albrecht classifies behavior toward others as falling somewhere on a spectrum between "toxic" effect and "nourishing" effect. Irvin D. Yalom, M.D. Professor Emeritus of Psychiatry, Stanford University

Genetic Link Between Physical Pain And Social Rejection Found UCLA psychologists have determined for the first time that a gene linked with physical pain sensitivity is associated with social pain sensitivity as well. Their study indicates that variation in the mu-opioid receptor gene (OPRM1), often associated with physical pain, is related to how much social pain a person feels in response to social rejection. People with a rare form of the gene are more sensitive to rejection and experience more brain evidence of distress in response to rejection than those with the more common form. The research was published Aug. 14 in the early online edition of Proceedings of the National Academy of Sciences and will appear in the print version in the coming weeks.

zenhabits All of the Memes: Internet Memes Come to College Campuses There’s a new phenomenon that’s invading college campuses across the country . It is capturing the minds and study time of the college population. The Internet Meme has finally come to campus. If you’re a current student at Syracuse University, you’ve more than likely stumbled upon the SU Memes Facebook page by now.

Related:
Related:  Emociones   -  Emociones/Mente   -  Excerpts from "How to be Perfect" by Ron Padgett | The Writer's Almanac with Garrison Keillor