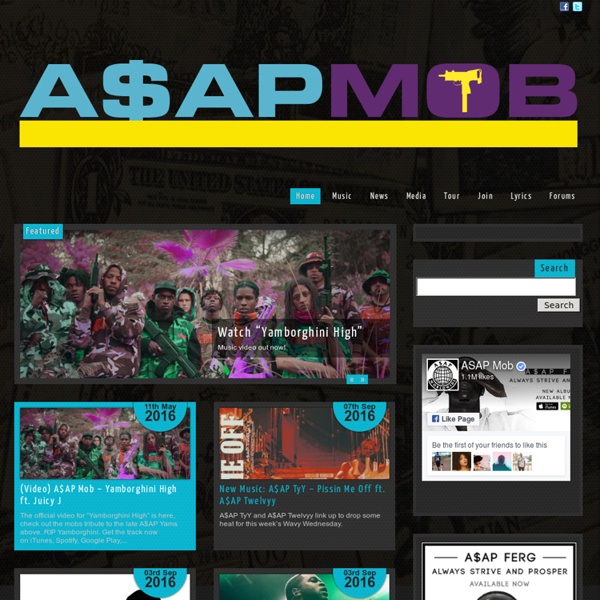 MF Doom Early life[edit] Dumile was born in 1971, in London, England, the son of a Trinidadian mother and a Zimbabwean father with an older brother Markham Temple, whom he often gives much credit for many of his accomplishments.[1] He moved with his family to New York and was raised in Long Island, New York. Music career[edit] 1988–1993: Career beginnings[edit] 1997–2001: Operation Doomsday[edit] duhamel.smile Denise Duhamel: Smile! Copyright © 1993 by Denise Duhamel All rights reserved For permission to reprint contact the author at Denise.Duhamel@fiu.edu. for Nick

8 Reasons People Of Color MUST Rally For A Long Overdue “White History Month” White people have suffered for too long. By my count, at least the last ten years. That can feel like a hell of a long time when you’ve not had to deal with anybody criticizing or trying to share your power with you for most of your life. ThemeAddict: WWE The Music, Vol. 6 ThemeAddict: WWE The Music, Vol. 6[2][3] is a compilation album released by WWE in 2004. It mostly features recent theme songs of wrestlers on the roster at the time. The album reached a peak of #38 on the Billboard 200[4] and #2 Billboard Top Soundtracks chart.[4] Track listing[edit] Notes[edit]

Natural Homemade Shampoo- Easy Recipe I’ve made natural alternatives to most of our household products and toiletry product, but shampoo was by far the toughest. I tried the “no-poo” method, which has great results for some, but did not work on me at all (and I have some terrible Christmas pictures to prove it!). If you have coarse hair that isn’t naturally oily, this method may be great for you! I have baby-fine hair and it didn’t work for me. Debra Antney Debra Antney is the founder and CEO of Atlanta-based management company "Mizay Entertainment" (home to Gucci Mane, Waka Flocka, OJ Da Juiceman, and French Montana[1]). She is also Waka's mother. On November 19, 2013, it was revealed Gucci Mane had filed a lawsuit against Waka Flocka Flame, Antney, OJ Da Juiceman, rapper Khia Stone and producer Zaytoven. The lawsuit accuses the parties, of fraud, racketeering, and breach of contract.

Day By Day Entertainment InfinitEvol Brooklyn based veteran EM-CEE hailing from the Bronx. At the age of 38 years young, Infinit has worked closely with the likes of Akhe Abdullah, CX KiDTRONiK, Shane West, Monster Island Czars (M.I.C), and hip-hop legend MF GRIMM. Infinit’s skillset is not limited to strictly rapping; Infinit is also an Inventor, Artist, Product Developer, Manufacturer, Comic Writer, and Producer. Infinit has conceptually designed and manufactured everything contained in his latest project, MEGATRON, which will be released this summer 2013.

Jean Grae Jean Grae (born Tsidi Ibrahim,[1][2] November 26, 1976), formerly known as What? What?, is an American hip-hop artist. She rose to prominence in the underground hip-hop scene in New York City and has since built an international fanbase. Early life[edit]

FannyPack For the clothing accessory, see Fanny pack. FannyPack was a New York City-based electronic/hip hop group that was formed in 2002 by music producers Matt Goias and "Fancy". The band featured vocals by Jessibel Suthiwong, Belinda Lovell, and Cat Hartwell.