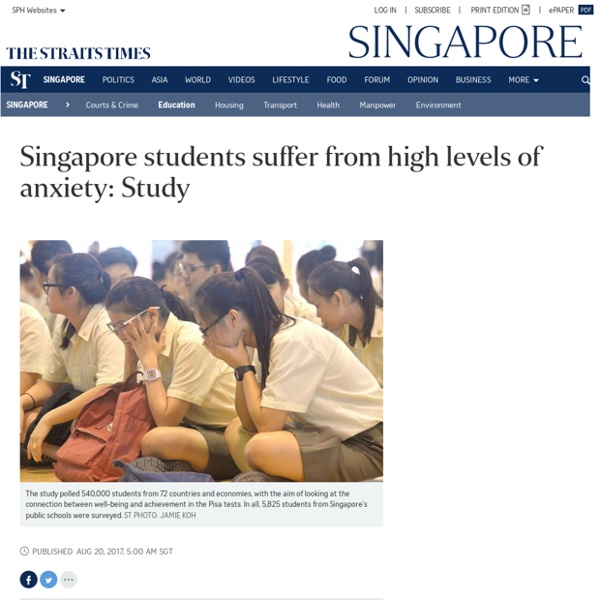 Singapore students may be topping the charts in mathematics, science and reading, but it is exacting a heavy emotional price on them. An international study suggests that Singapore students, known worldwide for academic excellence, also experience high levels of anxiety and have been exposed to bullying. The findings emerged in a study by the Organisation for Economic Cooperation and Development (OECD), which conducts the triennial tests called the Programme for International Student Assessment (Pisa). The study polled 540,000 students from 72 countries and economies to look at the connection between well-being and achievement in the Pisa tests. One question that the 5,825 Singapore students who were polled did not have to answer was on how satisfied they were with life, but their responses to the other questions revealed that most were anxious about tests and grades. It emerged that their anxiety levels were significantly higher than the OECD average for all five questions.

Related:  Stress faced by Undergraduates • An introduction to Stress

Too much, too young: Singapore schoolchildren's struggles with stress Schoolchildren are paying a heavy price for Singapore's success in global education rankings, with rising numbers seeking psychiatric help as they struggle to cope with the relentless pressure for academic excellence. Children are reporting symptoms of anxiety and stress related to school as early as primary school, experts warn, and there have been extreme cases where pupils have been driven to suicide. Youths often face long days at school, hours of homework, and are then pushed by parents to have private tuition, which is having an impact on mental well-being - a recent report found that overall the city's pupils reported higher levels of anxiety than average. Now, in a bid to reduce stress in its schools, Singapore is embarking upon reforms that will scrap some academic tests, and change the rigid streaming process. "We have to balance the joy of learning and the rigour of education," Ong Ye, education minister said, as he announced some of the changes in parliament earlier this year.

Teen fought with others and wanted to kill herself, Health News When she was in Primary 5, Olivia (not her real name) fought with her classmate and, in a fit of anger, injured the latter's back. "My parents were shocked. They thought I was gentle," she said. But the fights continued. She bullied her classmates, threw chairs at her teachers and clashed with her mother at home.

More teens in Singapore seeking help at IMH for school stress SINGAPORE (THE NEW PAPER) - More teenagers from top schools are seeking help at the Institute of Mental Health (IMH) for school-related stress. IMH said that stress-related, anxiety and depressive disorders are common conditions seen at its Child Guidance Clinics, which treat children aged six to 18. The clinics saw an average of about 2,400 new cases every year from 2012 to 2017. Death of boy, 11, who fell 17 floors after failing his exams for the first time ruled a suicide, Courts & Crime News SINGAPORE - The death of an 11-year-old boy, who fell 17 floors from his bedroom window on the day he was to show his parents his mid-year examination results, was found to be "a deliberate act of suicide" on Friday (Oct 21). In his findings, State Coroner Marvin Bay urged parents and educators to remind children that "their efforts in study may not always yield a commensurate result, and also that such failures are transient or temporary events". He added: "Parents and educators should also constantly reassure them that they will always be there to help the child through each stumble, winding turn and setback in their education journey." The boy, referred as Master H, was a Primary 5 pupil who had never failed in any of his subjects.

Academic Stress and its Sources Among University Students Reddy K. J, Menon K. R, Thattil A. More children and teens are stressed out, Health News Last year, a Primary 5 pupil fell 17 floors from his bedroom window on the day he was supposed to take his exam papers home. He had never fared poorly in his examinations from Primary 1 to 4, and scored an average of 70 marks. His mother would cane him on his palm "lightly" for every mark he fell short of her stipulated standard of 70 per cent. But he failed his Higher Chinese and mathematics in his latest mid-year exam.

Impact of Stress on Students in Secondary School or Higher Education Methods A single author (MP) searched PubMed and Google Scholar for peer-reviewed articles published at any time in English. Search terms included academic, school, university, stress, mental health, depression, anxiety, youth, young people, resilience, stress management, stress education, substance use, sleep, drop-out, physical health with a combination of any and/or all of the preceding terms. A snowball strategy allowed for examination of references in identified articles, and inclusion of additional articles as appropriate. The author reviewed all potential articles for inclusion.

High Stress Teens Twice as Likely to Drink or Use Drugs Why do some teens get involved in substance abuse while others do not? What factors or influences increase the risks that adolescents will smoke cigarettes, drink alcohol, get drunk and use illegal and prescription drugs, while others go all the way through high school abstinent? To answer these questions, The National Center on Addiction and Substance Abuse (CASA) at Columbia University conducts a "back-to-school" study otherwise known as "The National Survey of American Attitudes on Substance Abuse." Since 1995, this survey has attempted to identify characteristics, situations, and circumstances that increase or decrease the likelihood of teen substance abuse. From the results of several of CASA's 17 published studies, the following risk factors for increased likelihood that teens will smoke, drink or use drugs have emerged.

Institute of Mental Health (IMH) Everybody has it, and everybody talks about it, but nobody really knows what stress is. WHY? It is because stress means different thing for each of us, and is also different for each of us. Manage your stress and become more productive rather than self-destructive. Stress is a part of modern living.

Related:
Related:  Stress faced by Undergraduates   -  An introduction to Stress