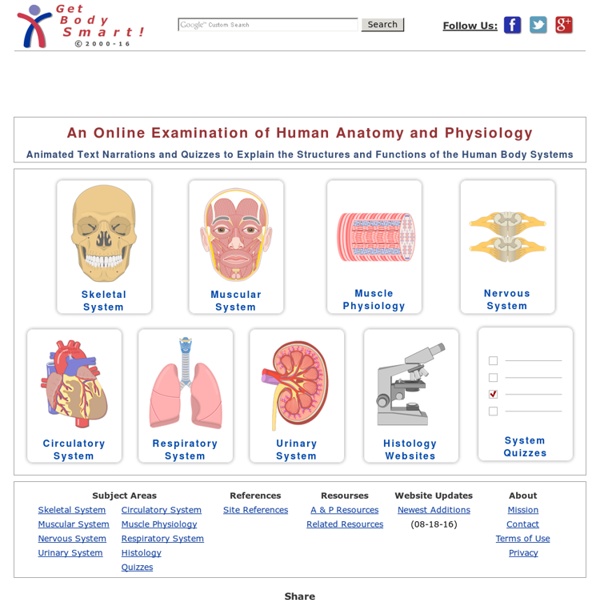 The Biology Corner This worksheet provides steps for identifying structures of the grasshopper, with a focus on the external anatomy and mouthparts. The lesson can be part of a larger unit on insects … In animals, form and function are closely related.

What would disprove evolution? If evolution is a scientific theory worth its salt, then there must be some conceivable observations that could show it to be wrong. I just wanted to put down, for the record, what some of those observations might be. First, let’s reprise what I see as the major components of the theory of evolution. Evolution occurs, that is, there is gene frequency change in populations over generations.Significant evolution takes time—that is, it usually (though not always) requires hundreds to thousands of generations to occur.

Zygote Body - Interactive Human Body Browser for your Whiteboard Biologists who wanted a human body browser in the same style as Google Earth, Google Sky, Google Moon etc got very excited a few years ago when Google brought out its Body Browser. They then got sad when Google retired it. Well it looks like it’s back (sort of) under new management and is now called Zygote Body. Anatomy Labs - OnlineLabs.in - Virtual laboratory simulations for science education Below is a list of freely available online anatomy, physiology and virtual dissection lab resources. Get Body Smart – An online examination of human anatomy and physiologyHuman Body & Mind – From the BBCVirtual AutopsyFroguts! – Virtual frog dissection and labsVirtual Frog Dissection Kit – From Berkeley LabVirtual Cat Dissection – From Penn State UniversityVirtual Pig Dissection – From Whitman CollegeVirtual Owl Pellet Dissection – From KidWingsJayDoc HistoWeb – From the University of Kansas Medical Center. A histology atlas that corresponds with the laboratory exercises of the Cell & Tissue Biology courseThe Interactive Library – This EdInformatics.com site is a list of links to interactive biology sites. Some Java applets are standalone and some come with lesson plans and notes

The brain is actually wired like a chess board and a new scanner reveals how in stunning detail By Ted Thornhill Published: 10:04 GMT, 30 March 2012 | Updated: 15:31 GMT, 30 March 2012 For a long time it was thought that the brain was a mass of tangled wires, but researchers recently found that its fibers are actually set up like a chess board, crossing at right-angles. What’s more, this grid structure has now been revealed in amazing detail as part of a brain imaging study by a new state-of-the-art magnetic resonance imaging (MRI) scanner. Van Wedeen, of Massachusetts General Hospital (MGH), who led study, said: ‘Far from being just a tangle of wires, the brain's connections turn out to be more like ribbon cables - folding 2D sheets of parallel neuronal fibers that cross paths at right angles, like the warp and weft of a fabric.

Ten Recent Advances in Evolution By Carl Zimmer Posted 10.26.09 NOVA To celebrate the 150th anniversary of the Origin of Species, here's a list—by no means exhaustive—of some of the biggest advances in evolutionary biology over the past decade. These advances include not just a better understanding of how this or that group of species first evolved, but insights into the evolutionary process itself. In some cases those insights would have given Darwin himself a pleasant jolt of surprise. Ten significant leaps forward in evolution research in the past decade, as chosen and described by noted science writer Carl Zimmer Enlarge Photo credit: (Earth) © NASA; (text) © WGBH Educational Foundation Earth - The making of me and you This story is part of BBC Earth's "Best of 2016" list, our greatest hits of the year. Browse the full list. • Bill Gates is actually worth $1,956• Canadian pop star Justin Bieber has five times fewer cells in his brain than in his liver• Top tennis player Serena Williams has 24.5 trillion red blood cells powering her body• Internet and social media pioneer Mark Zuckerberg’s body contains 800MB of data• President Barack Obama’s head rules his heart; his brain weighs 1.4kg, his heart just 0.4kg Welcome to The Making of Me and You, a unique, new digital interactive from BBC Earth that details extraordinary personalised facts. Just input your date of birth, sex at birth, height and weight, and choose the metric or imperial units that make most sense to you. And instantly find out:

How plants work - Science (4) - ABC Splash - Overview Plants are the only living things that can make their own food. They do this during the day while it's light, using a process called photosynthesis, which uses carbon dioxide and produces oxygen. During the day and night plants take in oxygen and release carbon dioxide through respiration. Discover just how important plants are to life on Earth. The Simulation News and Announcements The Human Brain Project to present at Swisstech Open Days Representatives of the Human Brain Project (HBP) will be presenting at the grand opening of the Swiss Tech Convention Center, at EPFL in Lausanne on the weekend of 5-6 April 2014. The presentation will consist of a global overview of the project, followed by a projection of the 3D HBP movie and a 10-minute Q&A session. This event will be open to the public.

educreations teacherswithapps Educreations Interactive Whiteboard, by Educreations, Inc, is an incredible, yes that’s right, INCREDIBLE app. This newly released app comes with the huge bonus of being FREE! We think this app has the edge needed to push education in the right direction and to begin modernizing teaching as we know it. Educreations is not the first app using the whiteboard concept, but it is the first one geared specifically for the classroom. Educreations wants to give teachers the opportunity to create what Sal Khan has been doing for years (read our review of Khan Academy). Log In Video The Times’s Quentin Hardy talks with Mary Roach about her new book, “Gulp: Adventures on the Alimentary Canal.” Overview | In this lesson, students research the digestive system in depth, and then create a detailed walk-through model to illustrate each compartment.Materials | Computers with Internet access, projection equipment, an assortment of art supplies (butcher paper, fabric, yarn, cardboard, colored paper, tissue paper, paints, markers, glue, staplers, tape, scissors, etc.) Warm-up | When students arrive, project “Gulp! The Quiz” at the front of the room.