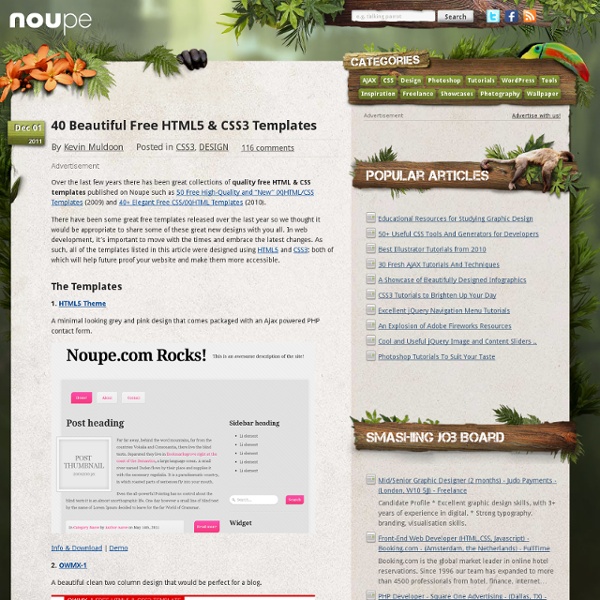 Dec 01 2011 Over the last few years there has been great collections of quality free HTML & CSS templates published on Noupe such as 50 Free High-Quality and “New” (X)HTML/CSS Templates (2009) and 40+ Elegant Free CSS/(X)HTML Templates (2010). There have been some great free templates released over the last year so we thought it would be appropriate to share some of these great new designs with you all. In web development, it’s important to move with the times and embrace the latest changes. As such, all of the templates listed in this article were designed using HTML5 and CSS3; both of which will help future proof your website and make them more accessible. The Templates 1. A minimal looking grey and pink design that comes packaged with an Ajax powered PHP contact form. Info & Download | Demo A beautiful clean two column design that would be perfect for a blog. Info & Download 3. A grunge styled website that is suitable for a portfolio or a blog. Info & Download | Demo 4. Info & Download | Demo

HTML5 Platformer: the complete port of the XNA game to <canvas> with EaselJS - David Rousset After a couple of hours coding with JavaScript, I’ve finally finished porting the XNA 4.0 Platformer game sample to HTML5/Canvas with the help of the EaselJS gaming framework. This article will provide you the game and the story of some of the questions I’ve asked myself while coding it. If you’d like to know how the game works, simply read the JavaScript commented code available at the end of this article.

10 of the Best CSS3 Code Generators This article was written in 2011 and remains one of our most popular posts. If you’re keen to learn more about CSS3, you may find this recent article on transform techniques of great interest. I have rose-tinted memories of CSS2.1. Rounded corners may have caused hours of Photoshopping grief, but it was simple. Most developers could recall the few dozen properties without referring to reference books every two minutes. CSS3 changes everything.

10 Web Design Trends for 2013 For starters, we’d like to say thank you for the amazing reception our free eBook Web design and Mobile Trends for 2013 has had since its launch last week, and especially to all those who made it possible by sharing their insightful opinions. Today we’re doing a review of the end conclusions, where we will identify and analyze 10 of the key trends. This is just a brief overview of the conclusions you can read in the book. In fact, we have now released an updated version of the eBook in PDF format, which includes a few corrections and a new layout for an easier and more enjoyable reading experience. It’s no easy task putting together a short summary of all the interviews, but as far as we’re concerned, there are a few memorable statements in the book which nicely encapsulate the conclusions we’ve come to: Bruce Lawson:“If I go to a train website, I don't really want to see a picture of Richard Branson smiling at me, I don't want to read the Chief Exec's ambitions and life history.

Create a Game Character with HTML5 and JavaScript { William Malone } by William Malone In this series we will explore how to create a game character using HTML5 Canvas and JavaScript. Each part of the series will give step by step instructions how to give our character a new ability such as running and jumping. How To Make a Tile-Based Game with Cocos2D This post is also available in: Japanese If you're new here, you may want to subscribe to my RSS feed or follow me on Twitter. Thanks for visiting! Update 1/17/2013 Fully updated for Cocos2D 2.1 rc0, Tiled 0.9.0 (released Feb 2013), Xcode 4.6, and ARC. (original post by Ray Wenderlich, update by Charlie Fulton). Mmm, tasty melons! Lost Garden Not all emotions are created equal. Consider: It is a distinctly different thing to feel sad while reading about a dying mother than to actually feel sad because your mother is dying. The former is a shadowy reflection that we intuitively understand is not immediately threatening. The later is raw, primary and life changing. I've yet to see existing terminology for this phenomena, so at the risk of stepping on existing toes, let's use the following labels. Shadow emotions: The emotions we feel when partaking in narratives, art and other safely evocative stimuliPrimary emotions: The emotions we feel when we are in a situation with real perceived consequences.

HTML5 Pacman shim for font face This is most of the Pacman game everyone knows and loves. It isnt a complete implementation yet and I do plan on working some more on it, however it should mostly be playable. Developing Multiplayer HTML5 Games with Node.js One day I had some friends over at my house introducing me some cool iPad games. One of the games was Osmos, developed by an Canadian indie studio called Hemisphere Games. You control a little blob that floats in 2D space, and the only thing your blob can do is shoot pieces of itself in a given direction, which propels it in the opposite direction. The rules of the game are simple, the main rule being that when two blobs collide, the larger one will consume the smaller one.

AT&T Developer Program A few months ago at work, we decided to build a realtime multiplayer game for the web, and we chose to go with Node.js for our multiplayer server. It was a pretty strong success, and was up running for several months without a single crash or restart of the Node.js process. We decided to write our game in Node.js because we had heard of this cool platform and had been itching to use it for a while. This turned out to be a blessing because it was very easy to get into, and many interesting Node.js libraries exist to help accomplish various task. A side benefit of using node is that javascript itself is very easy to use. This allowed us to focus on the problems all realtime network games face with less fussing with the constraints or compile times of less dynamic languages.

Goodbye Effect Games Friends, The time has come to shut the doors on Effect Games, so we can move onto other projects. But we've preserved some of our old games and demos for you to play with: Built with appMobi Intel® XDK HTML5 development environment - develop, emulate, test-on-device and build apps Download Today Intel® XDK a HTML5 cross-platform solution enables developers to write web and hybrid apps once, and deploy across many app stores and form factor devices. Easy-to-use: Streamlined workflow from design to app storeDevelop faster: Integrated design, test, and build toolsDeploy simply: Across more app stores, and form factors Intel XDK is available as a free download for Windows* 7 & 8 , Apple OS X*, and Ubuntu* Linux* Live Demo “The simplicity of working with layouts and fonts on Spaceport is marvelous. Much time is spent on Starling, coding to position graphics, align them together, sizing fonts, creating the textures, worrying for the resolution on different devices, etc. All that is gone with Spaceport.” “This allows us to either make a complex game twice as fast or make two simple games in the same time we would have done a Starling game, thus monetizing more.” - Alejandro C. Saksida