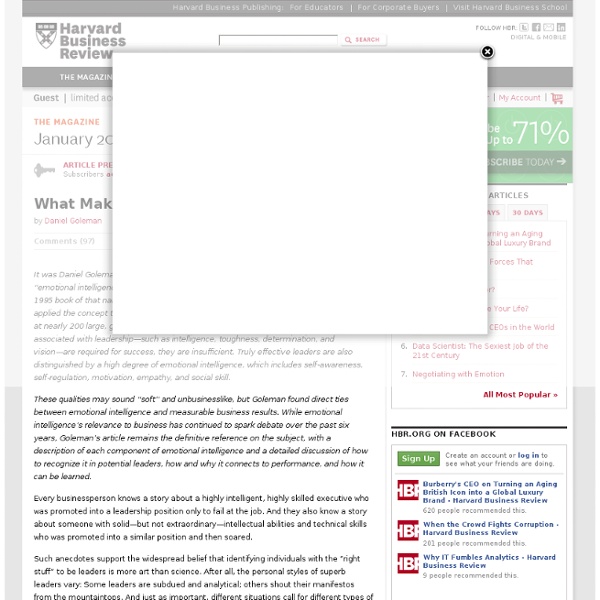 It was Daniel Goleman who first brought the term “emotional intelligence” to a wide audience with his 1995 book of that name, and it was Goleman who first applied the concept to business with his 1998 HBR article, reprinted here. In his research at nearly 200 large, global companies, Goleman found that while the qualities traditionally associated with leadership—such as intelligence, toughness, determination, and vision—are required for success, they are insufficient. Truly effective leaders are also distinguished by a high degree of emotional intelligence, which includes self-awareness, self-regulation, motivation, empathy, and social skill. These qualities may sound “soft” and unbusinesslike, but Goleman found direct ties between emotional intelligence and measurable business results. Every businessperson knows a story about a highly intelligent, highly skilled executive who was promoted into a leadership position only to fail at the job. Evaluating Emotional Intelligence

How To Stop Worrying Undoing the Worrying Habit Once acquired, the habit of worrying seems hard to stop. We're raised to worry and aren't considered "grown up" until we perfect the art. Teenagers are told: "you'd better start worrying about your future". To the extent that worrying is learned/conditioned behaviour, it can be undone. Centuries-old cultural conditioning has given us a nasty neurosis: the belief that happiness must be "earned". Laid on top of the first neurosis is the idea that spending money will make you happy. So: we never stop working, we never stop spending money, we're never really happy – ideal conditions, coincidentally, for a certain type of slave economy. You won't stop worrying if you think it serves you. The fight-or-flight response (FOF) is useful on rare occasions of real danger. Worrying is never useful. Rearranging the mental furniture This deceptively simple technique is effective because it bypasses the psychological obstacles mentioned above. Accelerator-Brake analogy

Memory Improvement Techniques - Improve Your Memory with MindTools.com - StumbleUpon © VeerPRZEMYSLAW PRZYBYLSKI Use these techniques to improve your memory. The tools in this section help you to improve your memory. They help you both to remember facts accurately and to remember the structure of information. The tools are split into two sections. Firstly you'll learn the memory techniques themselves. As with other mind tools, the more practice you give yourself with these techniques, the more effectively you will use them. Mnemonics 'Mnemonic' is another word for memory tool. The idea behind using mnemonics is to encode difficult-to-remember information in a way that is much easier to remember. Our brains evolved to code and interpret complex stimuli such as images, colors, structures, sounds, smells, tastes, touch, positions, emotions and language. Unfortunately, a lot of the information we have to remember in modern life is presented differently – as words printed on a page. Using Your Whole Mind to Remember Use positive, pleasant images.

Nine Things Successful People Do Differently HBR Learn more about the science of success with Heidi Grant Halvorson’s HBR Single, based on this blog post. Why have you been so successful in reaching some of your goals, but not others? If you aren’t sure, you are far from alone in your confusion. It turns out that even brilliant, highly accomplished people are pretty lousy when it comes to understanding why they succeed or fail. 1. To seize the moment, decide when and where you will take each action you want to take, in advance. 3. Fortunately, decades of research suggest that the belief in fixed ability is completely wrong — abilities of all kinds are profoundly malleable. The good news is, if you aren’t particularly gritty now, there is something you can do about it. 7. To build willpower, take on a challenge that requires you to do something you’d honestly rather not do. 8. 9. If you want to change your ways, ask yourself, What will I do instead?

30 Books I’m Glad I Read Before 30 In various ways, these 30 books convey some of the philosophy of how Angel and I live our lives. I honestly credit a fraction of who I am today to each title. Thus, they have indirectly influenced much of what I write about on this site. If you haven’t read these books yet, I highly recommend doing so. Stumbling on Happiness by Daniel Gilbert – Gilbert, a Harvard professor of psychology has studied happiness for decades, and he shares scientific findings that just might change the way you look at the world. What are your favorite books? Photo by: Katie Harris

4 Powerful Reasons to Meditate and How To Get Started | PickTheBrain | Motivation and Self Improvement - StumbleUpon Meditation is the art of silencing the mind. When the mind is silent, concentration is increased and we experience inner peace in the midst of worldly turmoil. This elusive inner peace is what attracts so many people to meditation and is a quality everyone can benefit from. What are the Benefits of Meditation? I’ve been meditating twice a day for the past 9 years because I enjoy it. These are some of the benefits of meditation: Improved concentration – A clear mind makes you more productive, especially in creative disciplines like writing.Less bothered by little things – Do you sometimes allow yourself to get upset by little things? Is Meditation Religious? The great thing about meditation is that our philosophy/religious belief is not importanct. But I don’t have time To Meditate Many people like the idea of meditation, but feel they don’t have enough time. How To Meditate Like anything worthwhile, meditation requires practice. Sit with a straight back. One Pointed Concentration Mantra

Your Use of Pronouns Reveals Your Personality The finding: A person’s use of function words—the pronouns, articles, prepositions, conjunctions, and auxiliary verbs that are the connective tissue of language—offers deep insights into his or her honesty, stability, and sense of self. The research: In the 1990s, James Pennebaker helped develop a computer program that counted and categorized words in texts, differentiating content words, which convey meaning, from function words. After analyzing 400,000 texts—including essays by college students, instant messages between lovers, chat room discussions, and press conference transcripts—he concluded that function words are important keys to someone’s psychological state and reveal much more than content words do. The challenge: Can insignificant words really provide a “window to the soul”? Professor Pennebaker, defend your research. Pennebaker: When we began analyzing people’s writing and speech, we didn’t expect results like this. HBR: Why are function words so important? Ooh. Yes.

13 Business Books MUST READS Having never taken a business class in college I find that I read and listen to a lot of business books to round out my education. The books usually aren't "How to Manage Your Cash Flow" but rather get me to rethink the way I run my business, which--despite no business classes or diploma--continues to be in business 13 plus years after I started it. In that time, here are 13 of the books that had the biggest impact on how I run my business (in no particular order): Drive: The Surprising Truth About What Motivates Us by Daniel Pink: If you supervise anyone in your business, this book is a must read. It shows that what science knows about motivation, business isn't putting into practice. The Knack: How Street-Smart Entrepreneurs Learn to Handle Whatever Comes Up by Norm Brodsky and Bo Burlingham: I wanted to have at least one book that was dedicated to small business and the entrepreneurial spirit.

Seven Speaking Tips That Beat “Pretend Your Audience Is Naked" Aggh. Everyone showed up clothed! Once upon a time, I suffered from glossophobia. This affliction touches billions. It's the fear of public speaking , even to a tiny group. I conquered it by discovering what makes people smile, nod, and listen carefully, because nothing calms you down faster than an interested audience. This is what I've learned. Children plea for them at night, and adults crave them, too. They want to be respected. This principle also underlies another rule of effective speaking: Dress like your audience, but just a little bit better." {*style:<i>Don't try to impress them. </i>*} If you truly want to help your listeners--by informing or motivating them, or improving their lives--they will care and listen. This recalls a favorite tip: We mistrust people who won't look us in the eyes--even if our eyes are among over 200 sets in a room. If you look each person in the eye for a few seconds, you make each person feel important--a feeling that every person craves. . .