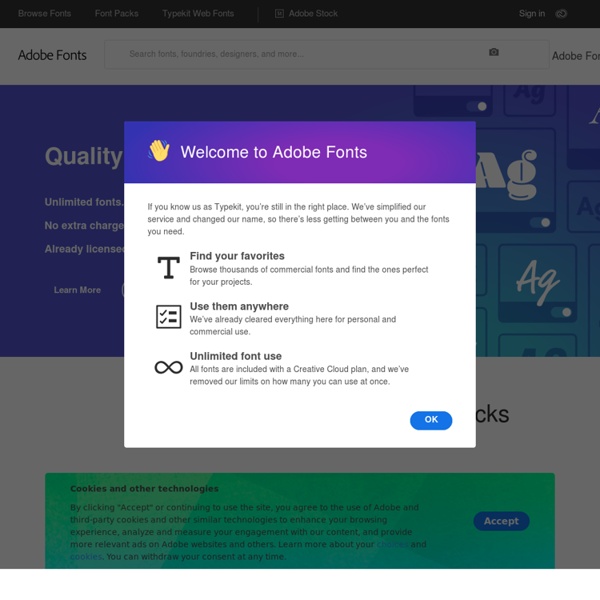 Web Fonts OpenType Control Enable fine typography with kerning and letter spacing controls. Design with ligatures, alternate characters, fractions and other advanced typographic features. Google Webfonts that Don’t Suck Webfonts services like Typekit are great, but for a lot of cases they’re just not practical. For example, if you’re developing a WordPress theme, you can’t ask potential buyers to buy a monthly subscription, and you can’t bundle a font with the theme either unless it’s free. For those cases, Google’s Webfonts service remains the only way to use non-standard fonts in your designs. By the way, this post was inspired by Matthew Butterick’s own critical look at Google Web Fonts. Matthew makes some good points, but overall I still think Google Webfonts is a great initiative.

A jQuery Plugin That Rumbles Elements About The Plugin jRumble is a jQuery plugin that rumbles, vibrates, shakes, and rotates any element you choose. It's great to use as a hover effect or a way to direct attention to an element. Please read this before using jRumble. Flashing and flickering objects on the web can be dangerous. Controlling Web Typography Lettering.js was built to solve a problem. As web typography improves, web designers want the same level of control print designers have. Just as we’ve moved beyond Helvetica and Times New Roman, we’ve begun to think about web type in finer detail than <h1>or <span> tags currently (semantically) allow. For example, when Dave Rupert and I prepared to markup the 3 sites for the Lost World’s Fairs project, we saw elements in each design that would require an excessive number of <span> tags to target words, even letters, at a time.

Fontograph - This week's selection This page is updated with a new selection of ten fonts at the end of every week. Don't hesitate to come back often. The old weekly selections can be found in the Archives section of this site. Click the left mouse button on a font's representation to get it or click with the right mouse button and choose 'save link as' in the dialog box.

Beautiful web type — the best typefaces from the Google web fonts directory Lucius Annaeus Seneca60 AD Among the numerous faults of those who pass their lives recklessly and without due reflexion, my good friend Liberalis, I should say that there is hardly any one so hurtful to society as this, that we neither know how to bestow or how to receive a benefit. It follows from this that benefits are badly invested, and become bad debts: in these cases it is too late to complain of their not being returned, for they were thrown away when we bestowed them. Nor need we wonder that while the greatest vices are common, none is more common than ingratitude: for this I see is brought about by various causes. Slider Kit, sliding contents with jQuery As many jQuery plugins, Slider Kit is a subtle combination of HTML, CSS and jQuery. The jQuery itself won't do any design or CSS. So you'll need to work on a CSS skin to get the design you want. But first, let's see some HTML.

Convert OpenType Font => Woff Web Font Can you imagine free web hosting service that has 99.9% uptime? Too good to be true? No more! 30 of the Best Web Typography Resources Online It seems there are two camps among web designers: those who embrace web typography, experiment with it, and try new things in virtually all of their designs; and those who avoid it like the plague, opting to use standard, web-safe font stacks with little variation. It also seems like a lot of the designers who fall into the second group wish they were more like the first. The resources below can help you improve your web typography, regardless of which camp you fall into. There are tools for creating unique typography, references and articles that can teach you typographic principles, and plenty of inspiration and news to keep you updated on the state of web typography.

5 of the Best CSS3 Font Tools Fonts have made the most dramatic visual impact on the web since graphic support was added to browsers. A few years ago, it would be impossible to find a website using anything other than Arial, Verdana, Tahoma, Times New Roman or Georgia (or, heaven forbid, Comic Sans). While there’s nothing wrong with standard font stacks, they can become a little monotonous. Internet Explorer has supported web fonts for more than a decade but it’s taken competing browsers a little longer to catch up. Supersized - Full Screen Background Slideshow jQuery Plugin Here it is, all the Supersized documentation you're so eagerly waiting to read. Enjoy. Glossary Getting Started

This Is Tomorrow Typeface Classification For the purposes of typeface classification, font families broadly divide into seven major groups: Slab Serif, Serif Old Style, Serif Transitional, Serif Modern, Sans Humanist, Sans (Neo)Grotesque and Sans Geometric. Poster features well designed font classics and large font families being classified into two separate categories. Design: Marcin PlonkaClient: Self-initiated Year: 2009 Icon Fonts are Awesome Because you can easily change the size Because you can easily change the color Because you can easily shadow their shape Because they can have transparent knockouts, which work in IE6 unlike alpha transparent pngs. Because you can do all the other stuff image based icons can do, like change opacity or rotate or whatever. You'll be able to do things like add strokes to them with text-stroke or add gradients/textures with background-clip: text; once browser support is a bit deeper. The icon font used on this page is Fico by Lennart Schoors then ran through IcoMoon for custom mappings. Here's a large collection of more choices.

30 Best Photoshop 3D Text Effect Tutorials Early this year, I shared with you some “30 Astonishingly Fresh Examples of 3D Typography“. Now we have 30 of the best Photoshop 3D text effect tutorials rounded up for everyone who wants to create their own stunning 3D text effect. 3D text effect is a strong and eye-catching text effect, and quite easy to create as opposed to many preconceptions that only hardcore digital artists or designers can do this. You don’t need to learn a separate 3D software in order to create one. For most basic 3D effects, you’ll only need Photoshop, using bevel and emboss styles, pattern overlays, along with combining different techniques to seamlessly mount your 3D text into a related background.

Typekit is the easiest way to use real fonts on the web. It's a subscription-based service for linking to high-quality Open Type fonts from some of the worlds best type foundries. Our fonts are served from a global network on redundant servers, offering bulletproof service and incredible speed. And it couldn't be easier to use. Want to know more about fonts on the web? Read on... by cupcakejenni Apr 7