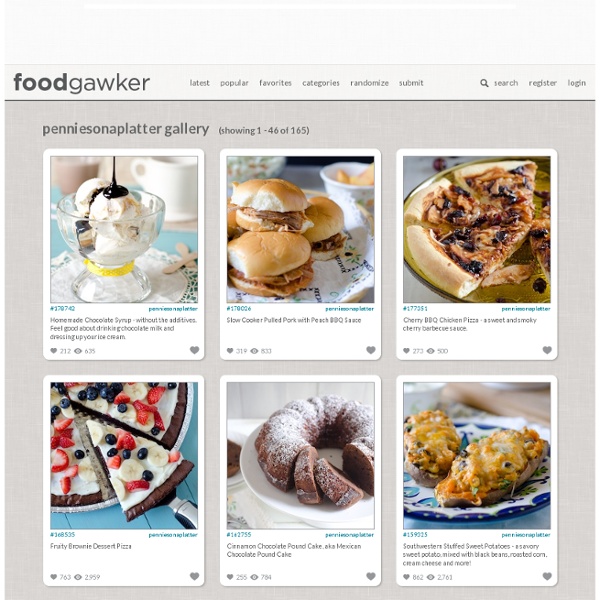 Baked Eggs with Bacon and Spinach Do y’all remember the scene in Runaway Bride (that’s an Oscar contender if I’ve ever seen one…) where Julia Roberts realizes that she doesn’t know how she likes her eggs? You know, because she’s always turning herself into the girl that the guy she’s marrying wants to be with? Yeah. That’s not me. I know how I like my eggs, although I will say that it depends on the day. Chocolate Covered Brownie Ice Cream Sandwich Recipe Chocolate Covered Brownie Ice Cream Sandwich Brownies and Bars, Chocolate, Dessert, Frozen Desserts, Guest Posts | 66 comments I’m taking some time off to be with my family for a little while. The following recipe is written by Jaime of Sophistimom. Welcome, Jaime! Best Street Art of 2011 - StumbleUpon December 27, 2011 | 72 Comments » | Topics: Art, Pics Hot Stories From Around The Web Other Awesome Stories

Valentine’s Day Treats: Red Velvet Cheesecake Brownies Written By: Julia Mercier Decadent Red Velvet Cheesecake Brownies 393 Whether you’re baking for your spouse, friend, or family this Valentine’s Day, share your love by giving this decadent red dessert. It breaks away from the typical holiday recipes with bright swirls of red brownie and cheesecake batter.No need to be an expert in the kitchen either- this rich, irresistible dessert only requires a few basic steps. With this recipe, red velvet cheesecake brownies may quickly become the new favorite in your house. The Comfort of Eggs in a Basket Eggs in a basket was the first meal I ever cooked. I was in 5th grade, and it was a Sunday morning at my best friend's house after a sleepover. We woke up hungry, and for some reason his parents weren't home. This confused me--my parents would never do that--but more important than confusion was the fact that I was terribly hungry, and I didn't see how that problem was going to be solved, since his house never had any cereal in it.

Perfect Iced Coffee Iced coffee is my life. When I wake up, often around the time party animals on the west coast are just heading home, I start each day not with a cup of freshly brewed hot java, but with a tall, blessed glass of creamy iced coffee in a glass. I’ve been an iced coffee freakazoid for years and years.