Annie Murphy Paul: What we learn before we're born 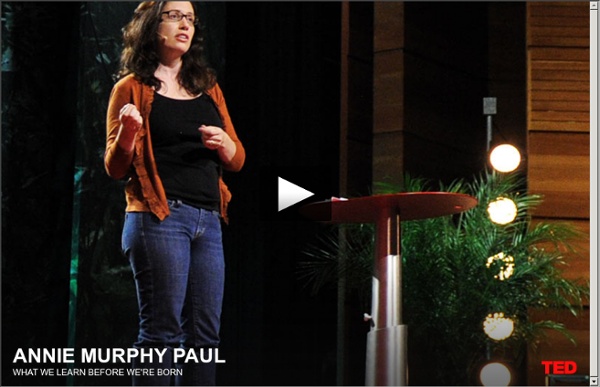 Natural Hair Care: Washing Your Brushes & Combs - Humblebee & Me One of my favourite articles on natural(ish) hair care dates back to the early 1900s, and is written by Mlle. Aline Vallandri, a woman who is famous for the length and health of her hair. The article is accompanied by a rather shocking (to modern eyes, at least) photograph of her with her hair… which drags at her feet. When you see the photo, you can understand the fame: I say natural-ish because, while turn of the century hair care embodied a lot of today’s natural hair care ideals (like infrequent washings and boar bristle brushes), it also advocated things like singeing (which is as bad of an idea as it sounds) and mercury tinctures. So, best not to follow all the advice in a 1905 ladies magazine.

Can motors in wheels spark electric car revolution? There may have been more alluring electric cars on display at this year's Tokyo Motor Show, but the beauty of this prototype lies in its performance. The SIM-LEI can travel 333 kilometers (more than 200 miles) on a single charge, say its Japanese creators SIM Drive, and it also boasts supercar-like acceleration -- 0 to 60 mph in just 4.8 seconds. The key to these remarkable statistics lies not, as you might expect, underneath the hood but in its wheels. Most electric vehicles house a single motor in the area vacated by the petrol engine, but the SIM-LEI has four motors, which fit in the hubs its wheels. Each one delivers 65 kilowatts, giving the car a total output of 260 kilowatts, compared with the 80 kilowatts of output available in, say, the Nissan Leaf.

29+ Evidences for Macroevolution: Part 1 Prediction 1.1: The fundamental unity of life According to the theory of common descent, modern living organisms, with all their incredible differences, are the progeny of one single species in the distant past. In spite of the extensive variation of form and function among organisms, several fundamental criteria characterize all life. The neural and cognitive correlates of aimed throwing in chimpanzees: a magnetic resonance image and behavioural study on a unique form of social tool use + Author Affiliations ↵*Author for correspondence (whopkin@emory.edu, whopkins@agnesscott.edu). Abstract It has been hypothesized that neurological adaptations associated with evolutionary selection for throwing may have served as a precursor for the emergence of language and speech in early hominins. Although there are reports of individual differences in aimed throwing in wild and captive apes, to date there has not been a single study that has examined the potential neuroanatomical correlates of this very unique tool-use behaviour in non-human primates. In this study, we examined whether differences in the ratio of white (WM) to grey matter (GM) were evident in the homologue to Broca's area as well as the motor-hand area of the precentral gyrus (termed the KNOB) in chimpanzees that reliably throw compared with those that do not.

How to Moisturize Hair- 28 Tips on Preventing Dryness & Hydrating Hair Why So Dry? The Science Of Dry Hair There are two basic reasons for dry hair. 40 Witty Campaign Posters for a Cause Non-profit organizations use posters to deliver a particular message. These help inform people about current issues, problems and even the possible consequences of their actions. With a sentence that contains strong words or images, these posters give more impact than common commercial posters. To give you an idea, here are 20 sample campaign posters to provoke your imagination. Enjoy! Wildlife is becoming harder to find in Vietnam.

Inside the mind of the octopus Inside the mind of the octopus by Sy Montgomery Photograph: Brandon Cole ON AN UNSEASONABLY WARM day in the middle of March, I traveled from New Hampshire to the moist, dim sanctuary of the New England Aquarium, hoping to touch an alternate reality. I came to meet Athena, the aquarium’s forty-pound, five-foot-long, two-and-a-half-year-old giant Pacific octopus. Neuroscientists identify a master controller of memory When you experience a new event, your brain encodes a memory of it by altering the connections between neurons. This requires turning on many genes in those neurons. Now, MIT neuroscientists have identified what may be a master gene that controls this complex process. The findings, described in the Dec. 23 issue of Science, not only reveal some of the molecular underpinnings of memory formation — they may also help neuroscientists pinpoint the exact locations of memories in the brain.

SUPERSELECTED - Black Fashion Magazine Black Models Black Contemporary Artists Art Black Musicians I remember when I first cut off my hair a couple of years ago, my first thought was, “eek, what now?”. I decided on braids, but braids aren’t for everyone. If you are seeking more versatility with your recently shorn locks, these short hair tutorials might be just what you need. Faux Natural Hair Bun on TWA by Eleutheran Beauty Bantu knot out on Short Natural hair by Queen teshna Quick, Cute & Easy protective style on short natural hair (4c hair) by SecretlyLimitless Grime-fighting garments aim to purify air Polymer chemist Tony Ryan and fashion designer Helen Storey have joined forces to create clothing which can purify the air. Catalytic Clothing contains the same nanotechnology found in self-cleaning paints and glasses but applies it to clothes via a special fabric conditioner. A catalyst -- titanium dioxide -- applied during a normal home washing cycle breaks down harmful airborne pollutants when exposed to ultraviolet light. Ryan discovered that treated jeans were particularly good at absorbing pollution. Although only small amounts of pollution -- around two grams per 500-gram pair of jeans -- is removed from the air, Ryan and Storey say if the technology was worn widely then city pollution could be reduced. A short film featuring British model Erin O'Connor and music by rock group Radiohead was released in 2011 to promote the idea to the public.

Shot of young stem cells makes rapidly aging mice live much longer and healthier, researchers report Mice bred to age too quickly seemed to have sipped from the fountain of youth after scientists at the University of Pittsburgh School of Medicine injected them with stem cell-like progenitor cells derived from the muscle of young, healthy animals. Instead of becoming infirm and dying early as untreated mice did, animals that got the stem/progenitor cells improved their health and lived two to three times longer than expected, according to findings published in the Jan. 3 edition of Nature Communications. Previous research has revealed stem cell dysfunction, such as poor replication and differentiation, in a variety of tissues in old age, but it's not been clear whether that loss of function contributed to the aging process or was a result of it, explained senior investigators Johnny Huard, Ph.D., and Laura Niedernhofer, M.D., Ph.D. Dr. As the progeria mice age, they lose muscle mass in their hind limbs, hunch over, tremble, and move slowly and awkwardly.

Related:  Brain
Related:  Health and Well-Being   -  PeerBlock – Peerblock Site   -  Conscious Entities   -  Codec Guide: K-Lite Codec Pack - For Windows 10 / 8.1 / 7 / Vista / XP   -  Bob Thurman: We can be Buddhas | Video on TED.com   -  CCCP - Combined Community Codec Pack   -  Belarc Advisor - Free Personal PC Audit, for software, hardware and security configuration information on your computer. Software license management, IT asset management, cyber security audits, and more.   -  Settings Manager - Global Privacy Settings Panel   -  One red paperclip - Wikipedia, the free encyclopedia   -  7-Zip | SourceForge.net   -  UNLOCKER 1.9.2 BY CEDRICK 'NITCH' COLLOMB   -  CCEnhancer - SingularLabs   -  Garth Lenz: The true cost of oil | Video on TED.com   -  Neil MacGregor: 2600 years of history in one object | Video on TED.com   -  Stuff no one told US.. | Chicquero   -  Bryan Stevenson: We need to talk about an injustice | Video on TED.com   -  Questions no one knows the answers to | Video on TED.com   -  Deep ocean mysteries and wonders | Video on TED.com   -  Marco Tempest: A magical tale (with augmented reality) | Video on TED.com   -  How Not to Be Offended   -  Tal Golesworthy: How I repaired my own heart | Video on TED.com   -  Life Quotes, Inspirational Quotes, Facebook Quotes, Relatable Quotes - ThatOneRule   -  Brian Greene: Is our universe the only universe? | Video on TED.com   -  Boaz Almog “levitates” a superconductor | Video on TED.com   -  5 Ways to Trick Your Body Into Being More Awesome   -  The Awakening   -  Lisa Kristine: Photos that bear witness to modern slavery | Video on TED.com   -  Types of Skills Everyone Should Know &#150; Video &#150; Top 100 Important Skills - Popular Mechanics   -  9 out of 10 Americans are completely wrong about this mind-blowing fact.   -  Graham Hancock - The War on Consciousness BANNED TED TALK - YouTube   -  Out of Sight, Out of Mind: A visualization of drone strikes in Pakistan since 2004   -  Newspaper Blackout Poetry   -  Morgellons Exposed - Jan Smith Home Page   -  A Day at the Park - Comics that say something. - Quora   -  The 6 types of Questions your Students Need to Know about ~ Educational Technology and Mobile Learning   -  Watch A Student Totally Nail Something About Women That I've Been Trying To Articulate For 37 Years   -  Java Downloads for All Operating Systems   -  Welcome to Forbes   -  The Young Turks