My Mother's Peasant Bread: The Easiest No-Knead Bread You Will Ever Make 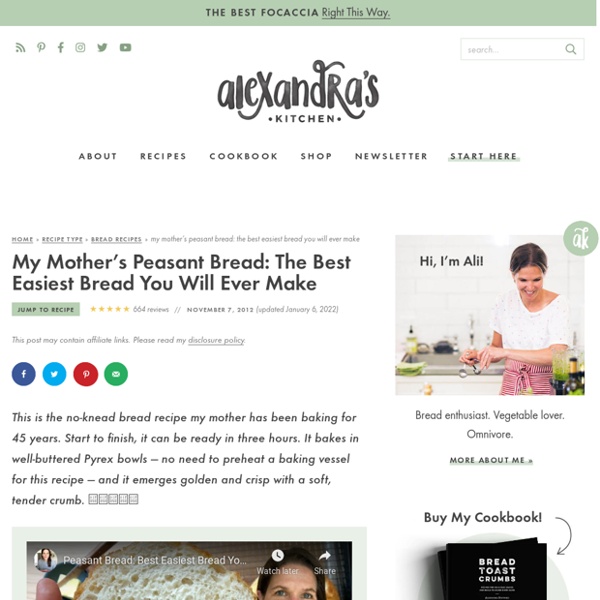 View (More Video Tutorials Here.) When I tell you that, if forced, I had to pick one and only one recipe to share with you that this — my mother’s peasant bread — would be it, I am serious. I would almost in fact be OK ending the blog after this very post, retiring altogether from the wonderful world of food blogging, resting assured that you all had this knowledge at hand. This bread might just change your life. The reason I say this is simple. I whole-heartedly believe that if you know how to make bread you can throw one hell of a dinner party. And upon tasting homemade bread, people act as if you’re some sort of culinary magician. The Magic of Peasant Bread So what, you probably are wondering, makes this bread so special when there are so many wonderful bread recipes out there? But this is a no-knead bread that can be started at 4:00pm and turned out onto the dinner table at 7:00pm. Five Favorite Peasant Bread Variations How to Store Bread Just-mixed dough, ready to rise: Print Description

Did All Democrats Vote Against a 2.8 Percent Social Security COLA Increase? In mid-October 2018, Facebook users shared an inaccurate meme asking “Were any of you aware that ALL the Democrats voted AGAINST the 2.8% Social Security cost of living increase?”: No Democrats, or any other legislators for that matter, voted for or against the 2.8 percent cost of living allowance (COLA) increase that Social Security recipients will see beginning in 2019. Since 1975, COLA increases have kicked in automatically and are based on changes in the consumer price index, a figure calculated by the U.S. Bureau of Labor Statistics.

4 types of ‘adobo,’ ‘lechon’ belly, ‘balbacua’–authentic Filipino heirloom recipes Myke “Tatung” Sarthou finds it hard to say no to people. When he started cooking—borne out of passion and family history than a formal education—for friends at his home in Quezon City, splendid tales of his dishes spread like wildfire, chiefly among acquaintances, and later, ladies who lunch, politicians, power players and, soon, strangers. “I’ve had a guy—I did not know him—who wanted to surprise his date with a romantic dinner,” said chef Tatung on a bright Sunday morning.

Toasted Coconut Brussels Sprouts I think we’re all still pretty shocked that I actually enjoy brussels sprouts. And! Let’s take a moment thank the heavens above that I do or else… nary a vegetable would cross my lips. And in order to continue this… fondness… I have for the little green chunks o’ love, I gotta make sure they don’t overstay their welcome. Ever. Because I can’t get sick of the one plant type thing I’ve got going on. !!

Tom Hanks' WWII drama filming aboard USS Kidd this week BATON ROUGE - Filming for Tom Hanks' next movie is underway in Baton Rouge. The WWII drama 'Greyhound' is filming aboard the USS Kidd Monday and will likely continue to film there throughout the week. Filmmakers were last onboard the destroyer in late March, testing out machinery before cameras rolled. Many in the area stopped to watch all the action.

How To Make Easy Rosemary Focaccia I'll be honest with you: I don't care for focaccia that's topped with a lot of stuff. I like my focaccia to be a simple, herby bread with the emphasis on salt and olive oil. I may allow for one or two additions besides the sea salt, olive oil and herbs. But that's it. You may feel differently, and of course, that's just fine. You can use this recipe as a base for all your favorite focaccia toppings.

Cranberry and Pecan Vegan Cheeseball Recipe Growing up as the only vegetarian in a big family of omnivores was pretty rough. Most of my holiday meals involved a plateful of sides, appetizers, or worse, hanging in there until after dinner and making a meal of dessert. My family has changed quite a bit since those days, and so have I. For one thing, I learned to cook, which means I’ve always got a dish in hand and will never go hungry again at a family gathering. For another thing, my diet has narrowed even more, so now in addition to being meatless, dairy is almost completely out as well. Fortunately, my family lately seems to be moving in the same direction.

Tom Hanks' Baton Rouge-filmed 'Greyhound' to release on AppleTV+ BATON ROUGE- Nearly two years after Tom Hanks' WWII movie 'Greyhound' was filmed in downtown Baton Rouge on the USS Kidd, the major movie release will be on AppleTV+ rather than in theaters due to the COVID-19 outbreak. The World War II drama, written by and starring Tom Hanks, will now premiere in 100 countries on the fairly new streaming device, skipping a traditional release. The film follows the commander of the titular Navy destroyer as it escorts a military convoy during the second World War. Hanks adapted the screenplay from the novel 'The Good Shepherd.'