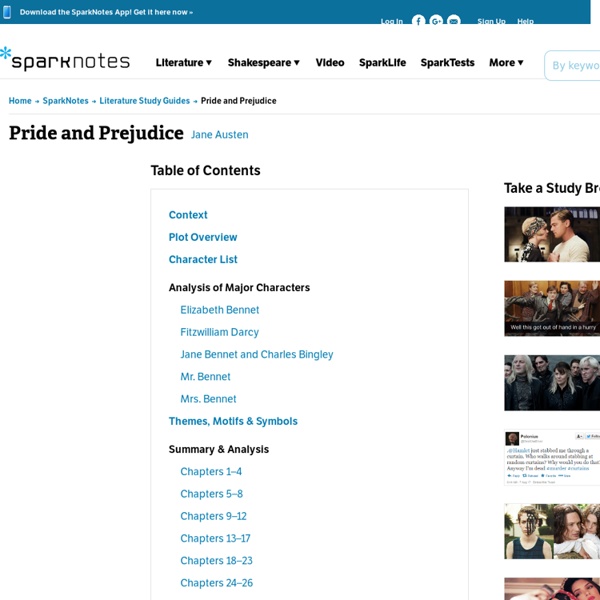 List of Works, Study Guides & Essays Jane Austen was born on December 16, 1775, at Steventon Rectory in Hampshire, England. Her father, Reverend George Austen (1731-1805) was the rector at Steventon. In 1764, he married Cassandra Leigh Austen (1739-1827) who was from a patrician family. Jane Austen was the youngest of George and Cassandra's eight children - she had six brothers and one sister. The family was tightly-knit, and Jane was particularly close to her sister, Cassandra, and her brother, Henry, who would later became her literary agent. A' Level Spanish Revision Time Enter your email address to receive notification of revisiontime updates & new services 1. Languages Online

Jane Austen Quiz - Interactive Feature Published: August 8, 2013 A panel of Austen experts devised a quiz to separate the Lizzys from the Lydias, the true devotees from the casual admirers. Our panelists: Janine Barchas, professor of English at the University of Texas, Austin, and the creator of the Web site What Jane Saw, an online gallery that reconstructs an art exhibition Austen attended in 1813. Devoney Looser, professor of English at Arizona State University, the editor of “Jane Austen and Discourses of Feminism” and an erstwhile roller derby competitor known as Stone Cold Jane Austen.

Othello enthusiastic jealousy by IndustrialCarnage, April 02, 2013 This is perhaps one of Shakespeare's more interesting plays, if you will. It's Jane Austen's birthday! Let's get this party started! Happy freaking birthday, Jane Austen! It is a truth universally acknowledged that two hundred years after publication, Jane’s words are still held near and dear by readers all over the world. Which is why her birthday, officially declared as Jane Austen Day by the Jane Austen Center in Bath, England, is being celebrated with teas, readings and parties in cities around the country—from Houston to Atlanta, and from New York to Sacramento. In case you can’t get to one of these celebrations, we’ve put together this list of ways you can celebrate Jane’s birthday, other than the obvious. . . cake.

Othello Navigator: Themes: Romantic Love Romantic Love When Iago tells Othello that Brabantio will try to annul his marriage to Desdemona, Othello replies that he is worthy of her, and that for her he has given up some precious freedom. He says, "But that I love the gentle Desdemona, / I would not my unhoused free condition / Put into circumscription and confine / For the sea's worth" (1.2.25-28). Later in the scene, when Brabantio and his posse catch up with Othello, Brabantio accuses Othello of using magic and drugs on Desdemona. To Brabantio's way of thinking, that's the only thing that makes sense.

The ultimate Jane Austen literary quiz English novelist Jane Austen, who was born December 16, 1775, remains one of history's most influential writers. As a woman on the lower rung of the landed gentry, Austen imbued her love stories with social and political commentary on a variety of salient issues, from inheritance law to the expectations of women to the country's class divide. That she consistently did this with wit and verve has only made her more beloved in the eyes of literary critics and fans alike. To celebrate Austen's achievements, we present this literary quiz that draws from her most popular novels! Compare and contrast the marriage proposals of Mr. Collins and Mr. Darcy in "Pride and Prejudice" and Elizabeth's... One of the main themes of the novel Pride and Prejudice is marriage. Austen portrays the many different attitudes to marriage that existed in her time through the medium of her characters. The proposals from Collins and Darcy represent the different attitudes towards marriage, as well as giving a greater insight into their personal characteristics and behaviour.

Jane Austen in quotes: 30 tips for a successful life It’s no longer universally acknowledged that “a single man in possession of a good fortune must be in want of a wife”, but many of Jane Austen’s thoughts on love, relationships, class, clothes and even the joys of nature are amazingly relevant to modern life. Today marks the 239th anniversary of the author’s birth, and has also been designated the first ever Jane Austen day – to mark the occasion, here are some of the best quotes from the novelist and her characters. On love There are as many forms of love as there are moments in time.” — Personal correspondence