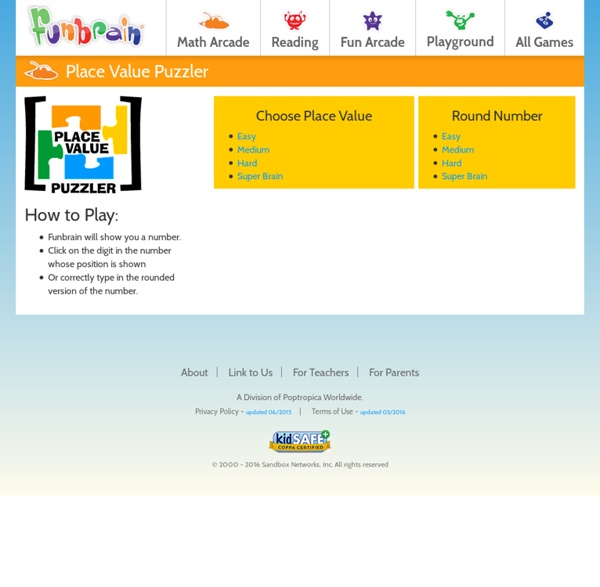 Math Baseball Advertisement One Player Pick the kind of game and level you wish to play. Click "Play Ball" to begin. How to Play: FUNBRAIN will give you a math problem. Decimals A Decimal Number (based on the number 10) contains a Decimal Point. First, let's have an example: Here is the number "forty-five and six-tenths" written as a decimal number: The decimal point goes between Ones and Tenths. 45.6 has 4 Tens, 5 Ones and 6 Tenths, like this: Now, let's discover how it all works ... Place Value It is all about Place Value ! When we write numbers, the position (or "place") of each digit is important. In the number 327: the "7" is in the Ones position, meaning 7 ones (which is 7), the "2" is in the Tens position meaning 2 tens (which is twenty), and the "3" is in the Hundreds position, meaning 3 hundreds. ... and ... And that is a Decimal Number! We can continue with smaller and smaller values, from tenths, to hundredths, and so on, like in this example: Have a play with decimal numbers yourself: Large and Small So, our Decimal System lets us write numbers as large or as small as we want, using the decimal point. Zoom into decimals ... See decimals on the Zoomable Number Line

APOLOGIZING Doesnt Mean Place Value Millionaire In this millionaire-style game, students will read and write decimals to the thousandths place using base-ten numerals. This is a single-player game that can be played on computers, iPads, and other tablets. You do not need to install an app to play this game on the iPad. The game is based on the following Common Core math standards: CCSS 4.NBT.1 Recognize that in a multi-digit whole number, a digit in one place represents ten times what it represents in the place to its right. CCSS 4.NBT.2 Read and write multi-digit whole numbers using base-ten numerals, number names, and expanded form. CCSS 5.NBT.3.A Read and write decimals to thousandths using base-ten numerals, number names, and expanded form, e.g., 347.392 = 3 × 100 + 4 × 10 + 7 × 1 + 3 × (1/10) + 9 × (1/100) + 2 × (1/1000).