HTML5 Please - Use the new and shiny responsibly 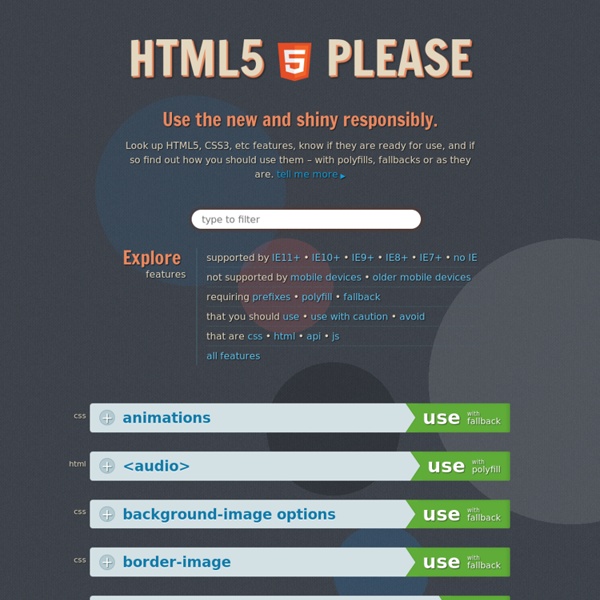 Grid Designer 2 If you're familiar with the grid, a bit of design and basic typography, using this script should be pretty easy - most of the functions are pretty self-explanatory. If you're unfamiliar with grids in general, you could start by reading an excellent series of articles by web designer Mark Boulton. For those who want a real understanding of the theory of grids in relation to design and typography, I strongly recommend this book. On the Columns tab, you can start your design in two ways: Fill in the number of columns, total width, gutters and margin widths, all specified in pixels - then press the design button. Recalculate the settings in various ways by clicking the row of buttons located next to each setting.

The Best CSS3 Tools, Experiments And Demos For Web Developers CSS3 is already the present on the Web. An authentic reality bursting with possibilities. On a daily basis Awwwards selects the best of the Web universe with the most spectacular examples of the latest version of web styling language par excellence.Tools & Generators | Experiments & Demos | Animations & PicturesEnjoy! CSS3 Tools & Generators: At the same time that the use of CSS3 has extended, lots of tools and code generators have popped up all over the place to try and facilitate coding work and simplify the application of new properties for the developer.

How Your Website Looks On Different Devices And Browsers See How To Use BrowserStack First of all to use BrowserStack, you’ll need to visit their site at www.browserstack.com/screenshots/ Which will give you a page similar to below. Using BrowserStack is really simple, First – Insert your web address / or a theme demos web address (like in the image above)Then choose the different devices and browsers you want to see a screenshot ofClick “Generate screenshots” (You don’t need to download anything, you’ll use BrowserStack within your browser.) HTML5 This specification defines the 5th major version, second minor revision of the core language of the World Wide Web: the Hypertext Markup Language (HTML). In this version, new features continue to be introduced to help Web application authors, new elements continue to be introduced based on research into prevailing authoring practices, and special attention continues to be given to defining clear conformance criteria for user agents in an effort to improve interoperability. This section describes the status of this document at the time of its publication. Other documents may supersede this document. A list of current W3C publications and the latest revision of this technical report can be found in the W3C technical reports index at This document was published by the Web Platform Working Group as a W3C Recommendation for HTML 5.2 that would obsolete the HTML 5.1 Recommendation.

Coding An HTML 5 Layout From Scratch HTML5 and CSS3 have just arrived (kinda), and with them a whole new battle for the ‘best markup’ trophy has begun. Truth to be told, all these technologies are mere tools waiting for a skilled developer to work on the right project. As developers we shouldn’t get into pointless discussions of which markup is the best. Language subtag lookup app (Un outil officieux de recherche de sous-étiquettes de langues permet un usage simplifié du registre IANA) BCP 47 language tags are built from subtags in the IANA Subtag Registry. This tool helps you find or look up subtags and check for errors in language tags. Read Choosing a Language Tag for step-by-step guidelines on creating language tags. This tool also provides information to guide your choices.

Ghostlab One site. One experience Whether you want it or not, your site is going mobile - every day. Rotating Words with CSS Animations Using CSS Animations we will change or rotate some parts of a sentence. View demo Download source In today’s tutorial we’ll create another typography effect. The idea is to have some kind of sentence and to rotate a part of it. 50 Advanced HTML5 Demos to show It's Power Flash vs HTML5 is one of the hottest topic today , but we are not getting in the argument of which is superior to other and which is not. Flash will always be an awesome choice for rich content web applications and games same as HTML5 in developing cool animations and simple gaming applications unless some major development to be made in future years. Today we have collected 50 awesome HTML5 demos to show its potential.

HTML minifier HTML Minifier (v3.4.0) Treat attributes in case sensitive manner (useful for custom HTML tags) Omit attribute values from boolean attributes Don't leave any spaces between display:inline; elements when collapsing. Must be used in conjunction with collapseWhitespace=true Collapse white space that contributes to text nodes in a document tree Always collapse to 1 space (never remove it entirely). Must be used in conjunction with collapseWhitespace=true Use direct Unicode characters whenever possible Parse input according to HTML5 specifications Insert tags generated by HTML parser Keep the trailing slash on singleton elements Specify a maximum line length. Select: All, None, Reset HTMLMinifier is made by kangax, using tweaked version of HTML parser by John Resig (which, in its turn, is based on work of Erik Arvidsson).

Getting Started - Google Web Fonts This guide explains how to use the Google Fonts API to add fonts to your web pages. You don't need to do any programming; all you have to do is add a special stylesheet link to your HTML document, then refer to the font in a CSS style. A quick example Here's an example. Copy and paste the following HTML into a file: 13 Essential Tools to Check Cross-Browser Compatibility With an endless combination of modern and legacy browsers for users to choose from (depending on their system capabilities), it's our responsibility as designers and developers to ensure the websites we build perform adequately. Testing multiple browsers on multiple platforms isn't just difficult — it can be virtually impossible without the correct resources. However there are tools that let you comprehensively test your website, and check if it successfully displays across various browsers, platforms and resolutions.

Look up HTML5, CSS3, etc features, know if they are ready for use, and if so find out how you should use them – with polyfills, fallbacks or as they are by emmrichard Mar 25