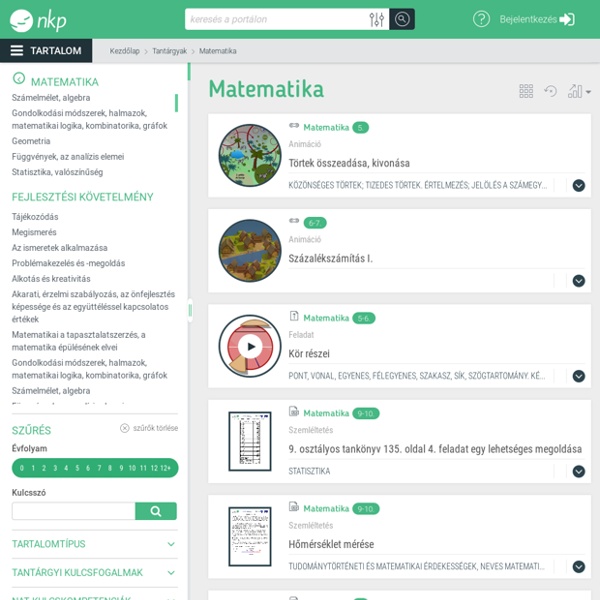 ‎Einstein's Riddle Logic Puzzle on the App Store (Klasszikus játék logikus gonolkodás fejlesztése) Real Einstein Challenge is a logic puzzle to challenge your brain. It is known as different names, such as Einsteins Riddle, Zebra Puzzle or Sherlock Holmes Puzzle. The game presents a logic problem that gives you several clues describing a scenario involving a number of people. Each person has a certain job, owns a certain pet, likes some kind of sport, among other attributes. The 11 most beautiful mathematical equations This equation of special relativity describes time dilation. Shutterstock/optimarc Mathematical equations aren't just useful -- many are quite beautiful. And many scientists admit they are often fond of particular formulas not just for their function, but for their form, and the simple, poetic truths they contain.

Szögfüggvények - Trigonometry, Unit circle, Szinusz Témák Trigonometry Unit circle Szinusz Koszinusz Tangents Leírás Boole - 19th Century Mathematics The British mathematician and philosopher George Boole, along with his near contemporary and countryman Augustus de Morgan, was one of the few since Leibniz to give any serious thought to logic and its mathematical implications. Unlike Leibniz, though, Boole came to see logic as principally a discipline of mathematics, rather than of philosophy. His extraordinary mathematical talents did not manifest themselves in early life. He received his early lessons in mathematics from his father, a tradesman with an amateur interest in in mathematics and logic, but his favourite subject at school was classics. He was a quiet, serious and modest young man from a humble working class background, and largely self-taught in his mathematics (he would borrow mathematical journals from his local Mechanics Institute). But it was his contributions to the algebra of logic which were later to be viewed as immensely important and influential.

Part 1: Math and Project Based Learning… 22 Amazing Resources Welcome this first of a four part series intended to provide Math teachers with some outstanding PBL resources. First, to ensure you do not miss one of these valuable posts or other resources covering PBL, Digital Curriculum, Web 2.0, STEM, 21st century learning, and technology integration, please sign up for 21centuryedtech by email or RSS. As always, I invite you to follow me on twitter (@mjgormans). Mozaik Digitális Oktatás Your cart is empty Shop Quantity: 0 ‎Logarithms on the App Store (Logaritmussal való számolást, aznosságokat gyakoroltató program, angol nyelvű, de nem kell komoly tudás) • App to learn LOGARITHMS. • The app creates equations and expressions and SHOWS THE COMPLETE SOLUTION !!! • The expressions and equations are ALWAYS DIFFERENT (based on random numbers). • An ideal tool for the study of mathematics in secondary schools and technical schools. • It is also possible to learn the logarithm laws (simplify and expand expressions). Fundamental to be able to solve the equations.

Factor Monsters - Apps on Google Play Get ready to factor and fight in this cool new math game! Learn how to factorize while fighting monsters! Protect your house using your math skills to fight off monsters. Photomath - Apps on Google Play Learn math, check homework and study for upcoming tests and ACTs/SATs with the most used math learning app in the world! Got tricky homework or class assignments? Get unstuck ASAP with our step-by-step explanations and animations. Photomath is free and works without wi-fi or data. Whether you’re on the bus, in a cave, or just offline, core Photomath is always available.