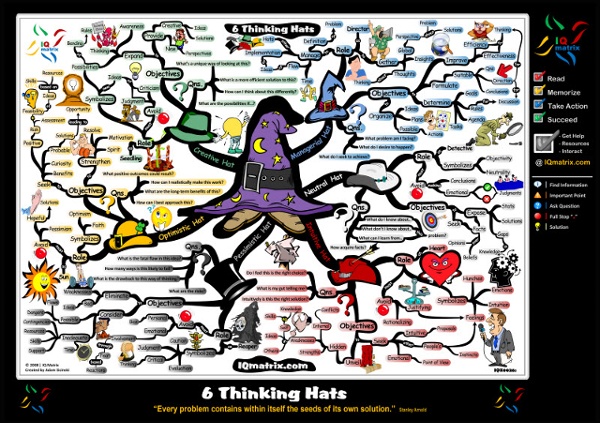 6 Thinking Hats - Bono de, Edward The Six Thinking Hats technique (6TH) of Edward de Bono is a model that can be used for exploring different perspectives towards a complex situation or challenge. Seeing things in various ways is often a good idea in strategy formation or complex decision-making processes. The 6TH technique is designed to help individuals deliberately adopt a variety of perspectives on a subject that may be very different from the one that they might most naturally assume. In wearing a particular thinking hat, people play roles, or "as if" themselves into a particular perspective. Each of the Hats is named for a color that is mnemonically descriptive of the perspective one adopts when wearing the particular hat. The 6 hats and the perspectives they represent are: De Bono’s hats are indicative of both emotional states as well as frames of mind (i.e., perspective from which an issue is viewed). Main benefits of the 6TH method: Using the Six Hats More management models

The de Bono Group - Six Thinking Hats Used with well-defined and explicit Return On Investment success in corporations worldwide, Six Thinking Hats is a simple, effective parallel thinking process that helps people be more productive, focused, and mindfully involved. A powerful tool set, which once learned can be applied immediately! You and your team members can learn how to separate thinking into six clear functions and roles. Each thinking role is identified with a colored symbolic "thinking hat." By mentally wearing and switching "hats," you can easily focus or redirect thoughts, the conversation, or the meeting. Using Six Thinking Hats®, you and your team will learn how to use a disciplined process which will... Significant Applications for the Parallel Thinking Process of Six Thinking Hats Introducing The de Bono Group Leader's Package Two highly engaging de Bono Group resources bundled together for optimized team learning Read more about Six Hats Online Here Click here for Return on Investment results!

Brainstorming The Brainstorming (brainstorm) method is a semi-structured creative group activity, used most often in ad-hoc business meetings to come up with new ideas for innovation or improvement. Members of the group are encouraged to put forward ideas about a problem and how it may be solved, in order to generate as many ideas as possible, even if they are not always usable alternatives. The idea behind brainstorming is, that a group of people can achieve a higher (synergy) level of creativity than the sum of the participants separately. Brainstorming Rules Three major rules for a successful brainstorm session are: Participants should be encouraged to come up with as much ideas as possible, however strange they are (there are no bad ideas). Brainstorming hints Some hints for a successful brainstorm session are: Use an experienced facilitator. The effectiveness of brainstorming Book: Michael Michalko - Thinkertoys (A Handbook of Business Creativity) - More Management Methods, Models and Theory

Six Thinking Hats Six Thinking Hats is a book by Edward de Bono which describes a tool for group discussion and individual thinking involving six colored hats. "Six Thinking Hats" and the associated idea parallel thinking provide a means for groups to plan thinking processes in a detailed and cohesive way, and in doing so to think together more effectively.[2] Underlying principles[edit] The premise of the method is that the human brain thinks in a number of distinct ways which can be deliberately challenged, and hence planned for use in a structured way allowing one to develop tactics for thinking about particular issues. de Bono identifies six distinct directions in which the brain can be challenged. Since the hats do not represent natural modes of thinking, each hat must be used for a limited time only. A compelling example presented is sensitivity to "mismatch" stimuli. Six distinct directions are identified and assigned a color. Managing Blue - what is the subject? Strategies and programs[edit]

de Bono for Business Synectics Synectics is a problem solving methodology that stimulates thought processes of which the subject may be unaware. This method was developed by George M. Prince (April 5, 1918 - June 9, 2009)[1] and William J.J. Gordon, originating in the Arthur D. Little Invention Design Unit in the 1950s. History[edit] The process was derived from tape-recording (initially audio, later video) meetings, analysis of the results and experiments with alternative ways of dealing with the obstacles to success in the meeting. The name Synectics comes from the Greek and means "the joining together of different and apparently irrelevant elements Gordon and Prince named both their practice and their new company Synectics, which can cause confusion as people not part of the company are trained and use the practice. Theory[edit] Synectics is a way to approach creativity and problem-solving in a rational way. According to Gordon, Synectics research has three main assumptions: Books[edit] See also[edit] References[edit]

50 Life Secrets and Tips Memorize something everyday.Not only will this leave your brain sharp and your memory functioning, you will also have a huge library of quotes to bust out at any moment. Poetry, sayings and philosophies are your best options.Constantly try to reduce your attachment to possessions.Those who are heavy-set with material desires will have a lot of trouble when their things are taken away from them or lost. Possessions do end up owning you, not the other way around. Become a person of minimal needs and you will be much more content.Develop an endless curiosity about this world.Become an explorer and view the world as your jungle. Read “Zen and the Art of Happiness” by Chris Prentiss.This book will give you the knowledge and instruction to be happy at all times regardless of the circumstances. Wouldn’t it be awesome if you could boldly display 50 life secrets and tips on your wall to serve as a beautiful, daily reminder of how to live a Higher Existence?

Six Thinking Hats Category:Creativity Techniques This A to Z of Creativity and Innovation Techniques, provides an introduction to a range of tools and techniques for both idea generation (Creativity) and converting those ideas into reality (Innovation). Like most tools these techniques all have their good and bad points. I like to think of these creativity and innovation techniques as tools in a toolbox in much the same way as my toolbox at home for DIY. It has a saw, spanner, hammer, knife and all sorts of other things in it, they are all very useful, but you have to pick the right tool (creativity / Innovation technique) for each job. For the future, the aim is to also have sub-categories which will identify Techniques for; Problem Definition - including problem analysis, redifinition, and all aspects associated with defining the problem clearly. Special thanks to the Open University for their kind permission to use material from their publication B822. Subcategories This category has the following 5 subcategories, out of 5 total.