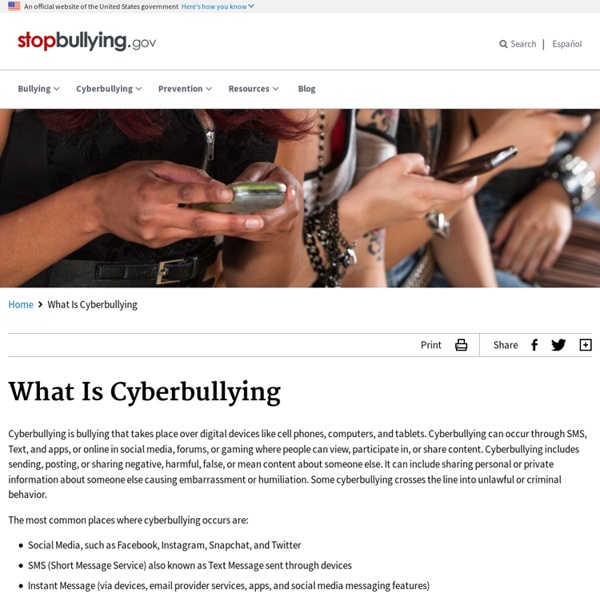 Cyberbullying is bullying that takes place over digital devices like cell phones, computers, and tablets. Cyberbullying can occur through SMS, Text, and apps, or online in social media, forums, or gaming where people can view, participate in, or share content. Cyberbullying includes sending, posting, or sharing negative, harmful, false, or mean content about someone else. It can include sharing personal or private information about someone else causing embarrassment or humiliation. Some cyberbullying crosses the line into unlawful or criminal behavior. The most common places where cyberbullying occurs are: Social Media, such as Facebook, Instagram, Snapchat, and Twitter SMS (Short Message Service) also known as Text Message sent through devices Instant Message (via devices, email provider services, apps, and social media messaging features) Email Special Concerns Permanent – Most information communicated electronically is permanent and public, if not reported and removed. Special Concerns

Cyberbullying: What Is It and How to Stop It – @CallerSmart Cyberbullying affects countless teens and adolescents. A 2015 random sample study of 11-15 year olds in the Midwest found that over 34% reported being the victim of cyberbullying in their lifetime. Other studies have found that 1 in 4 teens have been cyberbullied.

Basic Internet Safety Learning to recognize the warning signs of these risks will allow trusted adults to intervene and lessen potential negative impacts. By acting as a resource, parents and guardians can help make the Internet a safer place for their families. As a parent or guardian, you should stay well-informed about current issues to understand what your children are experiencing on and off the Internet. Cyber-Bullying and its Effect on our Youth Between texting, social media, and online gaming, many children spend more time engaging online than they do interacting in person. As technology continues to revolutionize the way we communicate, it also presents new areas of concern. Even though it may not take place in person, the emotional and psychological effects of online bullying are just as destructive as physical and verbal bullying, according to Jennifer N.

Safe Internet – Internet Piracy & Infringement We are all familiar with the term piracy and its original historical meaning, which was basically a description used for robbery with violence at sea by pirates. In our digital modern world, internet piracy is a new form of robbery, without the violence, but with the same consequences as its seafaring predecessors. Internet piracy is the term used to describe acts of copyright infringement, which is basically theft, but more complicated than that in the eyes of the law. Raising Social Media Teens Means Constant Parental Learning : All Tech Considered The Ask.fm website has been linked to two bullying cases that led to suicides. Danny E. Martindale/Getty Images hide caption toggle caption 8 digital skills we must teach our children The social and economic impact of technology is widespread and accelerating. The speed and volume of information have increased exponentially. Experts are predicting that 90% of the entire population will be connected to the internet within 10 years. With the internet of things, the digital and physical worlds will soon be merged. These changes herald exciting possibilities.

Copyright Exposed (Taking the Mystery Out of Copyright) Download the Adobe Flash Player to view this video. Copyright Exposed is a short video of Cop E. Wright telling a group of teens the basics of U.S. Copyright Law. In order to view this video you will need the latest version of the Adobe Flash Player installed. Internet Piracy Megan Ptak, Wylder Tallman, Derek Holbrook, Maria DiPilato, Jaime McGrath 11 December 2017​ Intro to Communication & Media Dr. Sylvia​​ What Happens When The Cyberbully Is A Child With Special Needs : All Tech Considered Children with special needs often feel targeted by peers at school. Social media can be a powerful tool to fight back. Martin Dimitrov/Getty Images hide caption toggle caption Learn To Say Sorry If You Want To Repair Your Internet Reputation As a business, when you do something wrong, there are two ways to deal with the situation. You can either blame the customer, or apologise. Blaming is not good for the relationship the two of you share. You must say sorry. And that’s exactly what internet reputation repair is about – saying sorry. Don’t apologise for the