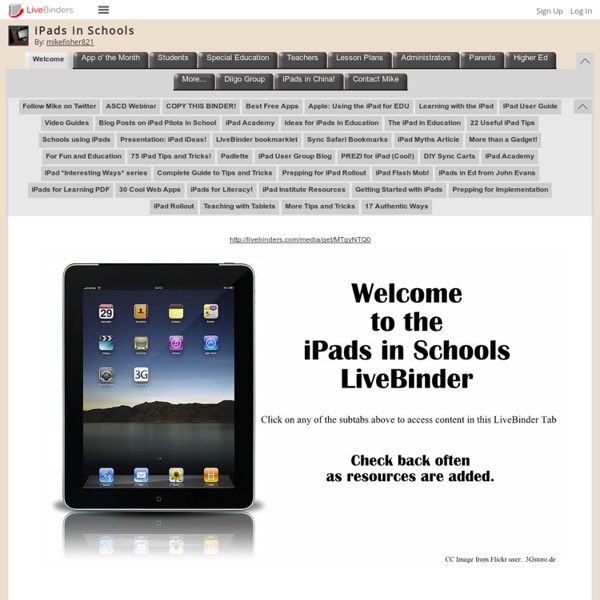 Webmix Wednesday: Apps for the One iPad Classroom Recently, I was asked for app recommendations for a one iPad classroom. After compiling several recommendations, I decided this would be a perfect fit for a Symbaloo webmix! I'm sure there are other apps I might add, but these were some of the first that came to mind. Texting with Activexpressions Today BrainPOP was visited by one of Promethean’s super-talented TLC’s, Ben Posner. Ben showed us Promethean’s new Activexpression devices and helped us brainstorm ways to use them with BrainPOP. Activexpressions are Student Response Systems, or SRS devices. If you’re not familiar with SRS devices, they allow teachers to get instant feedback on what each student knows or has to say. Newer SRS devices allow students to respond in a variety of ways; the Activexpression devices even allow students to text short answers with a mobile-phone like design. One topic we explored was how students could use SRS devices like Activexpression to write collaboratively.

Delta Teacher Development Series - Going Mobile Teaching with hand-held devices Key features Going Mobile was shortlisted for the 2015 ELTons Innovation in teacher resources category! New from the multi-award-winning Delta Teacher Development Series! Going Mobile is available as both paperback and e-book. The e-book is available in the Kindle store where you can download the free Kindle reading app for every major smartphone, tablet, and computer. Apple TV I've been testing out an Apple TV in my classroom for the past few weeks now to see how the mirroring function with the ipad2 could work. My impressions so far have been very positive. Things I like: -Wireless connection has been good (for the most part), sometimes I'm kicked off due to wireless issues, but this is pretty minimal -Students can connect their ipads to the apple tv (I currently have it password protected) and share work, which is super cool! -When using the camera app on the ipad, you have a portable document camera! -It is nice to be able to demonstrate apps to students with full video and audio without being tethered to a cord! -Cost--at only $99, plus a $40 VGA adapter to hook into the projector and some audio cables, its very cost efficient!

50 really useful iPad 2 tips and tricks An absolute gem of an article by John Brandon and Graham Barlow from MacLife on 30th March over at TechRadar. This is going to become my iPad manual from here on in. Customised iPads for all iPad 2 tips and original iPad tips - get 'em here! With great new features like two video cameras, a faster processor and a thinner design, the iPad 2 is the world's best tablet device. iPad 2 review 70 iPad Apps for Elementary STEM Update 8/30/2014: Somehow duplicate entries found their way into my app list. Thanks to a tweet from @kiboser I removed them, so the list now includes 70 apps. I also added 3 paid apps I’m going to purchase via VPP this fall: Green Screen by Do Ink, Do Ink Animation & Drawing, and Stick Around.

3rd - Mrs. Deborah Burke / Social Studies Symbaloo Skip to Main Content District Home Select a School... Teaching the Essential Skills of the Mobile Classroom Think back 20 years. Pay phones still worked, and only doctors carried pagers. Laptops weighed as much as bowling balls, and few of us had Internet access. In fact, much of what we now consider commonplace -- Google, email, WiFi, texting -- was not even possible. If that was 20 years ago, where are we going in the next 20?

FINALLY! An iPad Photo Portfolio App I Like – Photo Manager Pro 3.2.4 I’ve tried literally dozens of photo apps for the iPad intended to help me manage my photos. I use the iPad primarily as a photo portfolio. I’ve mostly relied on the supplied photo app that comes with the iPad from Apple. But to say that app is lacking is an understatement. You’d think it’s very easy to come up with a simple portfolio app that is fast, powerful, convenient, easy to use and intuitive. Apparently that is not the case. 50 really useful iPad tips and tricks With great new features like two video cameras, a faster processor and a Retina display, the new iPad is the world's best tablet device. It's also fully capable of running the latest version of Apple's iOS operating system and great apps like iMovie and GarageBand. Here we present 50 really useful iPad tips. We cover everything from customising your Home screen through to getting more from built-in apps like Mail and Safari.

EdTech Hidden Gems of 2014 At Common Sense Graphite, we get to know the tools we review well. When great stuff comes across our desks, we try to champion it because we want teachers out there using the best of the best in edtech. Sometimes, though, the tools we like get a bit lost in the mix alongside heavy hitters like Pearson, Khan, and Google. Here's a list of some tools we've reviewed this year that we'd love to see in the hands of more teachers.