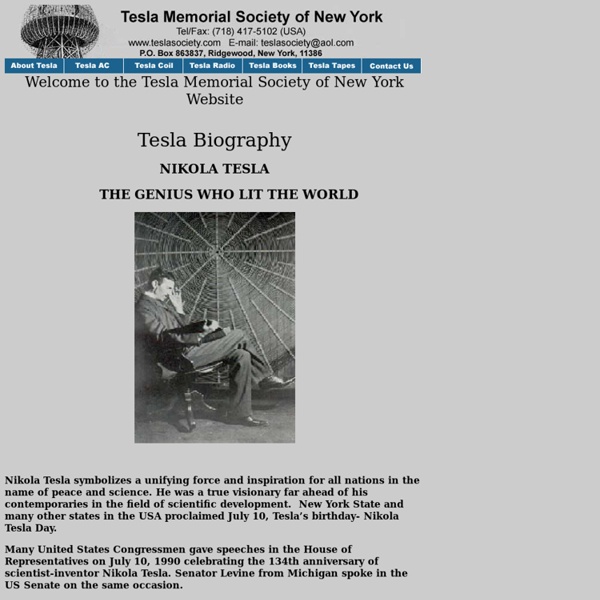 Tesla Biography Nikola Tesla symbolizes a unifying force and inspiration for all nations in the name of peace and science. He was a true visionary far ahead of his contemporaries in the field of scientific development. Many United States Congressmen gave speeches in the House of Representatives on July 10, 1990 celebrating the 134th anniversary of scientist-inventor Nikola Tesla. The street sign “Nikola Tesla Corner” was recently placed on the corner of the 40th Street and 6th Avenue in Manhattan. Nikola Tesla was born on July 10, 1856 in Smiljan, Lika, which was then part of the Austo-Hungarian Empire, region of Croatia. Young Nikola Tesla came to the United States in 1884 with an introduction letter from Charles Batchelor to Thomas Edison: “I know two great men,” wrote Batchelor, “one is you and the other is this young man.” Tesla pointed out the inefficiency of Edison’s direct current electrical powerhouses that have been build up and down the Atlantic seaboard. century. -Dr.

drill here drill now Tesla Wardenclyffe Project Nikola Tesla Nikola Tesla (Serbian Cyrillic: Никола Тесла; 10 July 1856 – 7 January 1943) was a Serbian-American[3][4] inventor, electrical engineer, mechanical engineer, physicist, and futurist who is best known for his contributions to the design of the modern alternating current (AC) electricity supply system.[5] Born and raised in the Austrian Empire, Tesla received an advanced education in engineering and physics in the 1870s and gained practical experience in the early 1880s working in telephony and at Continental Edison in the new electric power industry. He emigrated to the United States in 1884, where he would become a naturalized citizen. Attempting to develop inventions he could patent and market, Tesla conducted a range of experiments with mechanical oscillators/generators, electrical discharge tubes, and early X-ray imaging. Early years Rebuilt, Tesla's house (parish hall) in Smiljan, now in Croatia, where he was born, and the rebuilt church, where his father served. Working at Edison

Government Employee Salaries Salary Range ($1000s) Find the annual base salaries of more than 674,000 public employees, including those working at the largest state agencies as well as individual universities, public schools, cities and mass-transit operators. Find salaries by searching for names, or by browsing for a specific agency or job title. Read more about this data, and send us any questions, comments or corrections. To see a list of every agency available, click here. + More

Letterheady Nikola Tesla - The Complete Patents of Nikola Tesla - The Man who invented the 20th Century The Complete Patents of Nikola Tesla Edited by Jim Glenn ( This is a Must Have Book for Inventors ! ) Tommy C Barnes & Noble Books New York ISBN 1566192668 1994 by Barnes & Noble Inc. Nikola Tesla's Automobile Nikola Tesla, the "man who invented the twentieth century," was born July 10, 1856, at Smiljan, Lika province (in modern Croatia), a part of the expiring Empire of AustroHungary. As a child Nikola manifested a full share of Duka's ingenuity, building among other things a bugpropelled engine. He entered the Polytechnic College of Graz in 1875, studied hungrily, but for lack of funds was unable to complete his second year. Already at Graz he knew that electricity would be his life's fascination. He did emigrate and he did go to work for Edison, but for less than a year, until the fee promised for a particularly difficult project, redesign of an Edison dynamo, failed to materialize. Tesla was" in any case, a natural showman. A 1902 venture, with J. Marconi v.

obomas get ritch quick scheem Start Educating Entrepreneurs, Not Employees I’ve been back from CES for a couple of days now (read all of our coverage here). After clearing out my inbox and racking my brain about a wrap-up post for the event, it finally occurred to me why it was that I’ve had such a hard time in finding a topic — I’m just not impressed. In fact, I’m mildly depressed by what I saw, and further to that point, I’m bothered by what it means. Let me explain — CES is supposed to be where the biggest and brightest ideas of the upcoming year in consumer electronics are shown. Instead, there are maybe 10 or 15 things that are truly unique (and maybe 6 that you’ll care about) but there are thousands that are copycat, lowest-common-denomonator examples. The issue at hand is that the problems start from a very young age. For two weeks previous to my trip to CES, my 7 and 9 year old kids were here with me. But then he fires the thing up and shows me his favorite feature – a book that reads to him. No, I’m not kidding. Why teach like this?

Acheron LV-426 New York Times - Linked Open Data Kickstart a Nikola Tesla docudrama Nicola Tesla has some pretty cool connections with comics, from a starring role in Matt Fraction's Five Fists of Science to creating Atomic Robo. He also had a pretty great appearance in Dark Horse's Tarzan: Le Monstre. The world's greatest, real-life, mad scientist was an awesome, inspiring person and probably my favorite bits of The Prestige were the parts with him as played by David Bowie. Though geeks everywhere know and appreciate Tesla and his many accomplishments, documentary TV producer Wil Cashen points out that the inventor has still never gotten his just, historical acclaim. A $30 pledge gets you a digital download of the movie when it's done, but there are a lot of other rewards at other levels, so check out the site and see what appeals to you.