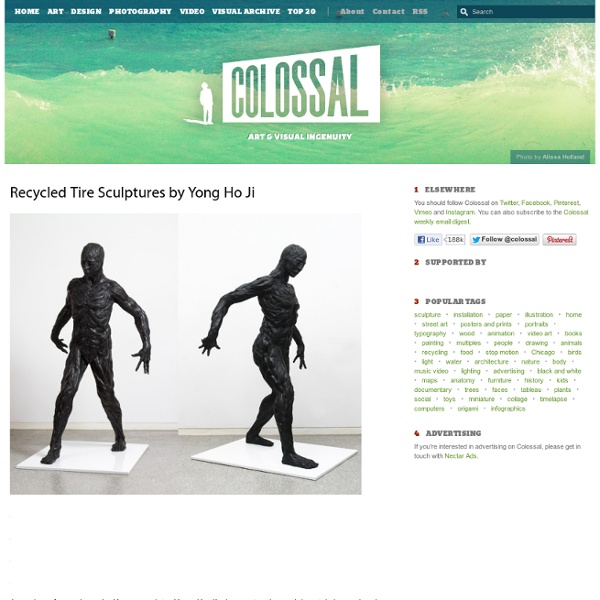 A number of new pieces by Korean sculptor Yong Ho Ji who creates these elaborately layered and textured sculptures using shreds of recycled automobile tires. (via this isn’t happiness) Traveling this week so posting will be regrettably light.

Conceptual Nazgûl Armour Page Raven Bones Cuirass The winter of 2009 saw a bird other than the phoenix rise from the flames. The Raven bone cuirass was wrought with wing and skull motifs, continuing the theme of grotesque gothic armour wickedly. The back plate features a folding wing enclosure with a separate back plate held tight by leather belts. Witch King Battle Arms, WK Gauntlets, NAZ legs with cloven sabatons In the summer of 2007 the coals burned red during the early morning hours long before the heat of the sun could punish the lands in order to produce this 'grotesque' armour set. Deeply cloven sabatons denote a most unusual creature beneath. Details of the 'Hell Bent' conceptual Nazgul armour set The first month of 2006 brought the opportunity to keep the forge fires hot, despite the cold, snow covered lands. The Hell Bent set features details evolved from the earlier 'Dragon and Tower' set (shown further below). This was the second conceptual armour set to be realized following our 'eye' set.

How simple things can soften up boring fences | SkitZone Is there anything more boring than fences? Cold and gray iron fences or three planks placed after one another. So it is just brilliant that someone has taken something so boring and made it look interesting. That someone is Dutch design house Demakersvan, and they have called this project The Lace Fence. The metal fences that they have been using are now shaped like flowers. « 17 Interesting Facts About Feet (Infographic) Life and Death of a One Dollar Bill (Infographic) » admin On November - 7 - 2010 Hyper-Realistic Rubber: Tire Sculpture by Yong Ho Ji Whenever I take road trips, I often notice the hulking shreds of stripped semi tires laying around, and I’ve always thought two things: one, they look almost organic- like they’re actually the carcasses of some prehistoric animal that blundered its way onto the highway, and two- that that animal must have been damn ugly. But when I saw a tire sculpture by Yong Ho Ji the other day, I realized I was pretty wrong about the hideous part. He reassembles strips of old tires with resins and screws into gorgeous creatures with predatory stances and sinuous movement. We love our cars, so seeing tires re-purposed after their regular lifespan into perfect manly sculptures is totally bad ass. It’s the macho trifecta: hang one of these rubber animal busts on the wall, and you get the appearance of being an awesome trophy hunter without actually killing any animals, you’re saving the planet by recycling, and your sculpture isn’t some sissy flowers or soapstone carved by a three year old.

Mosaics By Sandhi Schimmel | Cretive Design Art Photos and Artworks Artist Sandhi Schimmel created a magnificent series of portraits of spam – advertising, calendars, photos, greeting cards and other mail. It turns out that the contents of your mailbox may also be useful for creative experimentation. The Tire Art of Wim Delvoye For his series titled "Pneu", Belgian artist Wim Delvoye created a series of decorative objects by hand-carving intricate patterns and floral motifs on used car tires. Through his manipulation of found objects, Delvoye transforms things that seem useful in everyday life into sculptural pieces that carry a different value from their original intended purpose. Delvoye calls his own approach to art ‘glocal’, referring to ‘local’ and ‘global’, which is his own ironical way of describing art. Find out more about Wim's work here.

Browser not supported Drawing Autism is an incredible collection of artwork by people diagnosed with autism, from teenage amateurs to established artists. Unlike many of the books I feature on 50 Watts, this one is in print. You should buy it. This post features a small selection of my favorite images from the book, along with some quotes by the artists. Publisher's description: Over the last decade autism spectrum disorder (ASD) has become an international topic of conversation, knowing no racial, ethnic, or social barriers. Donna Williams, The Outsider What was the inspiration for this piece? "The Outsider" is about joining in from the periphery. An excerpt from the artist's answer to the question, "At what age did the act of creating art enter into your life? I was deeply mesmerized with all things aesthetic and sensory from at least 6 months of age. Felix: Imaginary City Map, Age 11 What was the inspiration for this piece Generally I start drawing one street on different spots on the edge of my paper. None.