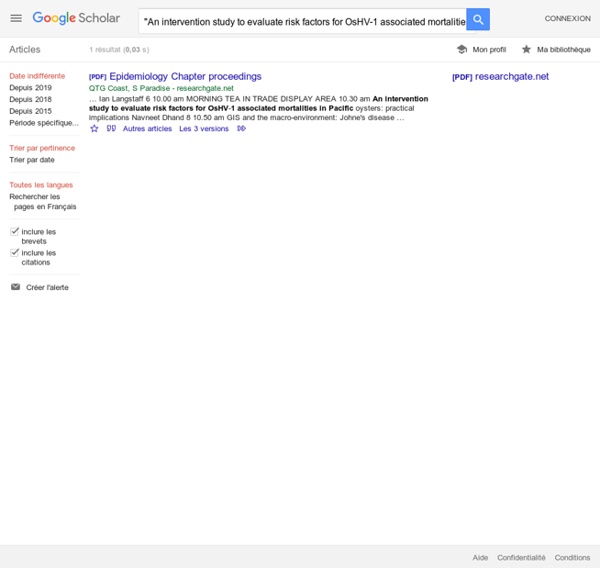 FRONT. VET. SCI. 26/03/19 Negotiated Management Strategies for Bovine Tuberculosis: Enhancing Risk Mitigation in Michigan and the UK Introduction Bovine tuberculosis (bTB) is principally a disease of cattle, but there are several places worldwide where free-ranging wildlife are reservoirs of infection, namely brushtail possums in New Zealand, European badgers in the United Kingdom, wood bison and elk in Canada, African buffalo in South Africa and white-tailed deer in the United States (1). Where the disease has become established, it can have considerable economic consequences for livestock keepers and poses challenges for national governments and agencies in devising a workable and socially acceptable eradication plan.

SPRINGER 01/04/18 Disease detection, epidemiology and outbreak response: the digital future of public health practice Individual data that is aggregated into health statistics and collected routinely is a major part of indicator-based surveillance: the standard approach to epidemiological surveillance as practiced traditionally by health scientists at local, regional, and national health agencies and public health departments. The methods commonly employed to conduct indicator-based surveillance have been widely validated and provide an established way to conduct official, continuous surveillance using reliable data for epidemiology (Velasco 2014). Because information often flows through official channels, personal data is often protected by agencies who usually comply with verified channels and are accountable to ensure privacy for individuals within a population.

SCIENCEMADIACENTRE (UK) 13/11/18 expert reactions to an independent review on the bovine TB strategy November 13, 2018 Reactions to an independent review on the bovine TB strategy as published by Defra. Prof Malcolm Bennett, Professor of Zoonotic and Emerging Disease, University of Nottingham, said: Life Sciences, Society and Policy December 2018, Individuals on alert: digital epidemiology and the individualization of surveillance Life Sciences, Society and Policy December 2018, Is there a duty to participate in digital epidemiology? Digital epidemiology promises exciting new insights into the occurrence and spread of diseases, into human behavior, into personal characteristics, and into the correlations among them. Its main goal is to detect health or security threats worldwide, in real time, rooted in the mining of online data, including personal data from social media and even information on health behaviors and health attitudes. In contrast to classical epidemiology that relied on reports from health experts, digital epidemiology draws on data that have been self-produced and usually for other purposes. The innumerable traces that people leave from their myriad activities online—from searching for information to Facebook posts—comprise its raw material.

FRONT. VET. SCI 03/05/18 Bovine tuberculosis in Britain and Ireland – A Perfect Storm? The confluence of potential ecological and epidemiological impediments to controlling a chronic infectious disease. 1Agri Food and Biosciences Institute, United Kingdom Successful eradication schemes for bovine tuberculosis (bTB) have been implemented in a number of European and other countries over the last 50 years. However, the islands of Britain and Ireland remain a significant aberration to this trend, with the recent exception of Scotland.

Healthc Inform Res. 31/10/18 Digital Epidemiology: Use of Digital Data Collected for Non-epidemiological Purposes in Epidemiological Studies Hyeoun-Ae Park, PhD, FAAN, FACMI, RN,Hyesil Jung Jeongah On, RN,Seul Ki Park, RN and Hannah Kang, MSN, RN College of Nursing, Seoul National University, Seoul, Korea. Corresponding Author: Hyesil Jung, MSN, RN. THE INDEPENDENT 10/06/14 The smartphone app that could save Britain’s bees Members of the public are being urged to record bee sightings to help scientists see how the insects are faring. The charities Friends of the Earth and Buglife, together with retailer B&Q, have developed a free smartphone app that helps users to identify the bees they see and log sightings while they are out and about. There is currently no accurate picture of the state of the UK’s bees but there are concerns about severe declines in populations in recent years. More than 20 species are already extinct and about a quarter of the remaining 267 bee species are at risk. The Great British Bee Count’s results will be published in the autumn and the organisations hope it will help to inform action taken by the Government as part of its “national pollinator strategy” for protecting bees and other insects. The Great British Bee Count phone app can be downloaded from the App Store and Google Play.

BMC INFECTIOUS DISEASES 13/08/18 Using Baidu index to nowcast hand-foot-mouth disease in China: a meta learning approach Hand, foot and mouth disease (HFMD), usually caused by enterovirus 71 (EV71) and coxsackievirus A16 (Cox a16), is a type of infectious disease that occurs most commonly among children under 5 years old [1, 2, 3, 4]. The typical symptoms of HFMD patients include fever, skin eruptions on hands and feet, and vesicles in the mouth. HFMD can cause mild to severe illness. CATTLE HEALTH 27/11/16 New industry-led scheme will help farmers across England and Wales avoid the effects of bovine TB A new industry-led cattle health programme to evaluate risk and recognise farmers who step up biosecurity to help control bovine TB (bTB), launches today on a dairy farm at Iron Acton near Bristol. CHeCS bTB Herd Accreditation, a voluntary scheme which has been welcomed by Farming Minister George Eustice and Welsh Government Cabinet Secretary for Environment and Rural Affairs Lesley Griffiths, improves a herd’s ‘score’ every year it is free from a bTB breakdown, awarding a status of 0-10. The scheme is run by Cattle Health Certification Standards (CHeCS), which was established in 1999 by the cattle industry to set standards for the control and eradication of endemic diseases. This new bTB scheme will require the herd vet and cattle owner to work together on following a number of biosecurity measures already successfully implemented in five other cattle disease control programmes.

DEFRA 15/07/16 Bovine TB epidemiology reports, 2015. These are detailed epidemiological reports covering the low bovine TB risk areas and the edge areas of England. These provide cattle keepers, and others, with a clear and detailed analysis of the bovine TB situation in their area. The reports pull together statistics on new and ongoing bovine TB breakdowns in England at county level and include: an assessment of local risk factors which may contribute to TB incidents an overview of the developing situation regarding potential levels of recurring TB infection of the disease in each county PLOS 05/08/19 Kankanet: An artificial neural network-based object detection smartphone application and mobile microscope as a point-of-care diagnostic aid for soil-transmitted helminthiases Abstract Background Endemic areas for soil-transmitted helminthiases often lack the tools and trained personnel necessary for point-of-care diagnosis. This study pilots the use of smartphone microscopy and an artificial neural network-based object detection application named Kankanet to address those two needs.