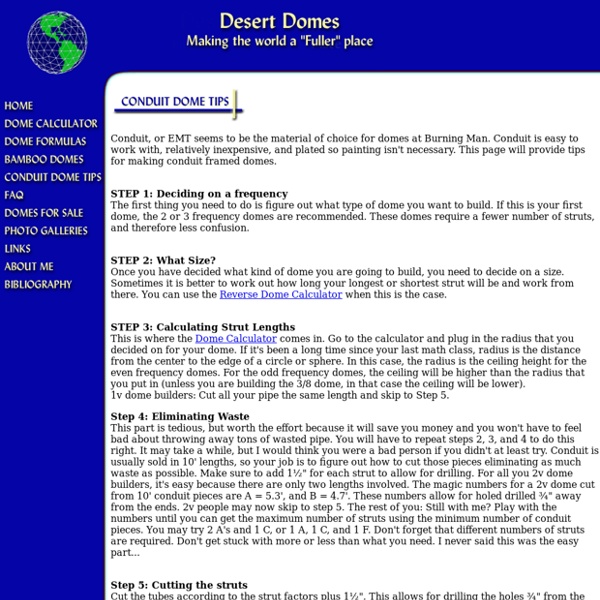 Conduit, or EMT seems to be the material of choice for domes at Burning Man. Conduit is easy to work with, relatively inexpensive, and plated so painting isn't necessary. This page will provide tips for making conduit framed domes. STEP 1: Deciding on a frequency The first thing you need to do is figure out what type of dome you want to build. If this is your first dome, the 2 or 3 frequency domes are recommended. These domes require a fewer number of struts, and therefore less confusion. STEP 2: What Size? STEP 3: Calculating Strut Lengths This is where the Dome Calculator comes in. Step 4: Eliminating Waste This part is tedious, but worth the effort because it will save you money and you won't have to feel bad about throwing away tons of wasted pipe. Step 5: Cutting the struts Cut the tubes according to the strut factors plus 1½". STEP 6: Flattening the ends OK, there are a few ways to do this part. Step 8: Bending the Struts Now the struts need to be bent to the correct angles. Related:  geodesic domes

Build your own Bamboo Domes This is page 95 of "Domebook Two", a book that was published in the 70's and is very hard to find. It was written by Pacific Domes (not the same as Pacific Domes), and I was able to find it at the local library. Bamboo grows fast, is free material for a dome framework. It might be possible to suspend a tent skin or mosquito netting inside, or pull a stretch cloth over the outside and shoot foam. Tools: a pocket knife and string. The following instructions were prepared by R. Dome Assembly The geodesic dome, as shown in the assembly diagrams, contains two different joints: a B joint which occurs at the vertices of all pentagons formed, and an R joint which occurs at all other points. Cutting and Measuring the Members There are only two different lengths of members used in the erection. For a 5/8 dome, 80 B members and 90 R members are required. A line of color can be drawn around the bamboo members at each measuring point. Cross Assembly Cross Tying Stage 1 Assembly Stage 2 Assembly Prop It

Magical Dome House in Remote Thailand Constructed in Six Weeks for Just $8000! When most people imagine their dream home, they probably think of a large, sprawling vacation house that cost hundreds of thousands of dollars. When Steve Areen thought about building his dream home, all he had to do was find $8,000 and a place to build. He did just that and, in a few weeks, he had a vacation home in the middle of Thailand that could make anyone drool. Steve was given a place on his friend Hajjar Gibran’s mango grove to build his home. With a Thai friend’s guidance, his son-in-law’s masonry skills and a lot of work, the team made progress quickly.

Sustainable Domes - Geodesic Dome - Aquaponics Domes :: Home Frameless Geodesic Dome What is it? It’s a frameless geodesic dome designed to be easy to fabricate and build. It is 18 feet wide at the widest point and about 13 feet tall. It feels very spacious for it’s 209 square foot floor. The dome shell is built out of 3/16” corrugated plastic and 3/4” blueboard foam insulation. There is no frame in this dome. The dome has a radial 2x4 floor system held up by cinder blocks. It has electricity and is heated with a single electric radiator and is cooled with an exhaust fan and small window sized air conditioner. The materials are all easily attainable and it cost about $2100 to build it at the time. The dome shell is also extremely easy to disassemble making it a portable structure. Hacking housing If I want to spend my time writing blog posts, exploring new programming languages, and other things that I want to do but I am unlikely to get paid for, it’s helpful to opt out of certain common expenses. Advocacy The short construction time of this dome is remarkable. Solar gain

Geodesic Dome Diary written by Rene K. Mueller, Copyright (c) 2007, last updated Tue, November 4, 2008 As I proceed I will update the diary. Most up-to-date entry at top, first and oldest entry at the bottom respectively last page. It has been almost a year since I pondered on the connectors for bamboo, because it seems it wasn't that easy to find something suitable. At Bamboocraft.net has been a discussion with different approaches, yet, none really is convincing. Discussing with a friend of mine, who is a locksmith, brought up this design as the illustration shows, using a special foaming glue. The glue, named "Fermacell 59010", is slightly foaming or expanding and seals the 1-2mm gap seamlessly - as a few tests have shown: One bamboo I cleared using a cutter to remove the glue and see small bubbles, whereas the other the overflowing glue remained as comparison. I hope to keep the light bamboo as struts, but find more stable or rigid connectors. So I'm back in the yurt again. Update 2007/12/14: CONBAM.de Moving

Pacific Domes New construction technique allows concrete domes to be "popped up" There probably aren't many domed concrete structures where you live, and there's a reason for that – they're difficult to build. Doing so usually requires the construction of a supporting wooden structure, that holds the concrete in place while it hardens. Now, however, a team at the Vienna University of Technology has devised a system that allows concrete shell structures to simply be "inflated" and cinched together with a steel cable. View all Called the pneumatic wedge method, the technique has been likened to peeling an orange and lying its skin flat on a table – except in reverse. First, a number of flat rebar forms are laid out side-by-side on the ground at the building site, on top of a deflated plastic air cushion (see the photo below). Next, the dome-shaped air cushion is inflated. Once the shell is up, the air cushion is deflated and removed, and the beams and cable are taken off. Source: Vienna University of Technology Share

Domebuilder's Blues Buckminster Fuller didn’t invent the geodesic dome. The first guy who stitched together a soccer ball did. Soccer balls are made up of the same configuration of hexagons and pentagons. Just take a soccer ball and cut it in half — in your mind’s eye, anyway — and you’ve got the basic design. As a matter of fact, the plutonium core of a nuclear weapon is put together exactly the same way. To build a dome, you invite a bunch of friends and relatives who aren’t fast enough on the draw to think of an excuse for not pitching in, lay in a load of food and a keg of beer, and you sling up this kit, using a 3-stage, 15-foot scaffolding and 9/16" ratchet wrenches. At 7 a.m., there’s nothing there but a foundation. That’s as far as you get with the dome kit: a plywood shell. The floor plan is nearly circular. Somewhere along the line, you also discover that contractors like working on domes the way they like having double pneumonia. George Oakes sent us this article in 1981. Insulation Plumbing