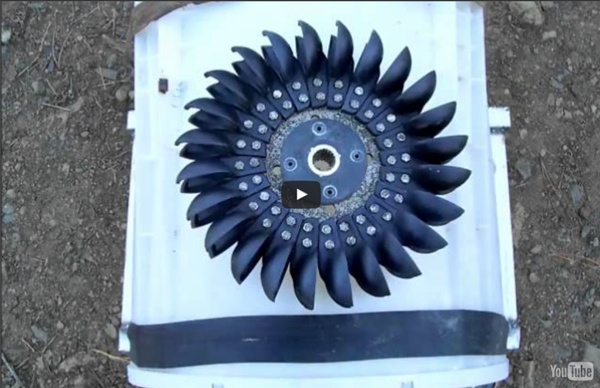 Plan your build Before you start cutting into your own grape juice containers and sealing be sure it fits in your car. Find a spot to cram your plastic container into. It needs to be away from direct conact to the motor. Near the battery or air filter is preferable. I got lucky that my battery is directly beside my air filter and there is a huge space under the air intake piping. Build an Amazing Tesla CD Turbine Build a real working turbine from recycled CD's! This Tesla CD Turbine is based on the Tesla turbine, which was invented by Nikola Tesla in the early 1900's. Tesla's pumps and motors were unique in that they only used discs, and took advantage of the boundary layer effect. 7th Grader mimics Nature 13 year old copies Nature to Improve Solar Performance Thirteen year old Aidan Dwyer was walking in the woods in Upstate New York in the winter and noticed a spiral pattern to tree branches. Aidan realized the tree branches and leaves had a mathematical spiral pattern that could be shown as a fraction. After some research he also realized the mathematical fractions were the same numbers as the Fibonacci sequence. "On the oak tree, the Fibonacci fraction is 2/5, which means that the spiral takes five branches to spiral two times around the trunk to complete one pattern.

DIY Homemade Tesla Coil Check our facebook page for updates and special offers The aim of this design was to get the highest voltage (or longest arcs) possible from a single self contained unit. Check out the new 1kW Tesla Coil! WARNING: High Voltage Device! How I built an electricity producing wind turbine Several years ago I bought some remote property in Arizona. I am an astronomer and wanted a place to practice my hobby far away from the sky-wrecking light pollution found near cities of any real size. I found a great piece of property. The problem is, it's so remote that there is no electric service available. That's not really a problem.

8 Completely Awesome DIY Home Energy Projects Small-scale renewable energy is a must for a sustainable home – but converting your home to clean energy options can carry a huge initial price tag. We’ve scoured the web for some of the most innovative examples of homemade energy solutions to compile a collective list of DIY projects to make your home greener and more energy efficient without costing you a fortune. From solar water heaters and gadget chargers to homemade super-efficient refrigerators, you’ll find links (with instructions) to some of the best projects you can make at home…

Wind Turbine Permanent Magnet DC Motors - Working Principle Wind energy, being one of the most important renewable energy sources, and wind turbines, which are necessary for producing wind energy, are very important in today's environmentally aware world. Below we outline detailed information about generators, with many power options right up to 7 MW, as well as one of the most important components of wind turbines and motors that is used in place of generators in individually made wind turbines. Permanent Magnet DC motors are the most important components that can be used in place of generators. The magnetic fields produced as a result of the spiral movement of the magnet within the component is that which produces electricity. Why Use a Motor to Generate Electricity? The most important reason is that it is cheaper than electric generators and it also contains many components we utilize in our daily lives.

Hydropower from Reuse Reused: a small stepper motor as found in a printer 2 discarded CD-ROMs a foam tray some long stick (I used a piece of 20mm diameter PVC tube from demolition) a LED one or two tie-wraps a small piece of scrap paper Non-reused: The only non-reused part is the hot melt glue (I recommend the low temp type, especially when working with kids). Tools: scissors, screwdriver to disassemble the printer (not shown), cutting pliers or desoldering tools for (optional, not shown). With a bit of luck the LED can also be found in the discarded printer. With even more luck you can find some discarded electronics with a LED standing tall on a printed circuit board, with most of its legs still intact, instead of mounted flush on the board. This makes it easier to remove from the print (leave the legs as long as possible) and easier to connect to the stepper motor by simply inserting it in the plug.

Beginners Guide to Solar This is a simple introduction to help you decide what you need and how to do it. Firstly there are two different types of set-ups Off Grid and On Grid. If you live remotely and want your own independent power source then you want an Off Grid set-up.

Window Socket – Solar Energy Powered Socket by Kyuho Song & Boa Oh The Window Socket offers a neat way to harness solar energy and use it as a plug socket. So far we have seen solutions that act as a solar battery backup, but none as a direct plug-in. Simple in design, the plug just attaches to any window and does its job intuitively. Designers: Kyuho Song & Boa Oh DIY VAWT In this project, we will build a small DIY VAWT, Vertical Axis Wind Turbine. We are not expecting to get much over 50 watts of production, though it would be fairly simple to double the size of the blade area to increase power. This DIY VAWT is based on the use of 4 inch PVC pipes, cut in half, for the blades. The blades are mounted on bicycle rims. This structure is then mounted using 2x4's and a DC treadmill motor is connected at the bottom, via a belt. The belt connection allows for an increase in RPMs to the treadmill motor.

DIY non-hub builds, the why and how (part-1) Common hub motor kits have a simple construction, which keeps the price low (especially with Chinese mass-production). The low price and easy installation makes them the big seller by a wide margin. However, if you want a build which has unusually good efficiency (so a smaller battery can provide longer range), or…you want unusually good hill-climbing…a non-hub drive system just might be necessary to deliver your goals. Be aware that a non-hub system will by definition be more complex, probably more expensive, and is likely to be noisier.